Hank Campbell
I play guitar but I don't play out for money. Aside from a high level of stage fright about playing guitar in public I think doing it for money would take away a lot of the relaxation.

That doesn't apply to all things. I write every day and always enjoy that. So at first blush I might be inclined to think a job tasting beer would be a bad thing, but perhaps it is just like writing and if you would do it for free anyway, you might as well get paid for it.

She's not one of those pathetic lonely drunks, though, she drags coworkers along.

Her job, with three others, is doing quality assurance in the beer lab at Boulevard Brewery, the nation's 10th largest craft brewery. And making sure beer stays in harmony is a big part of that.

If you go to a novice beer maker and taste their goods, some things will stick out; it will be really hoppy or some other quality will be exaggerated. Like a graphical design person with a new Photoshop plug-in or a guitarist who got a new effects box, it takes some time to learn how to not do too much with beer. There's a reason Budweiser sells so much; it all works together. 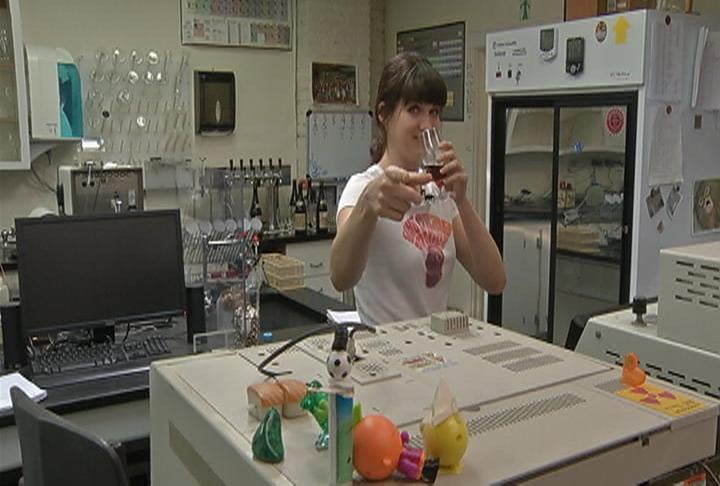 Elizabeth Belden. What does she weigh, about 80 pounds? I'd be the size of a house if I drank beer every day. She is probably smart enough to just taste it. Credit and link: KCTV

Beer is biologically complex, with some 10,000 different compounds in the brewing process. That is a lot of knobs to turn badly, scientifically speaking. And that is without trying to anticipate things like sensory fatigue. It's one thing to have a beer taste less awesome on the second one, quit another to have it taste bad.

What did her parents say when she told them her college degree was going to be utilized tasting beer? "Don't tell grandma."

And what does she do to relax, since drinking beer is her job? Roller derby, on the Black Eye Susans team. Because nothing sounds better after a hard day on the job drinking beer than engaging in some semi-violent sport.

The Science Of Beer Foam

Super Bowl Science: The Only Thing That Could Make Beer More Awesome

Weekend Science: Will Your Beer Survive A Nuclear Blast?

Jurassic Beer - How Long Does It Take To Get A Good Brew?

The Carbonator Bottle - Make Beer On The Go

Only One Thing Could Make Beer More Awesome - Preventing Cancer

Beer Proteome Deciphered - Get Your Peptide Goggles On

Research Shows Beer Runs Are Good For You

Or see hundreds more articles, because beer is that important.
Science 2.0
More Articles All Articles
About