Hank Campbell
Fantasy baseball as fans understand it today began in the 1980s but actual fantasy baseball, beyond kids trading baseball cards, began 50 years ago.   Hal Rickman, an accountant in New York City, started finalizing  work on something he had begun when he was much younger.   It was Strat-O-Matic Baseball.

Rickman told USA Today's Mike James that as a young boy he rolled dice 5,000 times to make a table of probabilities and looked at baseball statistics in the newspaper to match probability to performance and see what would happen.   In 1961 he started producing the game and later the year Roger Maris would eclipse the ghost of Babe Ruth for the single season home run record.

It may seem counterintuitive in today's market, but in 1974 it was much cheaper to play baseball than to buy Strat-O-Matic.  Not that it was expensive, it sold well by then, but in a poor family playing baseball is free and games are not.  So I never owned one but I watched that year as Hank Aaron made the march on Babe Ruth's other big record - most home runs in a career.

But both Aaron and Maris were in different circumstances than Babe Ruth.  Ruth played in 154 games his 1927 season, for example, where Maris beat him using 162 games in 1961, and Aaron had to compete against black pitchers and players and travel all over the country while Ruth did not.    How do you resolve that?   Probabilities, of course.   That's where Strat-O-Matic Baseball brought fantasy aspects to life.   You could, for the first time, have Maris and Aaron and Ruth hit against Cy Young and see who was really better.    Since these were probabilities, the results would vary each time but they gave fans a way to see what "what if?" scenarios.

I finally did buy Strat-O-Matic baseball because, with the numbers in my head, I watched Barry Bonds put up an obscene performance in 2001 - 73 homeruns with an On Base + Slugging Percentage of 1.379.  Bonds will have his detractors because of steroid allegations but you don't get intentionally walked 120 times in a season because of steroids, nor do you hit so well for so long.   Steroids may allow you to heal faster and play more games but they don't make you hit better, and amphetamines in the 1960s were a similar issue in baseball.    Mickey Mantle was knocked out of the home run chase in 1961 because of medical quackery so athletes seeking a way to stay in sports is not a recent development.

Just covering the basics, essentially in Strat-O-Matic you roll a 6-sided die to see whose card you use, the hitter or the pitcher, and then two other six-sided dice tell you what will be resolved.  So if the first die came up a 1 we go to column 1 on the card, add up the total of the other two dice and that is a result.    If you have a grasp of the numbers you can see how wonderfully overwhelming his season was.   And it works because of the care they use in assigning probabilities - there is no "grey literature" in baseball, fans know their stuff and there will be open revolt if the game resolution is flawed.   It has good and bad luck, of course, and even streaks and slumps, but this can't just say the equivalent of the Himalayas will melt by 2035 to a journalist and have it show up in an IPCC report as fact.

Baseball is well-known and easy to understand and calibrate the results.  That is the reason one of the earlier popular computer games was BASBAL ( the PDP-10 mainframe in 1971 had a 6 character length name restriction) and was essentially Strat-O-Matic on a PC.     Baseball Strat-O-Matic is a simulator with probabilities and luck is only part of it so even on a one-off basic there is an 85% chance that what occurs in the game would have occurred in an actual game that was played.  That's the power of being able to quantify things in order to get accurate simulations.

You can actually use something like a calculator to simulate your own baseball game.    Here is why.  In baseball, when a batter comes to the plate, there are 24 possible states.  For example, a man could be on first with one out, etc.   I won't list them all and get carpal tunnel syndrome writing what only three of you will bother reading before moving on the the next paragraph.  Batting statistics are then expressed as a probability along a line segment.

By using two dice, for example, Strat-O-Matic has 33 possible combinations so knowing that Barry Bonds in 2001 had a 15.3% chance of hitting a home run (73 home runs in 476 at bats) if each sum of the dice has just over a 3% of occurring he should have around 5 spots listed as home run.

You then use probabilities to resolve which next state will happen and write it down.   It is that simple to simulate a baseball game.

But some folks at Champlain College have gone a little farther.   Take those 24 initial states and make them an equation and here is what you have: 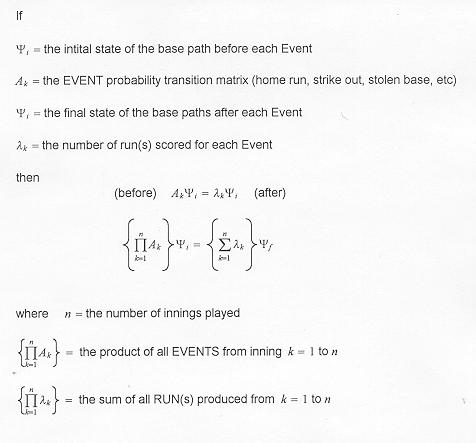 If that looks like Schrödinger's wave equation to you, you are not alone.    They went beyond simulation and made the entire game an equation.     Yes, they made baseball a quantum effect.  Quantum Baseball.

But would that mean there are Einstein-Podolsky-Rose correlations for baseball as well?    Surely my watching the game has no effect on the game, right?    That's for better minds than mine to figure out.
Science 2.0
More Articles All Articles
About