Hank Campbell
Like with emissions-free, white-collar astronomy jobs, it seems strange that anyone would protest emissions-free alternative energy, but in the United States it faces an uphill battle. On one side environmental groups lobby for it, while on the other, different environmentalists wait to file lawsuits and if they aren't paid off quickly, it could take years to resolve in court. San Diego Gas&Electric learned that in 2006 when they tried to run power lines from a solar farm in the Mojave Desert and environmental lawyers prevented it - after the utility spent $125 million.

In the case of the developing world, the lack of both entrenched energy constituents and environmental lawyers may be a good thing.

When the cellular market was first taking off, there was a lot of American hand-wringing about infrastructure. In the 1990s, it was noted as a cause for alarm that Brazil was beating the U.S. in cellular uptake. For most people that was a 'so what?' moment because everyone in the U.S. knew why wireless would take longer here - Brazil never subsidized landlines to every remote rural area the way the U.S. did and so they had no legacy infrastructure that was already 'good enough' for most people.

A similar lack of entrenched constituencies in energy may be better for everyone in developing nations. A country that has little coal is not really benefiting from coal or natural gas plants because they have to import it. So if the developed world makes an "investment" in the third world that then has a high recurring cost for local citizens, it isn't beneficial.(1)

The developing world also provides some real proof-of-concept. It is great for environmentalists to insist solar and wind are ready right now and that the need for continued subsidies and mandates will go away if we just keep subsidizing and mandating, but they said the same thing about ethanol 20 years ago and natural gas and solar before that.(2) Currently, developed nations are installing alternative energy, but it is mostly for show. Germany added solar but then stated they were dropping nuclear, so now German fossil fuel companies are making billions with "instant on" capability to prevent brown-outs and the country is importing natural gas extracted using the fracking German politicians claim to environmentally oppose(3). German CO2 emissions have risen and even France is ridiculing them for their increased pollution.

If alternative energy is viable it will be obvious in countries where there is no financial sleight-of-hand and nonsense about 'embedded' value of solar power replacing the actual money citizens spend. Countries like Thailand and Bulgaria have recent uptake in alternative energy and if it works they may be able to show the path for the rest of us. While in optional technology like cell phones, it is always necessary for rich countries to have uptake first in order to bring the cost down over time, in energy it may be better for developing countries to lead, because they can get something done without lawyers masquerading as environmentalists seeking graft.(4)

A new analysis from Pew shows that 100 nations outside the big 20 got $62 billion in alternative energy funding from 2009 to 2013. 45 percent of that was in 10 countries, and led to an increase in alternative energy capacity of 91 percent. Joining countries like Bulgaria and Thailand were Ukraine, Kenya, Peru, Taiwan, Morocco, Vietnam, Pakistan, and the Philippines. 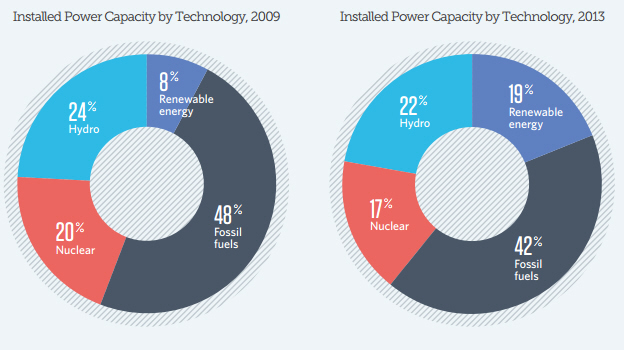 That alternative energy was wind and solar for the most part, but hydropower, another technology that has fallen out of favor with U.S. environmentalists, got $2.1 billion in 7 countries, the bulk of it in Viet Nam. Thailand led in biomass, Kenya added geothermal and Pakistan added nuclear.

Obviously the largest economies still lead in adding alternative energy, the G20 installed 90 percent of it in the past decade, but countries like the U.S. have shown big declines in CO2 output while the world's output has increase. The Obama administration signed a bizarre agreement to allow China to emit pollution unchecked through 2030 while we cut back even more, which is bad economics and even worse environmentalism, so our products will continue to be made elsewhere with no environmental protection in order to keep environmentalists happy.

Outsourcing clean energy will offset some of the environmental damage that would otherwise result from strange U.S. economic strategies.

(1) Californians have discovered this. They now have 50 percent higher utility costs than other states because of green energy subsidies - and can't build desalination plants to offset the drought because of both environmental lawsuits and high energy costs.

(2) The only one they got correct was natural gas - and both ethanol and natural gas they turned against after they became popular.

(3) As New York hypocritically does with Pennsylvania next door.

(4) Only the politicians are seeking graft, but that is still half as many people holding projects hostage.
Science 2.0
More Articles All Articles
About