Hank Campbell
20 years ago, nuclear science died a horrible death at the hands of President Clinton and Senator John Kerry. It's science fiction fantasy to imagine now what nuclear science would be like if the last 40 years had been spent with American ingenuity and technological prowess tackling the issue, rather than it becoming a political football to placate anti-science activists before finally being killed off.

Its legacy haunts us today. With nuclear energy blockaded well before that, and modern hydraulic fracturing not yet created, America had to rely more on coal. Environmental groups never accept any blame for the U.S. rise in CO2 emissions, but it rests squarely on them as much as it does on automobiles.

And their lobbyists still retain a vice grip on our science policy. One of the most thorough science projects in history, the study of Yucca Mountain, has been suppressed by the Obama administration and the Nuclear Regulatory Commission today seemingly exists to block nuclear regulation. The person who runs it, Allison Macfarlane, knows nothing about nuclear physics and was chosen for the job because she wrote a book lobbying against Yucca Mountain, while one of the NRC team is the former head of the progressive advocacy group Union of Concerned Scientists - anti-nuclear activists shape our nuclear future.

But American business can still be creative and UPower Techologies thinks it may have a way to get nuclear energy going again without being blocked by Democrats; a modular nuclear thermal battery that works out of the box to drive any energy source needed. Most energy generation is steam, for example, and their 1 MW of co-processed heat can power an military base, where generators are common, which will power the entire operation without having to use generators powered by fossil fuels.

The best part: it is a self-contained, Fukushima-proof, bomb-proof battery, there is no coolant, no pumps, no external pipes - nothing to melt down.

The battery will last 10 years and then the same material can be recycled 7 times. In 70 years, Yucca Mountain might even be approved, and we might not have nuclear waste stored at over 100 individual sites of suspect integrity. 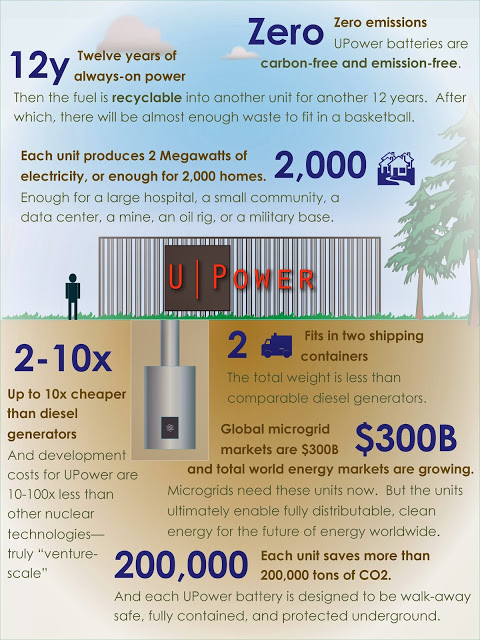