Hank Campbell
Bottlerocket in New York City, the coolest wine store on the planet, is having a book signing with the coolest futurist on the planet (and Scientific Blogging fave) David Houle. Meanwhile, Howard Bloom has been holed up in a cave working on his latest magnum opus - I am sworn to secrecy but it somehow ties together Osama Bin Laden, Michael Jackson and a unified theory of pretty much everything. So there's a sweet SB coffee mug on the line for anyone who can get him out of Brooklyn and into a picture with both of them wearing their Scientific Blogging shirts. 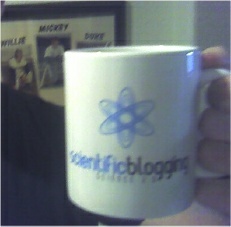 Otherwise, you can still go buy Houle's book and get it signed. With a map: http://www.timeout.com/newyork/events/readings-discussions/59634/david-houle
Science 2.0
More Articles All Articles
About