Danna Staaf
On the day after Squid Day, I got mail from the publishing company Immedium*, letting me know they'd just come out with a new children's book: Sid the Squid and the Search for the Perfect Job. It might be of interest to me and my readers. Would I like to preview a pdf?

Flattered beyond all reason by the suggestion that I have "readers," and obsessed as I am with both squids and literature, I answered with a swift affirmative. (Apparently I was not the only cephaloblogger thus recruited.) 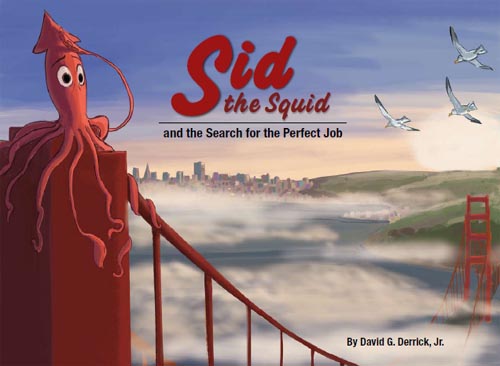 On the first page, we meet our hero: "Sid was a giant squid who lived in the depths of the ocean. He had ten useful arms, more than a turtle, a sea spider, or even his cousin the octopus."

Wait a minute--squid don't have ten arms! They have eight arms and two tentacles.

What's the difference? Arms have suckers all along their length, while tentacles only have suckers on the flattened tip, called the tentacle club or manus. Arms cannot be extended and retracted, while the elastic tentacles can. When fully elongated, tentacles are longer than arms. I always give kids this mnemonic: the word "tentacle" is longer than the word "arm."

What's striking is that the author/artist, David Derrick, took pains to accurately illustrate the two different types of appendages. In many of the drawings, the be-suckered arms are clearly distinguishable from the longer, more slender tentacles. (Although in one illustration an appendage is clearly shown with both a club and suckers along the whole length--oops!)

So why get it wrong in the text? After agonizing over this, I realized that maybe it's not as important as I think it is. Maybe if I just take "arms" to mean "appendages," I can accept that Sid does in fact have ten useful arms.

(But how many useless arms does he have?)

Sid's many arms are made much of throughout the text, as his primary asset to offer potential employers. The book chronicles the squid's search for a job, assisted by an enthusiastic little girl named Alice with whom I would have totally identified as a kid. (Okay, let's be honest, I can still identify with her.)

Sid tries a number of different professions, all of which seem "perfect" at first, as they put his arms to good use. But what about the rest of the squid's anatomy? For example, when Sid gave firefighting a try, did he forget that he's got a built-in high-pressure nozzle? Squid swim by jet propulsion, filling their body cavity with seawater and then squeezing it out through the narrow opening of their funnel. But instead of using this natural feature, Sid just wraps his ten "arms" around ten different fire hoses.

Of course, firefighting doesn't work out for him--too hot and dry--and neither do any of the other jobs he tries. Finally, when Sid and Alice are about ready to give up, a chance encounter brings him to his dream job, and everyone lives happily ever after.

Does the story have a moral? Definitely, according to Immedium. In the press release they call Sid "an inspirational hero for our times," suggesting that with this book, "Kids are encouraged to try many activities and pursue their dreams."

Well, okay, but that's not really the message I got. If you want to look for a moral in this story, I think perhaps a more valuable one can be found in Sid's generous spirit. Above all, he wants to help others, and that unselfish desire is eventually what finds him the right job.

The art is gorgeous, expressive, and for the most part scientifically accurate. The writing is acceptable, but not outstanding--no big surprise, as the author is a professional artist, not a writer.

Would I read Sid the Squid to my kids? Absolutely. That is, if I had kids.


* I think I see where they were going with the company name: a portmanteau of medium, like an art medium, and imagination, or perhaps immediate, like instant gratification. But having just returned from tropical climes, where every smart traveler packs Imodium, I have to say it's a kind of unfortunate name.