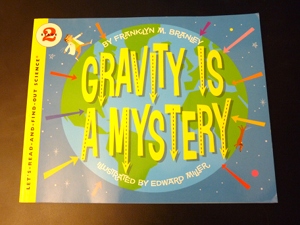 Gravity continues to work fine, even though we don't know why. Newton wrote down the first calculus based description. Gravity worked at a distance for reasons beyond our reach. Einstein developed a more accurate description with a little help from his friends, including Grossman, Hilbert and Schwarzschild. "Matter tells space how to warp. And warped space tells matter how to move" is John Wheeler's circular logic jerk. My own work suggests gravity is all about doing close to absolutely nothing, pushed to do trivial harmonic motions because there is other stuff in the Universe. In this blog, I will focus on what it means to be all alone, then what happens when someone else crashes into solitary confinement. 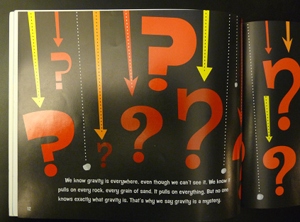 The title "Gravity is a Mystery" comes from the "Let's Read-And-Find-Out Science" series. I bought about thirty from the series for my soon to be three-year-old daughter. She likes the pictures and new vocabulary found in these science books. To quote from this seminal work:

As a "stage 2" book, this is aimed at children in the primary grades. The lesson still applies to grad students working on strings or loop quantum gravity who will be stuck with Wheeler's Wheelerism. Readers of this blog can break out of that trap and think on our own.
click or skip this reading of the blog
Imagine a brain isolation experiment. No information from the outside world goes in. The optic nerve is blocked. Auditory sounds are silenced. No physical feedback of any sort happens. Information might go out, like screams, but without information coming in, one could not tell if the screams were made. This could be a lost story of Poe or a Tibetan monk practice.

Spend a few cycles breathing and connect to nothingness.

What math could be used to directly describe the experience? There is nothing to look at and count. The geometry of the ancient Greeks cannot be drawn.

Do math with time. The most basic operation is addition. Getting older is unavoidable. Getting older adds more time to one's history, over and over again. Subtraction is the door to the moment before. This is not time travel. Instead subtraction is a method to reference one's own history, a history that requires memory.

How far back in time can one go? The personal limit is conception, not that one had a working memory back then. The DNA in germ cells goes back to mom and dad, which in turn goes back to their mom and dad, and so on. This tenuous DNA link stretches to DNA's overthrew the RNA world, a date biologists will never know since the victor eats the loser. However life pinballed out of the organic primordial soup, there were atoms that coalesced to form the Earth four billion years ago. Our atoms were there for the most part, having endured a supernova together. These ephemeral links goes back to the big bang, 13.6 billion years ago. Science at this time is clueless to spacetime before the big bang.

The future has a similar feel. The personal story ends for all reading this in a hundred and twenty years, most less than that. As long as a person is an active participant in producing progeny, their germ line marches on, at least for a while. I have a vague memory of someone calculating the average time for anyone's children surviving through the ages. Given enough time, most family lines lose. The atoms should survive the Sun going through the red giant phase. So much future ahead that we play a minimalist role in.

Where there is addition, there is multiplication. Multiplication is a faster way to count time. There are different rates to count time, from picoseconds to centuries. Multiply mini numbers or huge numbers or both. Imagine a 12 part beat, and a thirteen part beat, matching every 12x13=156 beats, as Feynman did on the bongos. Oops, there are no bongos in brain isolation.

Where there is addition and multiplication, there are polynomials. Give a mathematician a polynomial, and he can build almost any function. The world of polynomial graphs becomes a world of rhythms. The entire tradition of real numbers can be rebuilt with time alone. Time is a totally ordered set, each moment either before, after, or exactly equal to another moment in time. A life in brain isolation could be full, with far too much to do.

In this thought trip, the brain isolation is spontaneously broken by a glowing blob. How far away is the blob? That is not clear since there are no other references to use to gauge the distance. What math can now be used now that there is the blob? All the real number work still works. New operations are possible, like counting discrete blobs. Using mirrors, there is a new kind of negative, a negative location in space. The negative depends on the location and shape of the mirrors. Math wonks would talk about the choice of basis vectors and origins, but that is same thing. Space does not become a totally ordered set until those arbitrary choices are made.

Where there is addition, there is multiplication. There are multiple ways to multiply. One type of multiplication takes into account the handedness of things in spacetime. This sort of multiplication is not often taught, going by the name of a quaternion product. Real and complex numbers are the popular girls, used by everyone. Mentioning a quaternion product has been known to piss people off, going all the way back to Lord Kelvin. The spirit of spitting on quaternions is alive today. The man who re-purposed the word for four Roman soldiers oversold their importance and under-delivered their utility. He died of alcoholism. Critics have buried the quaternion work, using Gibb's fractured rehash known as vector calculus which dominates math today. I am retro, preferring multiplication that has multiple parts - some that are about handedness, some about stretching pointy things, some about how old something is. Bringing time clearly and consistently into the tools of geometry may be my most simple and radical idea. The idea is not novel. My sense is that people do not embrace the math of the transitory. Like the Romans, researchers want permanent truth they can point to. My life is fleeting like the math I use. There always needs to be a place at the table for time in my world view. Truth is temporary.

Light can be used to push like charges apart or pull different charges together. Gravity "..pulls on everything" without pushing, which is a vital clue to why gravity is a mystery. What I have studied is a product of spacetime far more obscure than the unpopular quaternions. This product has no minus signs, the math tool needed for repulsion. Time only knows how to step forward, creating sum after sum, so we all age together wherever we are. What I call the California product is time addition's multiplicative cousin, a product that is all sums. There is no sense of handedness. When the California product is used in the same machinery as was done to generate the Maxwell equations, out pop similar but different equations. The spacetime wave equation is gone, where the changes in time exactly match changes in space. The replacement in the static case is...Newton's law of gravity. Exactly, no gauge games needed. (I will blog about the gauge symmetry issue in two weeks, Nov. 8).

Instead of a wave equation, in static, nearly flat spacetime, one can choose to write a solution like the was known to Newton (except that it is a 4-vector, an important difference), or as the exponential metric due to what I call the potential/metric duality. In other areas of physics, duality is BIG, when two seamingly different approaches end up with the exact same math. To quote Sascha Vongehr's description of duality:

No one other than my graduate student buddy has written to say they see this potential/metric duality (Sascha included, so his quote is no endorsement of my work on gravity). I cannot force anyone to take the divergence of the Christoffel symbol of the second kind of the exponential metric, except my friend in England who confirmed the calculation independently. Until people do that calculation, no one is boarding this train.

So I ride on, getting older with all the stuff around me in the basement. The Earth has more stuff, the more aging, the more pull. All players have their own history and a requirement to account for all others. The result is a few exponential functions with joke small exponents, meaning that the math returns a one. Sorry, an almost one. This almost drives the desire of all atoms to take an hour and a half journey to the antipode and back again.

There is a 6400km traffic jam to the center of the Earth. The Earth itself oscillates around the way bigger Sun, taking a year every time, four billion times so far.
Gravity will keep working regardless of the value of my efforts on the subject.

Bet against the Higgs being found, buy the t-shirt

[Sorry, no go Houston] Next Monday/Tuesday: The Precession of the Perihelion of Mercury Calculation

Due to [un]popular request, I will do gauge symmetries and force equations next Monday/Tuesday.
Sorry, no go again...

Topic: Changes required to get the force equation right.