Doug Sweetser
My work on gravity received a fatal blow in the Spring of 2007. A patient, creative exploration in the neighborhood of a deep truth might find an alternative expression to dodge the bullet that killed my math haiku. This blog tells the story.

The cranial trauma was caused by a vector current coupling term in the Lagrangian, JuAu. An analysis of the phase reveals the mediating particle is spin 1. Like charges repel for forces mediated by spin 1 particles. Like charges attract for gravity. Therefore my proposal "violently disagrees with observation." Gravity must be mediated by spin 2 particles so that like charges attract.Click or Skip a reading of this blog

A keynote-address-grade professor delivered that blow in a testy exchange of some 30 emails. I have a confession: I did not understand quantum mechanical spin projection operators. I had spent zero time thinking about the current coupling term since it is all of two letters long. I got blind-sided. No one was born understanding spin projection operators. It would be interesting to know what percentage of readers of Science20 with PH.D.’s in physics know the vector coupling term means the interaction is spin 1. My guess the percentage is low or else a doubtful chorus would have been heard by now. By the end of this blog, the simple bit of algebra behind the frightening jargon will be explained.

Sidebar: Rules for quaternion and hypercomplex products.
My second blog contrasted these two.
Briefly, a quaternion is a mashup of scalars, 3-vectors, and complex numbers:
Hypercomplex products have the same dance partners, but there is not a minus sign in the house, not even in what I call the symmetric cross term:

The all positive sign outlook might be the root reason gravity only attracts. Gravity is the universal love force. The strength of the love is beyond pitifully weak, a good thing.

Lorentz invariant scalars go into Lagrange densities. One can use either product to get the same scalar: 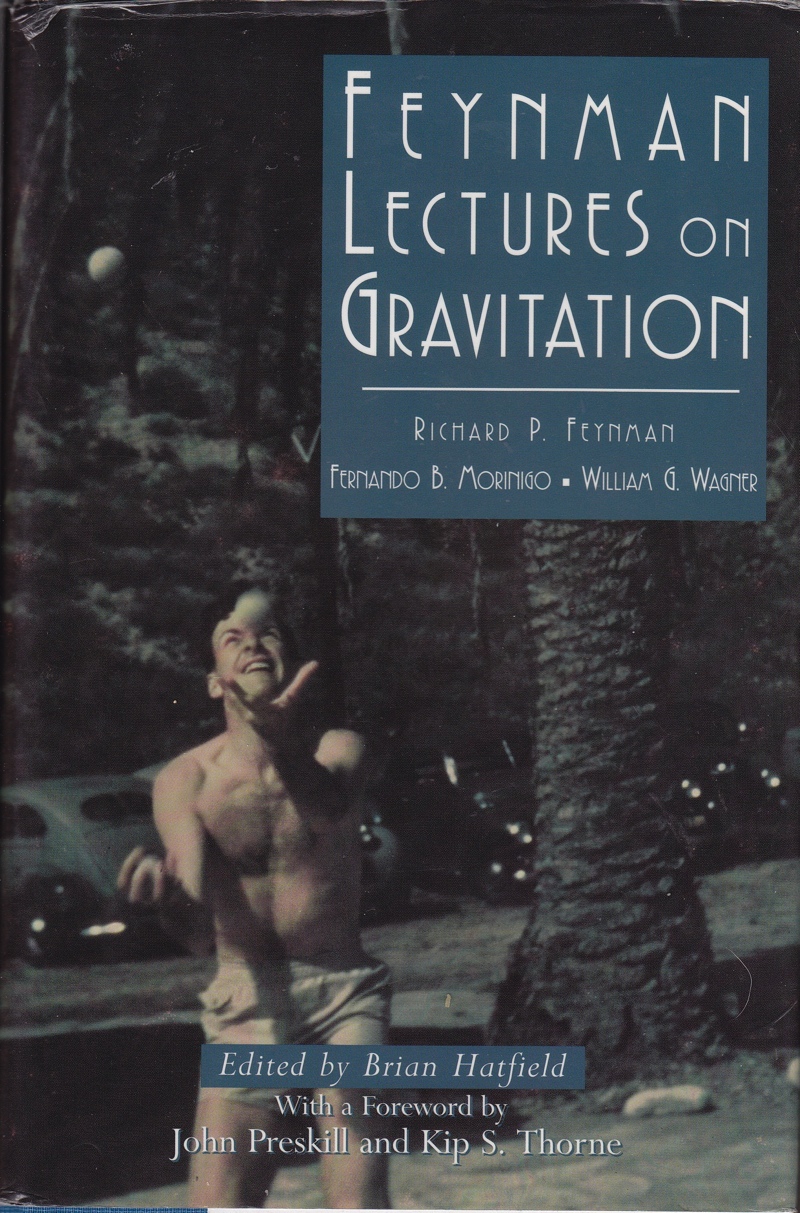 A way to understanding spin 1 and spin 2 quantum mechanical spin projection operators is to read chapter 3 of "Feynman Lectures on Gravitation". I spent several months on ten pages. I struggled to map between 4-vectors (4 slots) and complex numbers (2 slots). Sure, I could do it the standard way as taught by the master. However, I am an accounting jerk. If one has a 4-vector current, one should use a number that also has 4 slots, the quaternions. What goes on in the text is typical and accepted, but looks like sloppy accounting to me. At one point, the current density along the x axis is treated as a real number, while the one along y was imaginary. Sounds like an arbitrary assignment to me. When the product of x and y is formed, an imaginary value is generated, but not one specifically aligned to the z axis as a cross product would dictate. Feynman gets the right answer, he is Feynman after all. I will use quaternions and hypercomplex numbers because the accounting rules have no ambiguity.

We start with the spin 2 projection operator because Feynman has an incredible reduction of this creature as one complex product. He was analyzing a current moving along the z-axis. One of the effects of special relativity is to generate virtual currents along x and y.  A spin projection operator has these two currents, but they neatly cancel out.

One might be afraid that the math here is going to get super difficult. Feynman has the insight to make it look trivial. Here is the relevant passage from page 39 of the book. 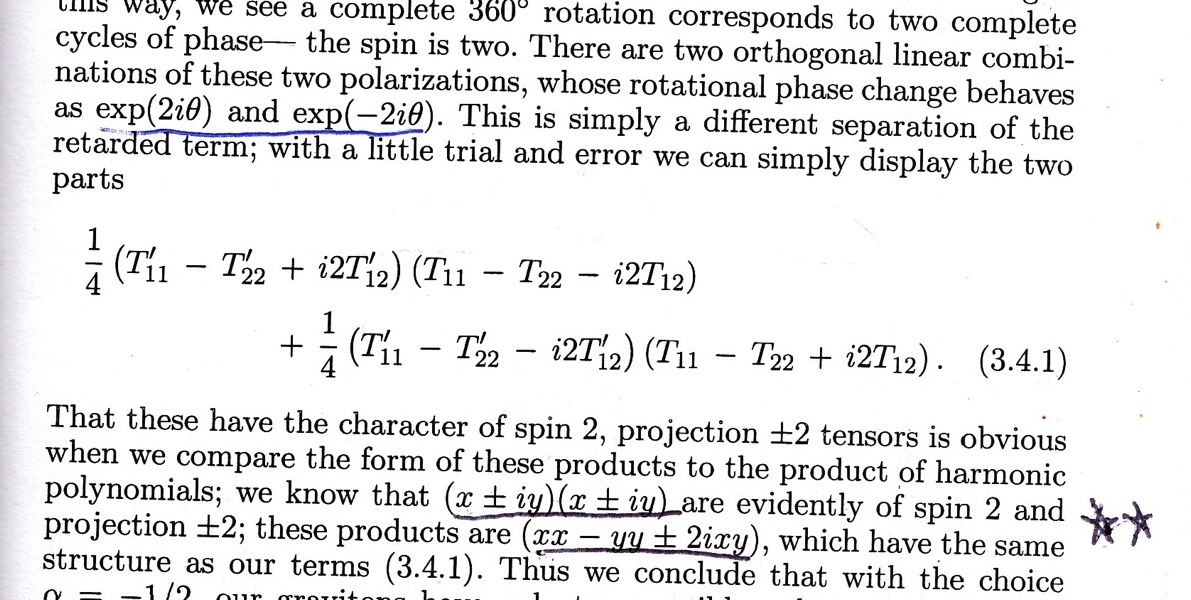 He is looking into quantum mechanical spin 2 projection operators created by virtual currents. The jargon sounds scary. Feynman says it is no more difficult than this bit of complex algebra:

It is the factor of +/-2 in the imaginary that is the sign this expression applies to spin 2. To make a projection operator, there needs to be no imaginary part, so combine these two.

Repeat this exercise with hypercomplex products:

Equation 7 using hypercomplex products represents a way to write a quantum mechanics spin 2 projection operator. It is different from equation 5 which was a Feynman heuristic argument. 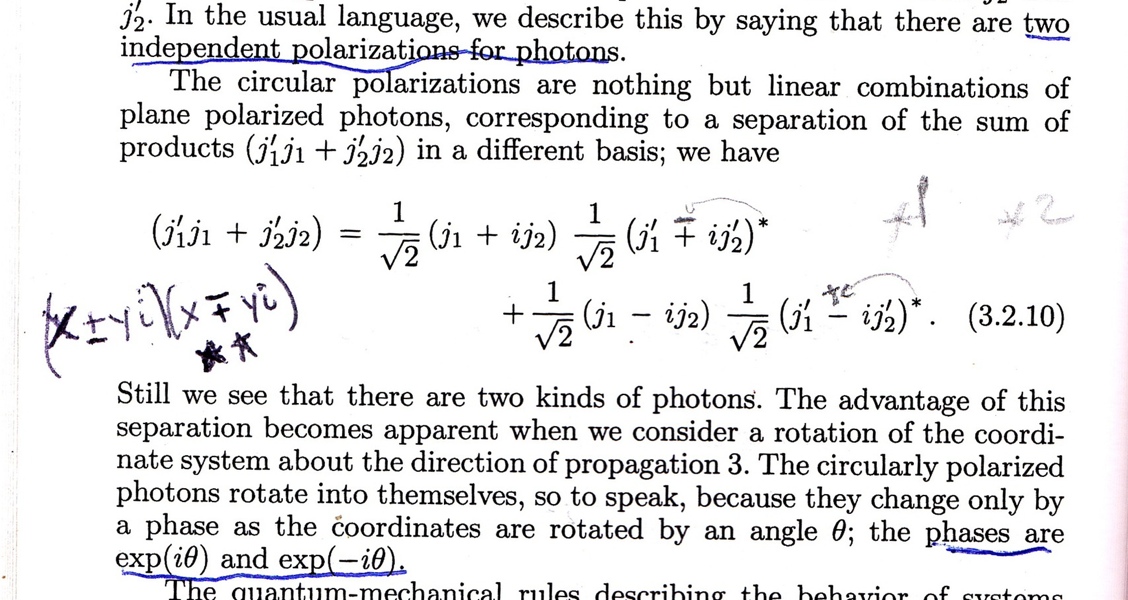 This equation can be done with quaternion products. Break the steps into smaller pieces so what is happening can be seen:


This time the constants in front of the imaginary are +/-1. That is why this is the spin 1 projection operator.

Here is a recap for those keeping box scores on Lagrangians. This is my Lagrange density for the Maxwell equations using quaternions:

My proposal for gravity uses the hypercomplex product, quite similar but with a different use of conjugates:

The unified GEM Lagrangian is not a trivial addition of these two:

Both of the field strengths are dependent on the gauge, but the overall Lagrangian is gauge independent as are the field equations that result from applying the Euler-Lagrange equations.

In the art world, a typical museum visitor spends ten seconds looking at a painting. The artist may have spent months or years creating the work. Aware of this behavior, I revisit pieces, look at them from different angles, try to get my eyes to see.

I feel the same way about this tryptich of Lagrangians. I like to see the spin, not only in the current coupling terms, but in the field strength terms as well. The required gauge independence is created in different ways. The most fun is trying to embrace the big picture, the wtf is this all about. My sense is that the Lagrangians represent an exhaustive accounting of all the ways sources can play with potentials using multiple ways to multiply, looking at all ways a spacetime potential can change in spacetime. My mind will not be able to appreciate all of Nature's moves.

I feel confident that the hypercomplex vector coupling term spins away from the spin 1 bullet. The GEM Lagrangian requires no Higgs boson.  Here is one person's guess at my odds of succeeding:

Next Monday/Tuesday: Pointing to Gravitational and Inertial Mass in a Lagrangian