Steve Hentges
Based on a recent and fascinating scientific report from Switzerland, you might start to hear demands to eliminate mild mustard from our diet. The Swiss Federal Food Safety and VeterinaryOffice (FSVO) recently reported that mild mustard contains the chemical bisphenol F (BPF). Remarkably, BPF is not a contaminant introduced from packaging or other sources, but apparently isproduced from a component naturally present in mustard seeds when the seeds are processed to make mustard.

As suggested by the name, BPF is chemically very similar to the well-known substance bisphenol A (BPA) and both have been shown to be weakly estrogenic. In light of repeated calls to ban BPA based on claims that it causes health effects at low exposure levels, could calls to ban mild mustard based on the same safety concerns for BPF be far behind? Not necessary, according to FSVO, whoconcluded that “[t]he risk of BPF to human health … is probably of low concern.”

Importantly, FSVO also concluded that “these unexpected and surprising findings may shed a new light on the risk linked to … the controversially discussed BPA.” That new light supports the conclusions of government bodies worldwide that have reviewed the extensive science on BPA and,consistent with the FSVO perspective on BPF, concluded that BPA does not present a risk to human health.

Until recently, bisphenol F (BPF) was only obscurely known as a synthetic industrial chemical that is used to make certain types of epoxy resins and coatings. Not nearly as well known as bisphenol A (BPA), the two chemicals have similar names and chemical structures, and are known to share certain biological properties.Most notably, both BPA and BPF are weakly estrogenic, meaning they can bind to estrogen receptors in the body but with much lower potency compared to natural estrogens such as estradiol.

Due primarily to its weak estrogenicity, BPA has been intensively examined by thousands of scientific studies of all types. In contrast, awareness of BPF has only recently been growing. Many fewer studies have been conducted to date although increased awareness will certainly stimulate increased study.

The conclusions of numerous government reviews have been consistent in supporting the safety of BPA as it used today.

Representative of these conclusions is the perspective of the U.S. Food and Drug Administration with the simple Q&A: “Is BPA safe? Yes”

That straightforward answer is supported by FDA’s extensive research and analysis.

In contrast, no government safety reviews on BPF have been published, although some researchers have expressed the opinion that BPF is not safe.

What’s Mild Mustard Got to Do with It?

Earlier this year researchers with the Swiss Federal Food Safety and Veterinary Office (FSVO) published a paper in the scientific literature reporting that BPF was found in mustard at concentrations up to 8 mg/kg (ppm). The researchers were able to rule out the possibility of contamination from packaging or other sources.

Surprisingly, the researchers found that BPF in mustard is likely formed from a natural component of white mustard seeds (known as glucosinalbin) when the seeds are processed to make mustard. Accordingly,analysis of numerous commercial mustard products revealed that BPF was primarily found in mild mustards made from white mustard seeds.

Based on the levels found in commercial mustards and typical consumption of mustard,the researchers estimated human exposure to BPF.  Assuming consumption of 10-20 grams of mustard per day containing BPF at a typical level of 3 mg/kg, intake of BPF is in the range of 30-60 micrograms per day. As noted by the researchers, “[s]ingle servings of mustard sold in Switzerland contain 12 g” and “[i]t is very common to consume 10-20 g of mustard with a sausage in Switzerland.”

The comparison with exposure to BPA is striking. The current European Union limit for BPA in food, the so-called Specific Migration Limit, is 0.6 mg/kg, approximately an order of magnitude lower than the levels of BPF actually found in mild mustard. Typical human intake of BPA is generally considered to be in the range of several micrograms of BPA per day, also approximately an order of magnitude below estimated intake of BPF from mustard. 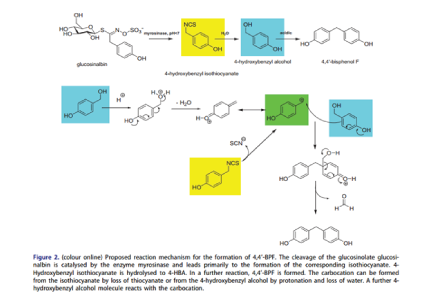 Is BPF in Mustard Safe?

Along with estimating exposure to BPF from consumption of mustard, the researchers also conservatively estimated a tolerable (i.e., safe) intake of 670 micrograms/day.Comparing this value with estimated typical and maximum intakes of BPF, and recognizing limitations in the safety database for BPF, the researchers concluded “[t]he risk of BPF to human health was assessed in a preliminary evaluation and led to the conclusion that it is probably of low concern.”Similarly, the researchers stated “probably most of the consumers will be in the tolerable range of intake.”

In a subsequent analysis, the German Federal Institute for Risk Assessment (BfR) concluded (translated from German): “After careful consideration of the currently available data and weighing the relevance of the data gaps, BfR concludes that a health hazard to the consumer through the consumption of BPF-containing mustard according to the current state of knowledge is not likely.” This conclusion was then echoed by CVUA Stuttgart, an official food control laboratory in southern Germany.

What Does This Tell Us About BPA?

Given the close similarity between BPA and BPF in chemical structure and biological properties, the implications of these new findings for BPA are inescapable. Indeed, the implications did not escape the FSVO researchers, who stated: “Our unexpected and surprising findings may shed a new light on the risk linked to the family of bisphenols and in particular to the controversially discussed BPA. BPF is structurally very similar to BPA and has similar hormonal effects and now we realise that BPF has been consumed over centuries in a popular condiment.” The researchers further note that “we are not aware of any study connecting mustard consumption with an increased risk for human health.”

Similarly, other experts more recently commented: “Suddenly, we realize that we have been exposed to the related BP-F in the same order of magnitude as BP-A by a popular delicacy for centuries.” In regard to the likelihood that BPF consumption is causing health effects, these experts also stated: “Thus, one could ask the question whether or not centuries of chronic low-dose or intermittent high-dose exposure to BP-F may have had a detrimental (endocrine) health effect in humans … However, this seems unlikely, as disease epidemics such as obesity and the associated diabetes type II have profoundly appeared only in the last two decades in North America and Western Europe.”

In contrast to the frequent calls to ban the synthetic chemical BPA based on claims that it causes health effects at low exposure levels, there has been no outcry to ban mild mustard based on the same concerns about naturally produced BPF. Nor should there be, and the implications for calls to ban BPA are also inescapable.