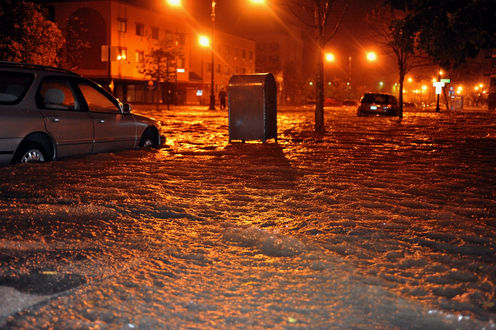 Hurricane Sandy pummeled cities along the east coast in 2012, causing billions of dollars in damage. Shutterstock

Climate change is as much an economic problem as an environmental one.

The effects of climate change, such as damage from more severe weather or health problems from higher temperatures, will impose a cost on society. On the other hand, moving away from a fossil fuel-based energy system will require significant investments into low-carbon technologies. How does society determine which efforts are most cost-effective?

My co-author Fran Moore and I looked at one of the main tools economists and policymakers use to attach numbers to the cost of climate change and decide what to do about greenhouse gas emissions in a study published in Nature Climate Change. Called integrated assessment models, or IAMs, these tools are designed to capture complex interactions among the physical, natural and social dimensions of climate change.

Economic models deal with the trade-off between the near-term costs of reducing emissions and the benefits of avoiding future climate change impacts. Reducing, or mitigating, emissions calls for a major transformation of energy and transportation systems to low-carbon technologies, as well as a shift to more sustainable agriculture and forestry practices.

But inaction has cost, too. Climate warming will lead to shifting weather patterns and extreme events, rising seas and a host of impacts to food production, water resources, human health and ecosystems that will unfold over many generations and vary widely across regions.

Our research demonstrates that how climate impacts are represented in these economic models matters for how we address the challenge of climate change.

Specifically, we find that ignoring negative impacts to economic growth could result in underestimating the magnitude of the problem – and the speed at which emissions need to be cut.

The monetary cost of climate change is typically represented in IAMs with a damage function, which equates some amount of temperature change to an economic loss. Damages can affect market sectors like agriculture, forestry, and coastal property as well as intangible goods such as biodiversity, environmental quality and human health.

Though IAM development began in earnest in the 1990s, quantifying climate damages has proven difficult, and current damage functions lack credibility and suffer from a limited empirical basis.

Significantly, traditional IAM damage calculations share the assumption that climate change only affects the level of GDP, not its growth rate. The distinction between climate impacts on economic levels versus growth is crucial because growth effects persist into the future, while level effects are transient. Said another way, a drop in GDP levels acts as a one-time claim on economic output, but does not directly affect the underlying productive capacity of the economy (and indirect effects are negligible). In contrast, damages to GDP growth rates will cause a permanent reduction in output, which compounds over time. This means that even small impacts to the growth rate can result in very large future damages.

Although this is fairly intuitive, this formulation has not been widely adopted in the IAM community, though three previous studies have illustrated the potential magnitude of growth effects. Our paper extends these findings by introducing new damage functions based on recent statistical studies discussed below.

Despite the fact that IAMs have not included damages to growth rates, recent literature suggests climate change could, in fact, slow economic growth.

Climate change could deplete stocks of social, environmental, institutional and economic capital through extreme events such as tropical cyclones or increased risk of civil conflict.

Climate change could also directly affect total factor productivity by changing the environment in which technologies were designed to operate and diverting resources away from R&D toward efforts to deal with climate impacts.

Finally, two empirical studies have found evidence for a relationship between GDP growth rates and temperature. In our analysis, we use the well-known Dynamic Integrated Climate-Economy (DICE) model with three modifications: we allow temperature to affect economic growth using the statistical method published by Dell, Jones and Olken in 2012; we account for society’s adaptation to climate change over time; and we partition the world into two regions to differentiate the impact in high- and low-income countries.

The headline result of this study is that our modified DICE model with growth-effects recommends a mitigation pathway that includes a rapid transition off of fossil fuels. In this model, emissions would be eliminated in the near future in order to stabilize global temperature change well below 2°C.

This stands in stark contrast to the classic DICE model “climate policy ramp” where mitigation increases gradually such that global emissions peak around 2050 and warming exceeds 3°C by 2100.

Another metric often used to measure the cost of climate impacts is the social cost of carbon – the economic damage caused by an additional ton of CO2 – which we find to be several times larger than previous estimates.

Media coverage of this study has focused on policy implications of the social cost of carbon (SCC). However, we are reluctant to draw these types of conclusions from our result.

The higher SCC estimate found in our study is not a definitive value, and thus is not intended to be the basis for action, either at the company or the regulatory level. Also, the actual values we report are subject to several caveats related to the modeling framework and other assumptions.

Instead, our key takeaway is that the social cost of carbon is subject to much more uncertainty than has been suggested in previous estimates. Specifically, the potential for slower economic growth from climate change has not been well studied or implemented in policy models. We hope this work encourages additional research to better understand and account for these potentially important growth-rate effects of temperature change.

Delavane Diaz, PhD candidate at Stanford University, does not work for, consult to, own shares in or receive funding from any company or organisation that would benefit from this article, and has no relevant affiliations. This article was originally published on The Conversation. Read the original article.