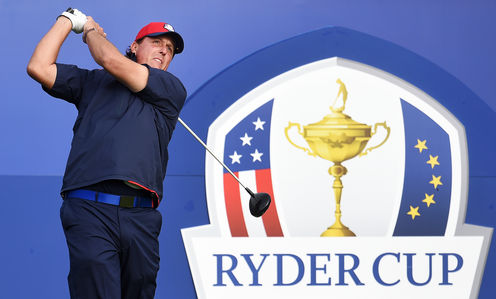 Medinah Country Club, Chicago, Ryder Cup 2012. There were six short feet between Martin Kaymer and the 18th hole. This was the moment. No other player, no spectator, none of the many millions watching on television would have dared breathe. The seconds stretched as the German composed himself for his final shot.

For those who don’t know golf, the Ryder Cup is Europe versus America. It takes place every two years, alternating between continents. There had been some blockbusters down the years, like the 1991 “War on the Shore”, where the Americans regained the trophy. It started with an address from President George Bush and ended with players from both sides in joy and despair. There was the 1999 “Battle for Brooklyn,” where the European captain Mark James described the partisan US crowd as a “bear pit”. There was the drama of Celtic Manor in 2010, where 35,000 spectators turned up to watch the first ever occasion the cup has been forced into a fourth day.

At Medinah 2012 the Americans had a 10-6 lead going into the final day with 12 points left to play. On home soil with the hours draining away, there was only supposed to be one winner. But during that last day the Europeans played out of their skins, hauling themselves back to 13.5-13.5 by the final round. It was an astonishing achievement, but Kaymer needed no one to tell him that it all comes down to the putting green in the end. When Sam Torrance holed a 22-foot putt at the 18th against Andy North in 1985, there was no way back for the Americans. In the tied match of 1969 Jack Nicklaus, the greatest golfer there has ever been, famously conceded a final hole putt to allow Tony Jacklin to square the match. With everything riding on Kaymer’s last six feet, this was one Ryder Cup memory he could have done without. He sent the ball perfectly into the hole, of course, to jubilation and disbelief from the crowd. The legend of the “Miracle of Medinah” was confirmed.

“I never had a doubt in my mind that I would miss the putt,“ Kaymer has since said.

“It’s one of those things that you don’t have a choice of missing. It’s not an option. So it doesn’t even cross your mind that you might miss it. So for me, everything was clear."

The unique toughness of the Ryder Cup

Pro golf is already one of the most mentally challenging sports. The prize money, the viewing figures, the loneliness on the putting green as the TV cameras zoom in for the close up – none of this is for those with self-doubt. The Ryder Cup beats them all, though.

It’s a different type of challenge. Both teams are composed of the nine most consistent stroke-play golfers on the respective continents, plus three wildcards. But the Ryder Cup is match play, meaning that the winning team is the one that has won the most holes. Stroke-play skills are still important, particularly on the last day, but this distinction instantly puts the best golfers in unusual territory. The golfers are also playing for something other than themselves. They have to switch their mindset from playing as individuals to playing as a team – and four of the five rounds are played as a pair, teams within teams. When teams work well, the whole is greater than the sum of the parts. And instead of the usual big cash prizes, the prize is preserving their esteem against their fellow players.

Because it only happens once every two years, if you get it wrong you are going to be remembered among your peers as the one who duffed the vital shot. And unlike failing to make the cut in a regular major, you cannot go home recover in the same way. You have to pick yourself up and try to do better the next day. The scars can be deeper.

During the practice days at Gleneagles for this year’s tournament, many of the players were focusing heavily on putting. The team that putts the best will win, not least because putting is the skill which is most vulnerable to players losing their nerve, known as “choking” in the trade. From a sports psychology point of view, helping golfers to recreate the sense of all-or-nothing pressure is vitally important. One technique I use is to wait until the end of a training session, until the player is tired and wants to go home, then ask them to sink 20 consecutive putts. If they miss one, they have to start from the beginning again. After a few blunders, it’s one way of simulating the pressure in a big tournament.

Putting is one of those skills where the more you think about it, the less likely you are to do it well. You need to get into autopilot. That’s what Kaymer was referring to in his pressure shot. It’s important to have an external focus on the ball, the club, even the blades of grass by the tee. That’s better than thinking about the position of your arms, your feet or something else internal.

Psychologists for the Ryder Cup would also want to work on team play. International football managers strive to recreate club team spirit, but you can’t do that in golf. But you’ve got to succeed in getting a team mentality together all the same. European captain Paul McGinley’s decision to bring in ex-Manchester United manager Alex Ferguson to give the players a talk was about helping to foster a European identity for the team.

So who will win at Gleneagles? Predicting this is extremely difficult, but here are a few observations about the psychological pressure points among the individuals involved. Most obvious is the wildcard players. McGinley has picked Ian Poulter as one of his, a player who missed three cuts in his final six tournaments ahead of the decision day. McGinley is backing his instinct that Poulter will be transformed into the player who won all four of his matches in 2012, again as a wildcard. Scotland’s Stephen Gallacher is the only wildcard rookie on either side. Without him there was the prospect of the Ryder Cup being played in Scotland without any Scottish players. He was picked ahead of Luke Donald, the English player who topped the world rankings early in 2012. In Gallacher’s final tournament before the Ryder Cup, he missed the cut, citing the distraction of the upcoming date at Gleneagles. These facts will not have gone unnoticed in the US camp.

As for America, several of the players suffered significant lapses in performance under the pressure of the final day at Medinah. Webb Simpson was steamrollered by Poulter, Simpson driving into a bunker on the 16th, and he was not alone. Even the ultra-reliable Phil Mickelson, a man who has several times putted for majors, lost his composure on the final hole and failed to find the green.

Another question mark is Rory McIlroy and Graeme McDowell. World number one McIlroy is suing his former management company, in which his fellow Northern Irishman is a shareholder. The Europeans are insisting there is no animosity there. If not, part of the challenge will be for the two men to subordinate their feelings to the importance of the team. Will home advantage matter? Much was written about it in the recent Glasgow Commonwealth Games, but there is also home disadvantage. Ryder Cup crowds tend to be very noisy and partisan, even in the game’s spiritual home. This is a distraction which players can and should expect and prepare for. I predict it having no effect.

The search for a talisman

Finally a word on cultural architects -– a term first coined by sport psychologist Willi Railo. These are appointed or emergent leaders whose influence is so profound that they create the emotional and motivational climate within a team. Who are the cultural architects in the respective teams? Often these are not the best players – Tiger Woods has never performed to his potential in the Ryder Cup, for instance, but has arguably played this role in the past.

The cultural architect has tended to emerge with a powerful back story, like that of Darren Clarke in 2006, who inspired his team by winning all his games only weeks after his wife had died of cancer; or Sergio Garcia in 2012, chasing the unfulfilled promise that originally came to global attention at the same course 13 years earlier. We sports psychologists will be watching closely to see whether anyone emerges in this kind of role. Very likely it will point to which team lifts the cup after the final round.

Tony Westbury, Lecturer in Sport Psychology at Edinburgh Napier University, does not work for, consult to, own shares in or receive funding from any company or organization that would benefit from this article, and has no relevant affiliations.