More women than men suffer from chronic pain, described as pain that persists for more than six months. In addition, much of this pain remains undiagnosed or untreated.

As well as the pain associated with menstruation or the bearing of children, waiting rooms of pain physicians, rheumatologists and gastroenterologists show clear majorities of women.

Research has found the only pain conditions more common in men are the relatively infrequent cluster headaches (where strong pain occurs on one side of the head), nerve pain after shingles, ankylosing spondylitis (a form of spinal arthritis) and migraine without perceptual disturbances of light and smell (called “aura”).

Male subjects' written responses were shorter and less detailed, with potential influences being gender role expectations of pain response, a male reticence to report painful sensations and feelings of embarrassment when reporting a pain experience.

History of thinking about pain

We understand pain in others best when we have real or imagined shared experience. Pain in women is frequently both unable to be visualised (unlike lacerations or other visible injuries) and outside the experience of their health professional.

How to view the female patient with pain that can’t be seen is a problem the Ancient Greeks pondered as early as 400 BC. Faced with a complex range of suffering and complaints in women, Ancient Greek physicians came up with a novel explanation: the “wandering womb”. The womb was believed to move upward in a woman’s body whenever it became hot and dry, searching for cool moist places, and causing stress and damage to her physical and mental well-being.

Hippocrates (460-370 BC) used the term “hysteria”, which derives from the Greek word “hysteros” for “womb”, to describe a wide variety of female emotional and physical conditions. By inference this labelled women in pain as weak, inferior or irrational. Parallel to their inferior social position in Ancient Greece, Aristotle (384-322) used the concept of hysteria in his book, The Nicomachean Ethics, as proof that women were unsuitable for public office. 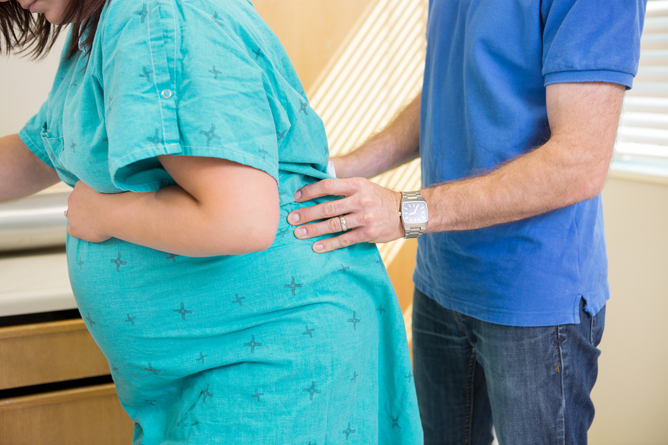 There’s a common belief that women have a higher pain threshold so they can give birth, but actually men’s pain threshold is higher. from shutterstock

While such beliefs seem far-fetched today, the diagnosis of “hysteria” continued to be commonly used in European medical practice to describe a wide variety of symptoms in women for the next 2,000 years. Only in 1980 was it removed from the DSM III Manual of Psychiatric Disorders.

Unlike women, historical accounts of men’s pain have been influenced by their ability to withstand injuries incurred in warfare. As English poet William Cowper (1792) noted, incitements including “renown and glory” helped men disregard pain on the battlefield.

In 1977, with concern about the risk that new drugs might have on an undiagnosed pregnancy, the US Food and Drug Administration recommended that all women who were capable of becoming pregnant be excluded from drug trials. The presumption was that pain research in men would be applicable to both genders. While well intentioned, the consequence of this decision has been that the majority of pain research has been undertaken in male humans or male rodents.

This decision has since been reversed, and research into pain differences between the sexes has dramatically increased. While results have at times been conflicting, what we are learning is that females consistently show lower pain thresholds and increased pain following a painful stimulus than males. This doesn’t mean women are weaker than men or their pain isn’t real, but they feel pain more intensely than men.

Pains specifically associated with women, such as menstrual pain, may predispose women to feeling pain more acutely in other areas. Women’s brains produce less endorphin (which inhibits pain) following a pain stimulus than men. Yet when morphine is given to treat pain, it generally works equally well in either gender.

Clearly there is still a lot to learn about gender and pain. Newer thinking suggests that pain in men and women may even occur through entirely different mechanisms and pain pathways.

For example, microglia are cells from the immune system involved in chronic pain. Research in mice has shown that drugs that prevent activation of microglia are effective in reducing pain in male, but not female, mice.

Every one of our cells knows whether we are male or female and responds accordingly. That there are differences between male and female pain should not be surprising.