In a different blog, Henry Brown made the following statement:

As mentioned previously, a scalar gravity theory will not do what you want.  In particular, frame dragging effects rule out any scalar source theory.  So we can discuss the 'big-picture' view on that more if you want.  (And before plunging into yet another proposal it would be good to learn more about these big-picture issues.)

This blog will discuss this very issue.

Back in 1918, Josef Lense and Hans Thirring published a paper in German on how the rotation of a central mass would make an effect on the metric of space-time.  I was able to find a translation written in English on the internet.

They use a perturbation theory approach.  I am having trouble lining up their calculation to the one on wikipedia. The "more modern" approach uses either gravitomagnetism or the Kerr metric, an exact solution for a rotating central mass which was developed decades later in 1963.

The best experimental support for frame dragging effects comes from an experiment first discussed in 1959, known as Gravity Probe B.  Stanford and NASA worked together to try and devise an absurdly precise set of four gyroscopes.  The frame dragging effect was calculated to be on the order of parts per trillion, so a refined effort was required.  The experiment ran for 1.5 years in space, then 5 years on the ground for data analysis.  The frame-dragging effect was -37.2±7.2 mas/yr.  That represented a 19% error, more than the design goal, but still useful.  The prediction of general relativity is -39.2 mas/yr.  This looks great for GR.

Clearly the researcher's recognized the challenge the experiment faced.  If they had only used one gyroscope, the answer would have been ambiguous: 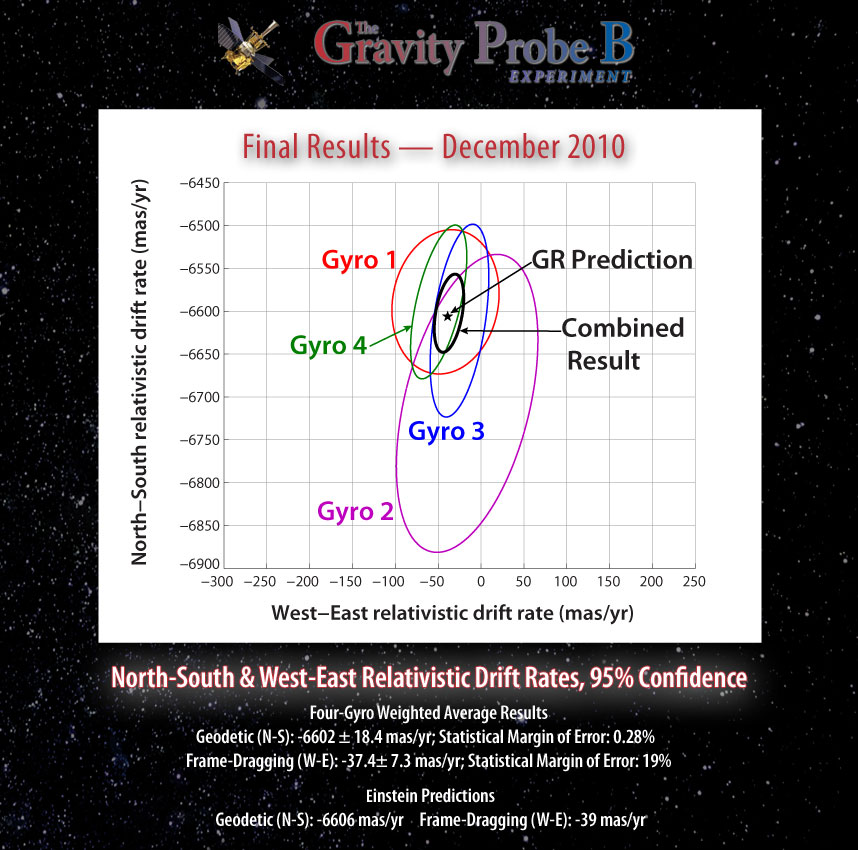 It is good to see that three out of four had a negative value within one standard deviation. "Yes, Virginia, there is a [frame dragging effect]."  The data would have been even more impressive without Gyro 2, but that is the way science is done: one must use all the data collected.

Why have I yet to mention the other measured value, the geodetic effect which is more that 150x larger?  That arises from a point source that is rotating.  I believe there will be the same prediction for both Newtonian gravity and GR.

What does Newtonian theory predict about frame dragging?  Well, the angular momentum does not get counted as a mass. Newtonian theory is not a metric theory although one can write a cheap imitation of one as has been discussed in other blogs. This does not mean that Newtonian theory predicts zero effects.  In GR, there is no gyroscope equation because the predicted changes are all about the change in the metric.  Newtonian theory would behave like a gyroscope, and that could have an effect.  I don't have the technical skill to judge this paper which is on the pre-print server only, not in a peer-reviewed journal.  If you want to see someone's effort to quantify the effect, read: "Newtonian Gravity Predictions For Gravity Probe B", Stanley L. Robertson, Feb. 25, 2005. He claims the Newtonian prediction is in the same direction, but only a quarter of the GR prediction.  There is another guy on the internet (and he gets labeled as a "guy on the internet" because his efforts are not on the pre-print server) who claims there is no measurable difference between the predictions of GR and that for Newtonian gravity gyroscopes. To his credit, the guy - James Constant - did have the reference to the pre-print paper.  Again I don't have the chops to know if Constant's calculations are correct or not.  I am just doing my thing as a blogger to point out references for those who have the skills to read deeper.

Being in the ultra-orthodox fringe, I accept that general relativity has passed this tricky test at the level measured. I suspect this is the "simplest" way angular momentum can have a material effect on a metric because that is the pattern for general relativity.

More than that, gravitomagnetism is a useful framework to do calculations that cannot be done with the full general relativity theory.  After all, it took almost fifty years to come up with the Kerr metric. General relativity is not user friendly.  On the other hand, because gravitomagnetism is so similar to electromagnetism, analogous phenomena can be looked for and calculations done in a straightforward way.

A valid framework is one containing no flaws.  Is gravitomagnetism valid?  What one does first is to work in the weak gravity regime where gravity can be approximated as linear.  This regime covers almost every square inch of the Universe except near black holes.  Within the framework of a well-stated approximation, a framework can still be valid.

The linear form of general relativity is a second rank field theory.  To arrive at gravitomagnetism, the rank of the field equations changes to be rank 1.  The change in rank has significant consequences. A rank 1 gravity field theory has 2 signs for the charge of mass. One way to recognize this is that the second field strength tensor is anti-symmetric. Change the order of the indexes and the field strength tensor flips signs: what was once attractive now repels.

Gravitomagnetism is a vector theory. For any vector theory one can construct, like charges repel. I have read several technical papers where they assume this is so obvious to readers that they don't provide details. Here is all Walter Thirring has to say ("An alternative approach to the theory of gravitation", Ann. Phys., p. 96, 1961) after writing Lagrangians for scalar, vector, and rank 2 tenors:

Furthermore one finds that the static interaction between particles is attractive in the scalar and tensor case and repulsive in the vector case. The latter is obvious since a positive energy requires m > 0 and equal charges repel each other electrically. Since early experience teaches us that gravity is attractive we are left with the two possible candidates [scalar and tensor theories].

Note that you will not find this flaw mentioned on Wikipedia. Only the most persistent editor wins there, not the wisest. I emailed a professor who had written a review article on the subject to confirm my own analysis, which he did. He is a big fan of how useful gravitomagnetism happens to be, but the framework has flaws that can be managed.

The frame dragging result does not mean that a proposal must have a gravitomagnetic field of the form:

General relativity does not have such a field because general relativity is a second rank field theory. The frame dragging result is not about the field equations anyway: it is about changes in a metric and how those changes affect the geodesic (roughly the force-free path through space-time). It is still amazing that despite those technical issues, general relativity the second rank theory is basically saying there is a gravitomagnetic field that is the curl of four potential.

The force equation for a scalar gravity proposal

Say someone is investigating a gravity theory with a force law that looks like this:

Because the curl of the gradient of a scalar function is equal to zero.  That does not mean one can in a cavalier way assume that a system that spins versus one that spins not at all will look identical.  I don't know if the pre-print paper is correct (¼ of GR) or the web claim (both are the same).  I do know from experience that it is bad to quickly assume that two systems that are physically distinct (one a gyroscope, the other not) will be no different in a gravity field.  I am skeptical of the calculation done by James Constant if for no other reason than light bending is twice as big in GR as in Newtonian theory.

There turns out to be more than one reason to "know it won't work." Thirring did go over a number of desirable properties to be found in a scalar theory, including a claim that "The gauge group does admit nonlinear transformations of z and hence the equivalence principle does hold generally." (p. 91 if you are interested in more detail). This is the clearest problem with such an approach:

Thus one can say that a scalar theory is perfectly consistent and there is no theoretical prejudice against it but it has to be rejected on empirical grounds (mainly because of (7) [no coupling to the electromagnetic field]).

Light cannot bend because the mass of a photon is zero which contradicts numerous observations. A force of this form has a number of properties.  One is that it is conservative as far as energy is concerned.  Therefore it cannot match the energy loss measured in binary pulsars.  The energy required to go from one point to another is independent of the path taken.  That is not the case in GR, where the geodesic will be easy to follow, but any other path will require the input of energy. There are plenty of reasons to dismiss a proposal of the form above out of hand.

In my own collection of failed efforts to develop a new approach for gravity, I have always looked for a method that will change the measure of time measurements in the opposite way as changes in spatial measurements that depends on the distance from a mass source. Such a construction would have light bending, but not necessarily the right amount. I suspect but cannot prove that such a proposal would also have frame dragging, again, not necessarily the right amount.

I reserve the right to delete comments and will do so after leaving my own (temporary) comment as to why. Please stick to the topic at hand, the flaws of scalar gravitation.  If you have a great solution to a problem, congrats, blog about it on this website, just not in this particular blog.

Keep the discussion polite and technical. The golden rule will be followed.