Gareth Fabbro
In this post, I want to set off on a voyage, a voyage to visit some of the less well-known volcanoes of the world.  I'll take a look as some volcanoes you may not of heard of, and it will also be a bit of a learning experience for me as I read a bit more about these places.  These sort of things usually need a gimmick, so I thought I'd go with an old-fashioned a-to-z.  As is customary, I start with an A: Aniakchak. 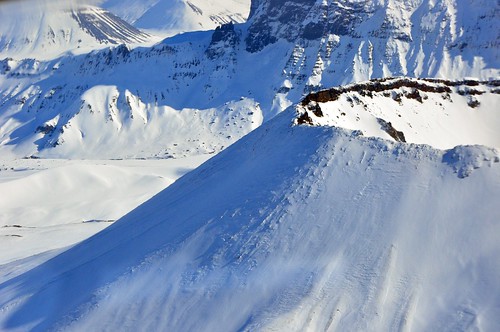 Vent Mountain, the largest cone inside the caldera of Aniakchak.  Photo CC BY-NC-SA by Buzz Hoffman.
Aniakchak is located in Alaska, and is part of the Pacific 'ring of fire'.  It is a subduction volcano, and the Pacific plate is being subducted below Alaska.

View An A to Z of Volcanoes in a larger map
It has been active for at least 450,000 years, erupting basaltic andesite to dacite.  The only historically recorded eruption was in 1931.  Much of its current appearance dates from around 1645 B.C.E, when it had a large, caldera forming eruption.  Ash from this eruption is found in ice cores drilled from Greenland, which is how the date of the eruption is know so well (to within ± 4 years).  However, for a while the ash was thought to come from Santorini, where the Minoan eruption occurred at about the same time. 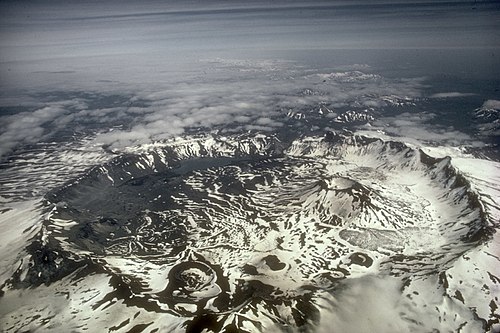 Aerial view of Aniakchak caldera.  Photo credit: M. Williams, National Park Service, via Wikimedia Commons.
One of the consequences of the 1645 B.C.E. eruption was a large lake built up inside the newly-formed caldera.  Today there is still a lake, the wonderfully named Surprise Lake, which drains through a gap in the caldera known as 'The Gates'.  This is the 'V'-shaped gap that can be seen in the photo above on the far side of the caldera.  However, in the past the lake was much larger.  There are lake sediments up to 0.5 m thick over much of the caldera floor, and wave-cut marks around the caldera walls allow reconstruction of the original size.  The lake covered half the caldera, about 38 km2, to an average depth of 98 m.  This gives almost 4 km3 of water in the lake. 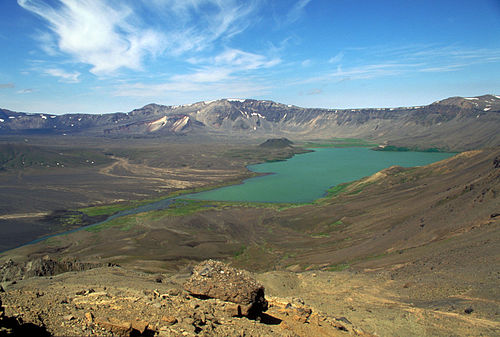 Surprise Lake, Aniakchak caldera.  Photo Credit: Game McGimsey, Alaska Volcano Observatory / U.S. Geological Survey, via Wikimedia Commons.
Downstream of the gates is evidence of a large flood.  There are large boulders, some over 30 m long, which could not have been moved by the present Aniakchak river.  There are also deeply eroded valleys and other erosional features, that require large flows to have formed.  The suggestion is that the water in the caldera was released in one large event, when the caldera wall was breached.  The authors of that study pointed to other calderas with 'V'-shaped notches in their walls, which were likely formed in the same way, as evidence that the flood at Aniakchak is not an unique event.   Lake filled calderas elsewhere in the world pose a similar risk of future floods.