Anyone who woke up yesterday morning hoping that December 2nd 2010 might be a historic day in the search for extraterrestrial life is likely to be sorely disappointed. All week the hype has been building since the NASA PR machine announced that they were about to release an astrobiology finding that would "impact the search for evidence of extraterrestrial life." Speculation got a little bit crazy to say the least! But I'm not going to talk about that, nor am I going to discuss the science behind the actual NASA findings, since this has already been covered by some truly excellent blog posts by Ed Yong, PZ Myers and Ivan Oransky, to name but a few. Suffice it to say that we all know the link to extraterrestrial life was tenuous at best!

As many people have pointed out, the findings presented by the team in Science are very interesting (as you'd typically expect from an article in Science). In spite of this, all morning Twitter was alive with incredulous tweets about embargoes, over hyped press releases and feelings of disappointment. The anticlimactic feeling is not particularly surprising since, as Ed Yong points out, people have effectively "been robbed of an opportunity to be excited about a genuinely interesting discovery." To me this highlights some of the key issues with effective science communication and this is what I wanted to talk about.

NASA and Science: these are two formidable giants of science that alone will make people, with or without a science background, sit up and listen. They really missed a key opportunity to engage members of the public with the kinds of research that they are doing, to show us what our tax dollars are paying for. As one commenter pointed out on hearing the news of the actual discovery, what instead will likely happen is that people will simply see the hyped-up rumour mongering as a transparent attempt to drum up publicity. The fact that the press conference, for many, did not live up to the speculation, simply gives a sense that scientists over-exaggerate their findings.

We commonly find that the media and PR machines of big organizations take one abstract sentence from the conclusions of a scientific publication in order to make a statement about the potential impact or implications of a piece of research. In this case that was how it might relate to extraterrestrial life, which turned out to be the spark for a speculative frenzy. This isn't necessarily the fault of the authors of the press release, although some have suggested that this might in fact have been their intention, possibly to gain support for funding of projects like the Mars Rover, but it's a big failing in communication of the real science and in engagement of the non-scientific public. The problem with this strategy is that it generates a culture of mistrust. When the hand is overplayed, whether intentional or not, people tend to feel that they have been misled. If things then don't pan out the way it has been predicted or subsequent research puts the findings in a completely different light, or, as in this case, expectations are raised and not met, then it is difficult for the public to know what to believe and to trust. Whilst scientists are likely to easily forgive and look past the charade to the thrill of the real discovery, people without a science background might not be so generous.

The crux of the problem is that there is a lack of understanding of the incremental nature of science. Rarely are truly mind-blowing and fundamental advances of knowledge made with just one piece of research. Often the real impact of an important finding isn't fully understood until further down the line or scientists hold fast to a theory that fits with our current knowledge, but is later proven to be mistaken. The way that science is communicated often feeds into the myth that scientists are infallible, when really we're all just human and, as the idiom goes, to err is human. The fallibility of even the greatest scientists and the longest held theories is outlined in some excellent articles.

We shouldn't have to rely on science bloggers to cut through the hyperbole to get to the real story. However, if ever there was an exemplary response to Royce Murray's piece in Analytical Chemistry about whether bloggers should be of serious concern to scientists, it's this! The majority of bloggers should be applauded, since they are effectively doing the job that the media should be doing and bringing the real science to those outside the lab. Why can't we engage the public with the interesting side of the real findings, instead of throwing meaningless statements of impact at them?

Dr Kiki Sanford tweeted on the topic of the NASA press conference, "I'm surprised that people are disappointed in the NASA arsenate microbe news. I think verification of speculation is science at its best." I'm not so surprised myself that people are disappointed, but I do agree that it was a beautiful piece of research in itself…now let's scrap the hype and show people science at its best! 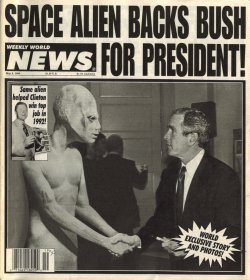 The Wandering/Wondering Scientist
More Articles All Articles
About