Mostly the Huorns stood as dark trees in the deepest forests, gnarled and unmoving, yet watchful. When aroused in wrath they moved swiftly as if wrapped in shadows, falling on foes with deadly and merciless strength. . . . These were wild wood spirits who were bent on the destruction of all who threatened the forests. They were dangerous to all on two legs unless they were protected by Ents.

So what is this, growing outside the Archaeology Department of the University of Reading, England? 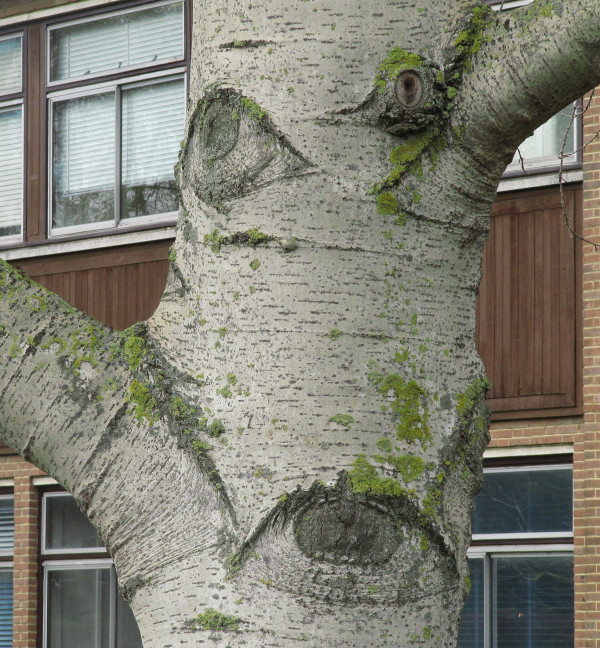 It is, in fact, a type of Poplar from North America, namely Populus tremuloides, ranging from next to the Arctic Sea in the Canadian Northwest Territories, most abundant in the colder parts of the continent but with isolated pockets as far south as Mexico.

However, as the Wikipedia link above tells us:

It propagates itself primarily through root sprouts, and extensive clonal colonies are common. Each colony is its own clone, and all trees in the clone have identical characteristics and share a single root structure. A clone may turn color earlier or later in the fall than its neighbouring aspen clones. Fall colors are usually bright tones of yellow; in some areas, red blushes may be occasionally seen. As all trees in a given clonal colony are considered part of the same organism, one clonal colony, named Pando, is considered the heaviest and oldest living organism at six million kilograms and approximately 80,000 years old. Aspens do produce seeds, but seldom grow from them. Pollination is inhibited by the fact that aspens are either male or female, and large stands are usually all clones of the same sex. Even if pollinated, the small seeds (three million per pound = 150 micrograms) are only viable a short time as they lack a stored food source or a protective coating.

I suspect that such ‘behaviour’ may have evolved in response to the recent ice ages.  Bitter cold is no help to sexual reproduction in plants.  This is obvious in the case of insect-pollinated plants, so that some flowers in Greenland with its shortage of insects have gone in for self-fertilization.  Poplars, though, are wind pollinated, so it may be that the difficulty of producing seeds and the rigours of seedling development have given the clonal method of propagation the edge.

I am not the only person to appreciate this wonderful tree, as the online article Aspen Eyes demonstrates.  But the clonal method does have its vulnerabilities, as the Dieback section of the Wikipedia article describes.  Perhaps a breeding programme to select for the ‘sexiest’ trees would be in order.

But I still wonder about that specimen at Reading University.  It does look as if it might be one of a new breed of invigilators, to avoid tying up staff time during the exam season.  Or maybe, are the NSA using biotechnology to develop new spying methods for use in Europe?

Which leads me to an even more outlandish or out-time-ish thought.  At the Battle of the Hornburg, the Huorns only attacked when all the enemy orcs were in their midst which denied them the chance of escape.  Since the Huorns waited no orcs would have been able to see the carnage from outside and escape.

Traditionally, in Europe, pitched battles have taken place in the open field.  But in the USA, there is one very famous exception, namely the Battle of the Wilderness.

What if mutant huorn-like aspens had been established there? A most horrifying thought, but one that might be taken up by historical sci-fi television producers.