Robert H Olley
For about a day I had been trying to read Real Clear Science, particularly the article linked Evolution Debate: Blame Atheists.  Alas, every time I visited the site I got a message:

This site is temporarily down and we are working on restoring service. Sorry for the inconvenience.

It’s now back up, but in the interim I have taken the opportunity, since I run on OScar from Sesame Street Systems, to have a Grouch.  Fear not, North Americans, it is directed at my fellow Brits.

I enjoy very much watching television series on history, especially where science and technology feature prominently.  But often there is a Fly in the Ointment.  The likely source (says Wikipedia, in my opinion almost certainly the source) of this expression is in the King James Bible:

Dead flies cause the ointment of the apothecary to send forth a stinking savour: so doth a little folly him that is in reputation for wisdom and honour. (Ecclesiastes 10:1)

The ointment is question here is The Story of Maths , presented by Marcus du Sautoy, he who succeeded Dere Ol’ Dawkins in the Simonyi Professorship for the Public Understanding of Science.  I have just been watching a repeat of this excellent series, first presented in 2008 on BBC Television, and by and large most excellent it is.

In my last four years at Reading University, I taught part of a History of Maths course, and it is a subject over which I can wax rapturous.  Not surprisingly, 99% of the TV series was a rich fruitcake of information.  One of the many delights was meeting descendants of Leonhard Euler and of the Bernoulli family which produced eight significant mathematicians in the 17th and 18th centuries.  Both of these were still in academia, though not as mathematicians!

The episode in particular was that featuring the philosopher René Descartes, who did so much for algebraic geometry.  It told of how he  used to lie in bed until 11 in the morning.  We saw the French (good for them) honouring this great thinker in a popular festival.  Alas, the constraints of the one-hour episode format (or rather less than one hour, with all the woo-woo wah-wah that the producers like to add), left out what would have been the closing bracket to his portrait, namely that he met his nemesis [1] in the person of Queen Christina of Sweden, who in 1649 persuaded him to go to Stockholm. However the Queen wanted to draw tangents at 5 a.m. and Descartes broke the habit of his lifetime of rising late. After only a few months in the cold northern climate, walking to the palace for 5 o’clock every morning, he died of pneumonia.

Among the historic figures presented were Qin Jiushao (1202 –1261), a brilliant but far from likeable Chinese general, and Julia Robinson (1919 – 1985), who overcame many obstacles to reach the premier league of 20th century mathematicians.

So what is the fly that stinks?  Although not so nearly strident as his predecessor, he could not resist the temptation to insert words to the effect:

“In those days, people liked to prove everything starting from axioms, such as one plus one equals two, or God exists.  I know which I’d go along with.”

Now to one such as myself, to whom the question of the existence of God is of prime importance, that comes like a punch between the eyes.  Now I do not think they are equivalent types of questions, and conflations such as the following

in which the properties of the rectangular hyperbola appear in a book entitled The Principles of Religion (hat tip to Eli Maor for that one!) do seem to me to be trying to make a dish out of chalk and cheese.

However, how to react?  For one moment, the learned professor seemed to be back in his days as a sixth-former.  I imagine him as a youth coming out with this in class, and receiving detention.  And I know what I would have set him – to copy out the first 362 pages of Principia Mathematica, which is what it took Whitehead and Russell to prove that, when arithmetical addition has been defined, 1 + 1 = 2. [2] 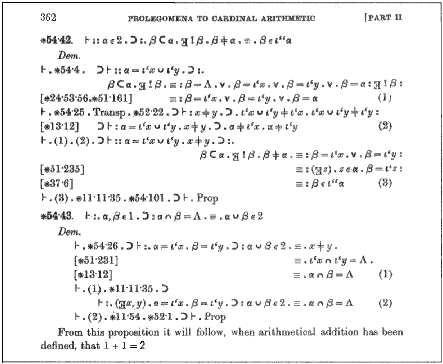 But perhaps one should not be too hard on the professor.  After all, the BBC seems to regard itself as some kind of über-God, the arbiter of What is Right and Wrong, and they do seem to like that sort of thing.

[1] Nemesis is supposed to follow hubris.  Descartes certainly was a most conceited fellow.

[2] That was in the first volume.  The proof is actually completed in Volume II, 1st edition, page 86, accompanied by the comment, “The above proposition is occasionally useful.”