Oliver Knevitt
Everyone's heard of the Darwin Awards, right? It's where some poor soul dies in such a monumentally stupid way that it can be considered that they have done the human gene pool a great favour by inadvertantly altruistically killing themselves and removing their genes. Well, I have a candidate from the fossil record; a late famennian placoderm, that definitely deserves such an accolade.

Firstly though, a quick primer on placoderms. In short, they were big armoured predatory fishes that were widespread in the Devonian. But, by big, I mean really big. Some of these dudes were as big as a double decker bus and would have pretty happily chomped through a car like it was a ham sandwich.

I love this reconstruction!

Which makes our guy's plight all the more hilarious. Placoderms eat all sorts of things and have even been found to (apparently successfully) swallow things up to half their own body size, but our candidate seems to have bitten off more than he could chew (the pun was very much intentional, by the way!).

For his tea, our placoderm eyed up a very tasty looking ctenacanth shark of over 6 foot in length. Now, considering that our hero was only barely 10 feet himself, he had set his sights high. But, rather than sensibly moving on and finding some more suitably sized prey, we can only assume that our placoderm was very hungry indeed, for his greed got the better of him and he attempted to have a feast of a dinner on the shark.

Our hero closed on the shark, opened his fearsome jaws wide, and clamped them shut round the middle two thirds of the shark's body - no easy task considering the size of the prey. 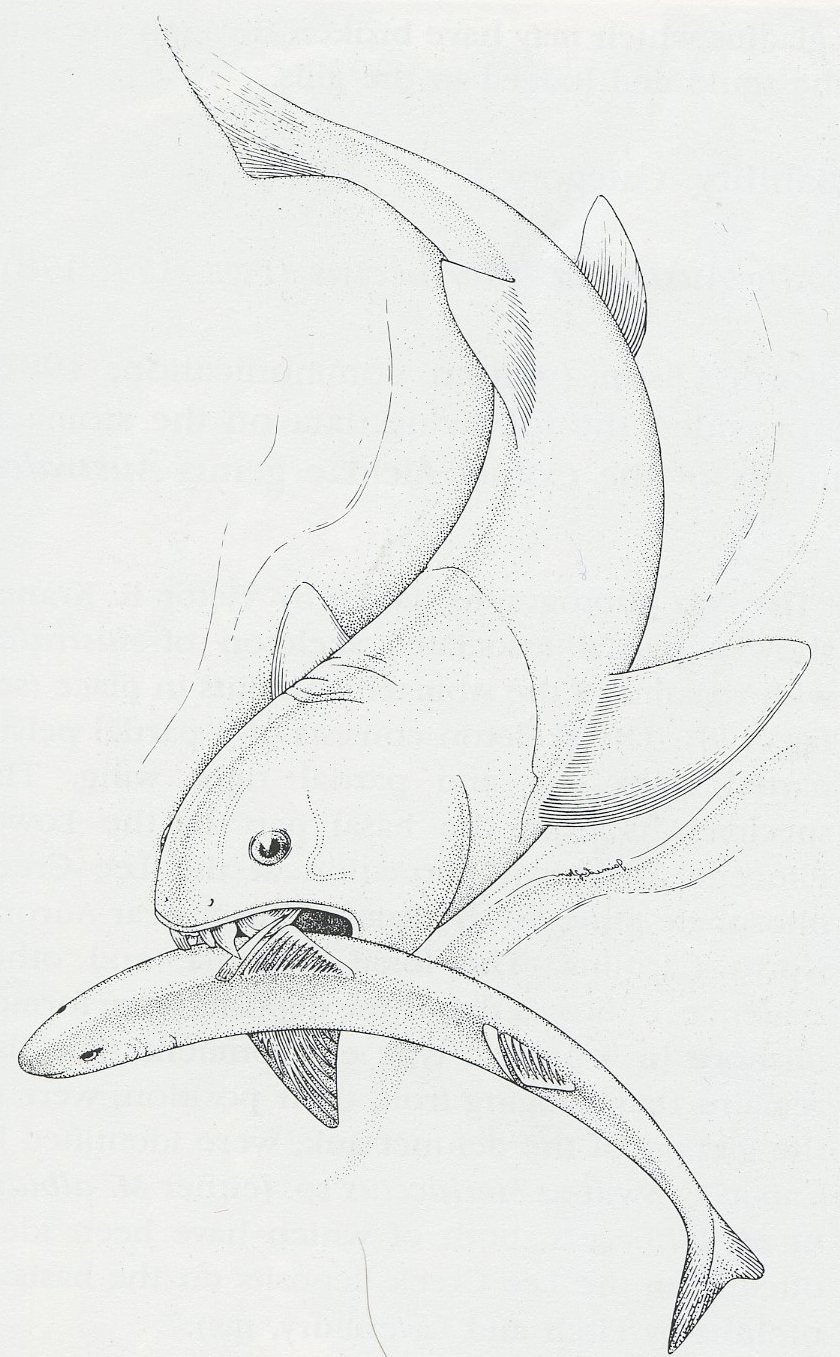 But, alas, clearly the placoderm did not realise that ctenacanths have a nasty surprise. Within their dorsal fin, they have a formidable tough mineralized spine. As our hero snapped his hefty jaws shut, his prey's spine pierced through his upper palate, was driven straight through his braincase wall, and impaled him through his brain, killing him instantly. 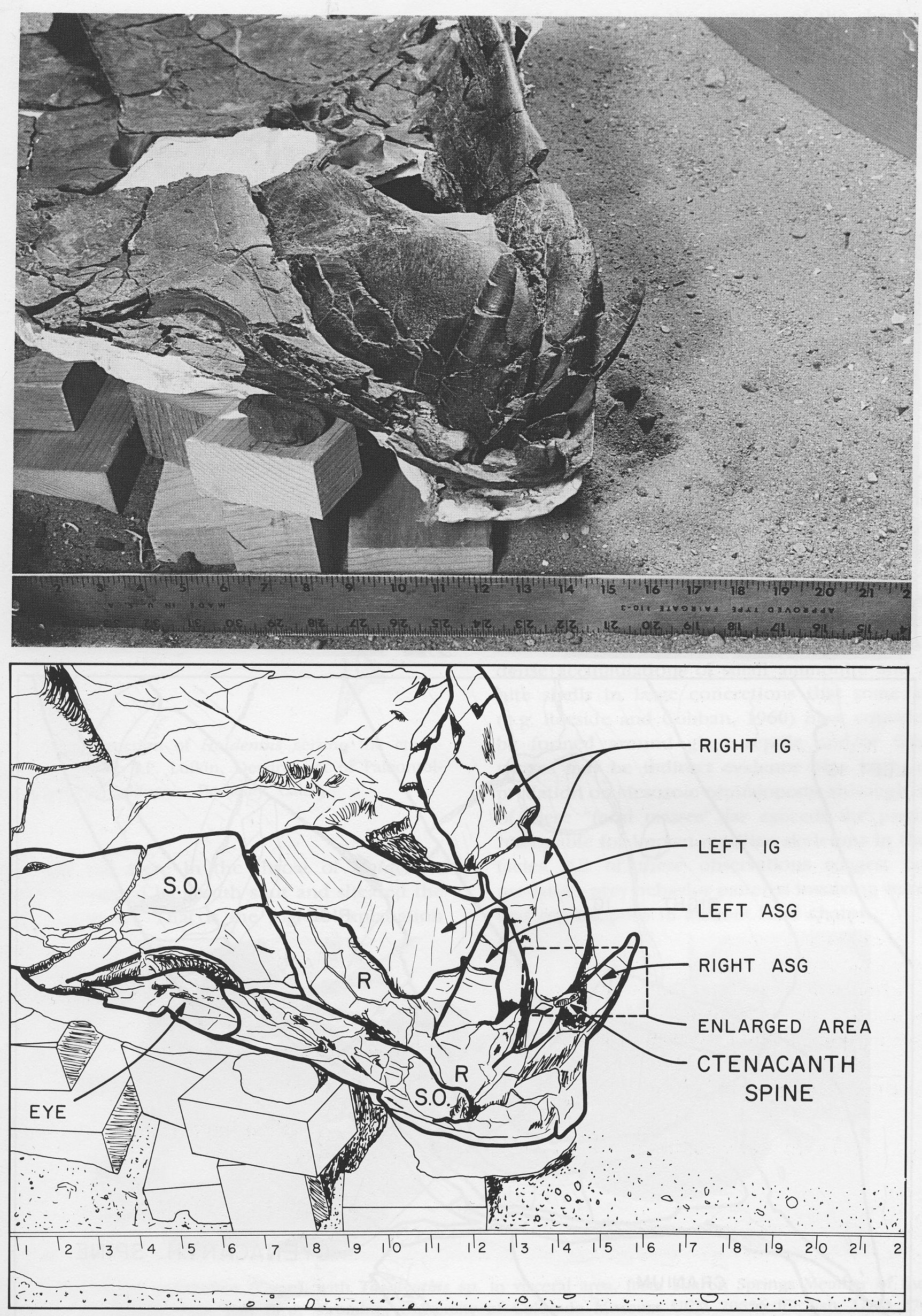 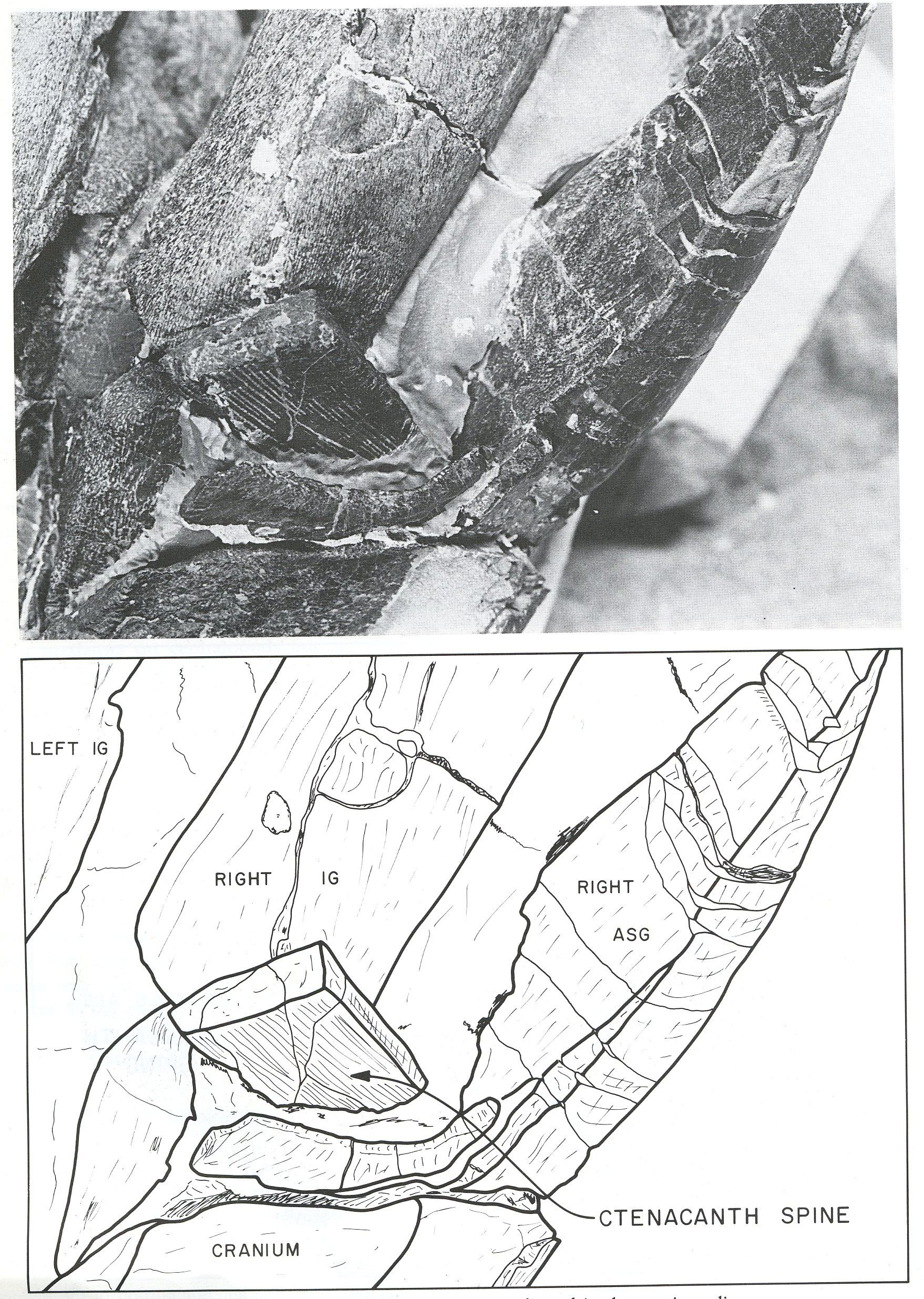 In the fossil, the spine is still lodged in the braincase; you can see it more clearly in the lower, zoomed-in picture.

So, this stem-jawed fish clearly altruistically removed himself from the gene pool for the greater good of pushing the evolution of placoderms to more prey-wary forms - for which he should be nominated for a Darwin Award.

To add insult to injury, unlike most Darwin award recipients, our hero's silly blunder has been recorded for properity through luckily undergoing rapid fossilization (thanks in part to his rapid death) and is now showcased in a museum.

I should say though, a fat lot of good it did, though, his removing himself from the placoderm gene pool. All placoderms went extinct less than 20 million years later in the end-Devonian extinction. This makes it all the more ironic, I would say, and makes him even more deserving of the prize.

------
Citation: M. C. Hansen and R. H. Mapes, “A Predator–Prey Relationship between Sharks and Cephalopods in the Late Paleozoic,” in Evolutionary Paleobiology of Behavior and Coevolution , Ed. by A.J. Boucot (Elsevier, London, 1990), pp. 189–199.

I've also had an enquiry about where this fantastic fossil is found; according to the source above, it is specimen CMNH 8130, housed at the Cleveland Museum of Natural History. The specimen is of a late Devonian arthrodire placoderm called Holdenius holdeni, and was collected by W.J. Hlavin in 1965 from the Cleveland shale, very close to where the holotype was found.
Between Death and Data
More Articles All Articles
About