You may have read about the strange double asteroids dancing in space but putting together the pictures is a perfect example of science collaboration.

Prior to 2000, Antiope was just another asteroid. Then the 10-meter Keck II telescope in Hawaii discovered it was a doublet but not much else was known.

Two years ago, improved images from the European Southern Observatory's 8-meter Very Large Telescope (VLT) in Chile and Keck II determined an approximate orbit of the asteroids - but information was still sparse. 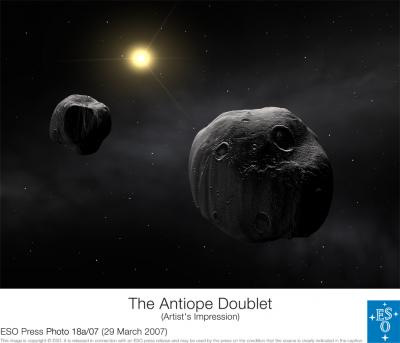 In 2005, astronomers called on observers around the world to turn their telescopes on the asteroid pair during a time when they predicted a mutual eclipse ( occultation - when one passes in front of and completely blocks light from the other ) would cause a drop in brightness.

In May, 2005 the occultation happened and astronomers from locations as diverse as Brazil, France, the Indian Ocean and California started recording everything they could. Their results will be published as part of an article in the April 2007 issue of the journal Icarus.

"This is the first publication I've had in a professional journal, and I'm really happy about it," said amateur astronomer Peter Dunckel, 75, a retired paper company executive who observes from the backyard of his vacation home in Grass Valley. "What is really a thrill is to have my little 7-inch telescope along with an 8-meter telescope on the same paper; it is unbelievable."

University of California, Berkeley astronomer Franck Marchis said, "Amateurs can be used for professional studies, compensating for the small size of their telescopes by the large numbers of observations and the frequency of observations they can do," Marchis said. "You can time the orbits more precisely when a mutual event happens, which allows you to extract also the size, shape and surface detail of each component, and also what it's made of."

So you see, size doesn't always matter as much as volume and enthusiasm. That's a pretty good mantra to live by.

It's also a terrific endorsement of the power of collaboration between professional scientists and amateurs with enthusiasm. Scientific rigor doesn't come from a title, it comes from devotion to finding answers - and you don't have to get paid for that.