There's a lot of "Can X make you gay?" articles being written these days. This fellow says soy is making you gay and even the New York Times wonders if you have a gay car.

Now a study from the University of Pittsburgh says that fish from Pittsburgh rivers contain substances that act like estrogen.

Estrogen. The female hormone. So you'll have to forgive me for the topical television reference, but when a show called Queer As Folk

is set in Pittsburgh, 'fish' is going to jump in there rather naturally. 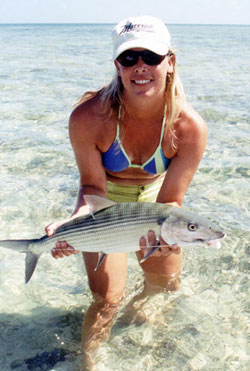 Since fish are sentinels of the environment, say researchers at Pitt's Center for Environmental Oncology, and retain chemicals from their habitat within their bodies, their experiments show that feminizing chemicals are making their way into the region's waterways.

Their study also says these chemicals caused increased growth of estrogen-sensitive breast cancer cells. Wow, you can become a woman and get breast cancer. Fishing in the 'Burgh sounds better and better.

"We decided to look at pisciverous fish, those that eat other fish, for this project because we know that they bioaccumulate contaminants from water and their prey, which may include toxic metals, farm and industrial runoff and wastes from aging municipal sewer systems," said Conrad D. Volz, Dr.P.H., M.P.H., principal investigator, department of environmental and occupational health, University of Pittsburgh Graduate School of Public Health.

"The goals of this project are to use fish as environmental sensors of chemicals in the water and the aquatic food chain, and to determine the origins of these chemical contaminants," said Dr. Volz. The study examined white bass and channel catfish caught in the Allegheny, Monongahela and Ohio Rivers. These fish are among those commonly caught as a food source by local anglers.

The laboratory of Patricia K. Eagon, Ph.D., co-principal investigator of the study, found that extracts from the fish acted like estrogen, a female hormone, by binding to estrogen receptors – the proteins within cells that render the cells sensitive to estrogen.*

"We know that there are hundreds, even thousands, of chemicals in the environment that can have estrogenic activity," said Dr. Eagon. "These chemicals usually come from industrial pollution, farm animals, farm chemicals and municipal water treatment plants. What surprised us most in this study was that these estrogenic materials are present in such easily detected levels in local fish."

According to Volz, the next step in their research is to identify the sources of the estrogenic chemicals. "These findings have significant public health implications, since we drink water from the rivers where the fish were caught. Additionally, the consumption of river-caught fish, especially by semi-subsistence anglers, may increase the risk for endocrine-mediated health endpoints like some cancers and developmental problems."

They drink from the river in Pittsburgh??

If they are doing that, they have a lot more to worry about than growing breasts.

* Note: Of six bass extracts tested for estrogenic activity, four displayed a strong or moderate ability to bind with the estrogen receptors. Of 21 catfish extracts tested, nine displayed a similar ability to bind with the estrogen receptors. The researchers also examined whether the fish extracts could result in growth of breast cancer cells cultured in the laboratory, and they found that two bass extracts produced strong-to-moderate cell growth, as did five catfish extracts.

Source: University of Pittsburgh Schools of the Health Sciences.