Patrick Lockerby
The Meaning Of Tolerance


Tolerance, the ability to 'live with' or 'put up with' something has wide-ranging applications in engineering, and is strongly parallel to the notion of error bars1 in science.

I use the terms 'tolerance' and 'addition of tolerances' in my series A Science Of Human Language  to describe minor variations in speech and writing which have no significant effect on the transmission of meaning, but which explain the drifts of word pronunciation and meaning which occur across generations of language users.

This article is intended to clarify the concept of engineering tolerance and the importance of algebraic addition of tolerances, or 'stacking'.

Tolerance, toleration, tolerable.  Unusually, these words have tended to retain their usage over the centuries since the Roman Empire.  Whether used as ordinary speech or as legal or technical terms, their meanings would still be understood by the Romans.

From the Latin:
toler-  to bear, endure, sustain, put up with;
tolerans  patient;
tolerabilis  tolerable, bearable.


The meaning of tolerance in general social use

To tolerate something is to put up with it, to be patient or forbearing about it.  The use of the term tolerance implies a negative: something undesirable.  Thus, to tolerate another person's religion implies disapproval, just as acceptance implies approval.  To one person, tolerance may mean personal freedom from bias or bigotry.  But because of the way that words are often used rather loosely, a person who claims to be tolerant of, rather than neutral or indifferent to another's beliefs, may be seen by others to be making a value judgement about those beliefs.

In law, tolerance is an allowable amount of variation from a legal requirement.  In modern law it may be in the form of permitted variations in dimensions and materials, as in the laws regarding construction and use of machines and buildings.  In the past, tolerance expressed in law was mostly about religion. Tolerance was often doled out by the spoonful, and grudgingly at that.

The Toleration Act of 1689 did not grant religious freedom.  It slightly loosened the chains that bound all subjects to the state religion.  It is a strange fact that when chains are loosened there is a sensation of comfort - expressed in the following Act of Parlaiment as  'some ease'.  That feeling is entirely illusory, and it is not long before the chains are felt again.  Tolerance is not freedom.

TOLERATION ACT, 1689
(Statutes of the Realm, VI, pp. 74-76)
AN ACT FOR EXEMPTING THEIR MAJESTIES' PROTESTANT SUBJECTS
DISSENTING FROM THE CHURCH OF ENGLAND FROM THE PENALTIES
OF CERTAIN LAWS (1 Gul.&Mar., cap. 18)

Forasmuch as some ease to scrupulous consciences in the exercise of religion may be an effectual means to unite their Majesties' Protestant subjects in interest and affection, be it enacted ...

XIV. Provided always, and be it further enacted. . . that neither this Act nor any clause, article or thing herein contained shall extend or be construed to extend to give any ease, benefit or advantage to any papist or popish recusant whatsoever, ...

The term 'tolerance' is not generally used in science, the term 'error bars'1 being used instead.  It is widely known that it is scientifically impossible to acheive perfect accuracy with any measurement.  The best that can be hoped for is to take a series of measurements and then combine them in a  mathematically valid way.

The observed physical quantity is dealt with as a cluster of values within which a representative value can be found. Reported values in science papers usually emphasise the imperfection in measurements by giving values with error bars.

A tolerance is an allowable, but non-deliberate, amount of variation from a physical quantity.  Tolerance is not freedom: the manufacturer must stick closely to the ideal design given and is not free to just throw a product together on a whim.

The concept of tolerance is most widely known in engineering as applicable to dimensions.  Manufactured components or sub-assemblies must conform closely to each other in size if they are to fit together.  Tolerance ranges may, however, apply to any physical or chemical parameter of a product.

The aspect of tolerance in chemical formulation which is most visible to the general public is color. Colors, colorants and colored products are made in batches.  Paint, wallpaper and such are marked with batch numbers.  If insufficient materials are bought in one batch for a decorating job, additional materials may be an imperfect match.  In the finished job, the mis-match in color shades may be glaringly obvious.

Any two components may be designed to fit together in a multiplicity of ways. Surfaces may be required to be flat, as in the mating faces of most engine castings.  They may be tubular, as in the bearing shells of an engine.  They may be spherical as in ball-and-socket flexible couplings. Other, and more common forms of fit relate to bolts, studs or shafts in circular holes, or to collars or bearings on shafts.

Two items may be dimensioned such that one is smaller than the hole it locates into.  The difference between the two dimensions gives a clearance for ease of assembly, and the fit is a clearance fit.  A loose clearance fit is termed a running fit.  If the clearance is minimal, force is often required to fit two items together, and this is termed a press fit or force fit.

There may be a deliberate lack of clearance such that one component must perhaps be expanded with heat in order to fit the two parts together.  This is termed a shrink fit.

Fit and alignment are not the same thing.  Imagine a bearing which fits in a casting, but is not in line with a similar bearing.  The shaft will not fit, even though each bearing, bearing hole and the shaft are individually within tolerance.  The most common example of mis-alignment arises from addition of tolerances.


The geometric addition of tolerances.

Tolerance addition, stacking or accumulation in assemblies affects the critical clearances and interferences in a designed product.  It is best explained in terms of two objects which need to be aligned by pegs, dowels or threaded studs in one part which must fit accurately into holes in another part. 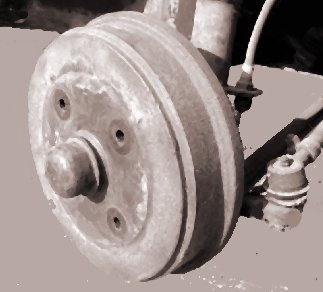 In order for any motorist to be able to replace a wheel at the roadside, the locations of the stud holes in a hub and in the wheel must match, but with a small clearance.  The studs must be a tight fit in the hub, and a loose fit in the wheel.  Wheel nuts have conical faces which pull a wheel into more precise alignment, taking up the slack and centering the wheel holes on the studs.

The stud holes lie on a circle - the pitch circle.  That circle cannot, according to the laws of physics, be a true circle.  Nor can it be accurately centred.  Let us imagine a factory in which all tolerances are expressed as 0.01 mm.   Pitch circles, circle centres, hole diameters and stud diameters  must all be within plus or minus 0.01 mm of their ideal dimensions.  To avoid simple addition of tolerances, the clearance between stud and wheel hole is a very generous 0.03 mm.

It should be clear by taking any diametrically opposed pair of studs as an example that the wheel cannot be fitted to the hub.   Take the hub pitch and the wheel pitch: one is oversize, the other undersize.  The studs are all oversize.  The wheel holes are all undersize.

The +ve and -ve tolerances do not cancel arithmetically, they add together according to the geometry of the design.  The addition of these out-of-tolerance measurements comes to 0.04 mm.  The clearance fit of the wheel holes is nominally 0.03 mm, but in this case is only 0.02 mm.

Even though each component taken separately is within tolerance, there is an excess of 0.02 mm of material interfering with the proper fitting of the wheel.  A free fit has become an interference fit by virtue of the 'stacking error', the accumulation of tolerances, the geometric addition of tolerances.

If you have found this article informative, you may enjoy other articles, mostly about language,  in my blog,  The Chatter Box.
The Chatter Box
More Articles All Articles
About