"The Terrorist Hunters" is a new book by Andy Hayman, C.B.E., Q.P.M., former Assistant Commisioner of Scotland Yard, and one-time head of the Yard's head of Special
Operations.  It is set to become a global best-seller.

Following a precedent set by a previous inept British government in the matter of "Spycatcher", the British Attorney General, a direct political appointee of Gordon Brown, the soon-to-be-outgoing British Prime Minister,  has obtained an order banning sales of the book in the UK.

When a book is banned in modern Britain it simply gets published abroad.  It is unworkable to imprison every UK citizen who buys the book abroad.  Accordingly, banning the book in the UK is not just unworkable: it absolutely guarantees that the book, which may have sold only a few thousand copies, will sell by the million.

What is also guaranteed is this: millions of voters who had not yet decided do desert the Labour party will now protest against this censorship come election day.  Is the Attorney General a Conservative party mole, perchance?

Our guardians of "due legal process" banned this book near the midnight hour via telephone.  Move aside, N. Korea : Britain wants that top spot amongst the world's most undemocratic nations with the most secretive legal systems.  Publication bans? Early morning arrests? Imprisonment without trial? We invented them all ! 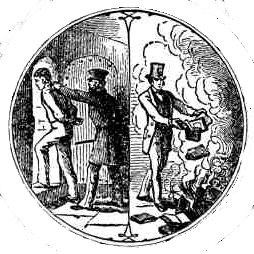 Footnote:
regular readers of the chatter box will know that I don't usually exhibit bias, don't usually write about politics and dont usually get this angry.  But darn it!  I had to ask a friend to bring me a copy of Spycatcher to see what the government was trying to hide, and now I'll have to do the same again.  It's much more convenient to place an order with my local bookshop.
The Chatter Box
More Articles All Articles
About