No, it's not a new sport.  It's one of many ways in which ice consolidates.

In order to more fully understand what is happening to the Arctic climate we need to understand how sea ice is formed and consolidated, and how it is dispersed and melted.

There are very many ways in which two or more units of ice or freezing water can combine.  Five come readily to mind: hail, snow, frost, freshwater ice, sea ice.  Let's focus on ice formation in water.

A general principle of ice consolidation and fragmentation is that when any two ice masses collide or are pressed together the outcome depends greatly on their absolute and relative masses and their rigidity.  When ice is pressed against an obstacle such as land the effects again depend on mass and rigidity.  Most commonly, shorefast ice formed this way is heavily ridged.


From frazil to nilas

The first stage of ice formation is frazil ice.  This consists of separate crystals suspended in the water.  As these crystals clump together they form grease ice.  Grease ice tends to damp down the motion of water, giving it a greasy or oily appearance and motion.

Grease ice in turn clumps together and, depending on the mobility of the water, forms pancake ice or young ice in thin sheets called nilas.  Ice pancakes are roughly circular, with a flat area surrounded by a thickened rim.  When frazil crystals or clumps collide they stick together up to a limiting mass.  Beyond that mass limit, contact causes compaction of frazil into pancakes, again with a mass limit.  Beyond that limit, edges are compacted giving rise to the distinctive shape of pancake ice.

Ice can now form as larger masses either by the pressing of pancakes together or the freezing over of the water between the pancakes.  We now see sheets of thin, young ice.  This is also called nilas.

The flexibility of ice depends on its thickness and on its salt content.  Freshwater ice contains no salt, so it is more rigid than an equivalent thickness of young sea ice.  As sea ice forms it rejects salt, but not entirely.  Over the course of time, from various mechanisms, sea ice rejects more salt, thus becoming more rigid.

When sheets of ice collide or are pressed together, there are many mechanisms which might come into play.  One of those mechanisms is finger rafting.  Finger rafting occurs when ice fractures in such a way that the two sheets move both over and under each other somewhat like clasped fingers.  The resulting join is usually stronger than the sheets of ice. 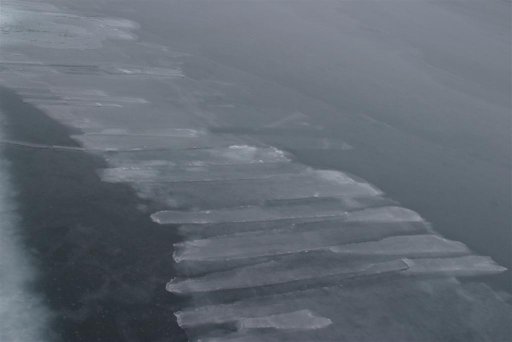 
The finger-rafting mechanism is independent of the material.  It has been studied1 using wax as the material.  This illustration shows the effect when two pre-cut sheets of flexible foam were forced together whilst being pressed down on a flat surface2: 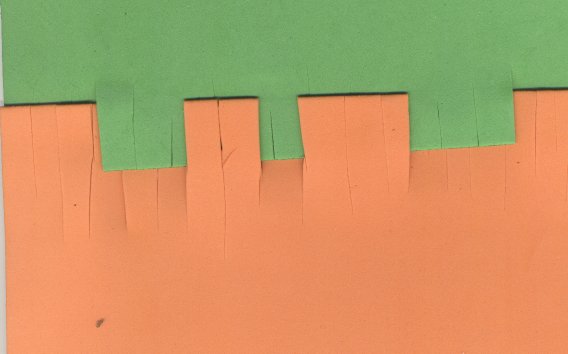 If frazil is formed in water which is in rapid motion it will only clump when it reaches some sort of obstacle.  This might be a seashore, a lake edge, or -

http://www.ncbi.nlm.nih.gov/pubmed/17359135
The Chatter Box
More Articles All Articles
About