Pseudo-skeptic claims of Arctic ice recovery have been followed by further losses in the real world.  Evidence of global warming is accumulating to such an extent that the web's unscientific bloggers have to work really hard to find anything to write about.  Times are so hard that Anthony Watts was recently reduced to writing a very lengthy anacoluthon-style dust-speck-spotting article about how Al Gore didn't make a video in one take.  Horror of horrors!  And what are we to conclude from Watts' analysis?  The experiment portrayed is valid!

... while some might say the stagecraft involved in the Climate 101 presentation wasn’t dishonest it was most assuredly staged with great literary license and dramatization of an effect that was experimentally verified elsewhere ...
Anthony Watts

Scientific blogging means writing about science without doing the readers' thinking for them.  Unscientific blogging means writing any garbage which - it is hoped - will keep readers from feeling the need to switch their brains on.  However much scientific evidence there is to demonstrate anything at all, it's a safe bet that somebody somewhere doesn't want to believe it, or - for reasons which I can't begin to fathom - doesn't want their readers to believe it.

Even as the Arctic is changing before our very eyes, there are some people who want you to look at, not at the photos and satellite images, but their latest piece of pseudo-scientific guff.  The recent news about a mistake made by the publishers of the Times Atlas has served as an excuse to cry 'havoc' and let slip a dodgy word.  Fair enough, a claim of 15% loss of Greenland's ice cover was obviously wrong.  But if you can believe Christopher Booker, the Times Atlas is going to be used as warmist propaganda in our schools.  I wouldn't think so: not at about £150 a pop.  Especially when access to Google Earth and Wikimapia is free.

... no sooner was this shocking evidence of global warming reported than voices throughout the scientific community began to question the atlas’s claims.

For a start, there is nothing new about ‘Warming Island’ — it was clearly shown on maps with this name more than 50 years ago, long before the global warming scare began. And nor is there any evidence that Greenland had in recent years lost 15 per cent of its ice.

The U.S. climate-change sceptic science blog Watts Up With That pointed out that one reason why satellite images might have shown such a huge ice-loss was that a lot of Greenland’s coastal ice sheet has been blackened by soot and volcanic ash, so that it no longer shows up white on photographs from space.

"... nor is there any evidence that Greenland had in recent years lost 15 per cent of its ice..."

Agreed!  That's what all the genuine scientific experts are saying.  No arguments there.

"... a lot of Greenland’s coastal ice sheet has been blackened by soot and volcanic ash, so that it no longer shows up white on photographs from space."

What?  I call Poe on that one! For a rational explanation of what most probably went wrong, I prefer this BBC article.

" ... there is nothing new about ‘Warming Island’ — it was clearly shown on maps with this name more than 50 years ago, long before the global warming scare began."

Whoa!  hold back there!  50 years?  Hmm.  1821 - Ignaz Venetz presents his evidence of ice ages caused by climate changes.  1895 - Arrhenius shows that CO2 is a greenhouse gas.  1930s - scientists begin to discuss climate amelioration, which, in modern language, is termed 'global warming'.  50 years?  If I may quote the late, great John Wayne: "Well, hardly!"

It is very much unclearly shown, and on only one map out of all the Arctic maps I ever saw.  That map is a basic sketch map of no scientific value.

Christopher Booker must have phenomenally good eyesight.  Here is the map in question.  It was published in 1957.  Can anyone please show me where on that map Warming Island is named?  Hint: it would be in the 'square' 2nd up and 2nd from the right. 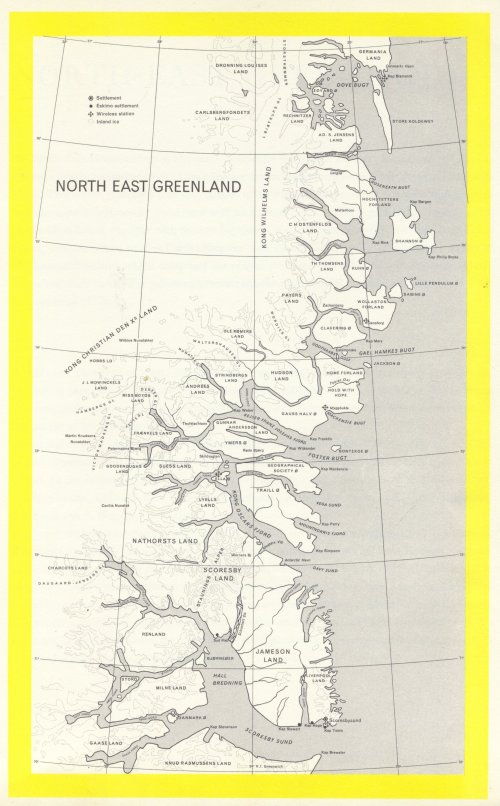 The name only appears on the 1957 map where it was added by Patrick Michaels in 2008. 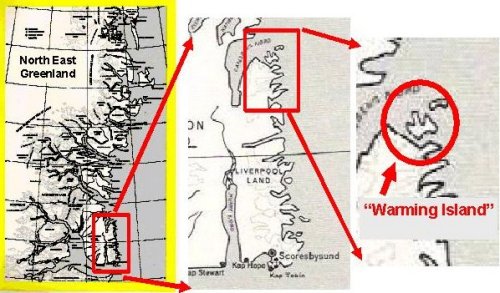 The 1957 map and Liverpool Land detail (Annotations by Patrick Michaels)


The 'one piece of evidence' test

The scientific notion of falsification is often expressed as the idea that a single piece of evidence can prove a theory wrong.  If somebody has found what they merely think is evidence it does not bring science crashing to its knees and begging for mercy.  There are rules of evidence in science just as in law.   Nobody can wave a cherry in a court of law and claim it is evidence that they weren't speeding.  Evidence must be relevant, credible and verifiable.

Any scientist publishing a graph with no data behind it would be laughed at with good cause.  A map with no data behind it is equally worthless.   Published maps intended to be taken as accurate representations of reality are derived from published sources of data.  The 1957 map bears no mark of authenticity whatsoever.  It is a piece of graphic art and as such is of no scientific value.  Scientists know this.  Followers of unscientific bloggers need to know this.  David Middleton and his host Anthony Watts need to know this.

The recent return of the Warming Island AGW myth inspired me to build a climate reconstruction for the Greenland Sea region.
David Middleton

By a very strange coincidence, David Middleton's recent resurrection of that climate change denialist myth inspired me to write about this, having finally tracked down a copy of the book in which is to be found probably the only map in the world which Patrick Michaels could use to create an entirely new myth about global warming.

When a person cherry picks a piece of evidence for purposes of advocacy it does not affect scientific findings by a jot or a tittle.  Kerasian* falsification isn't quite what Karl Popper had in mind, you can be sure of it.

For an in-depth analysis of how the 'Warming Island 1957' myth was created, please see my article at Skepticalscience.com 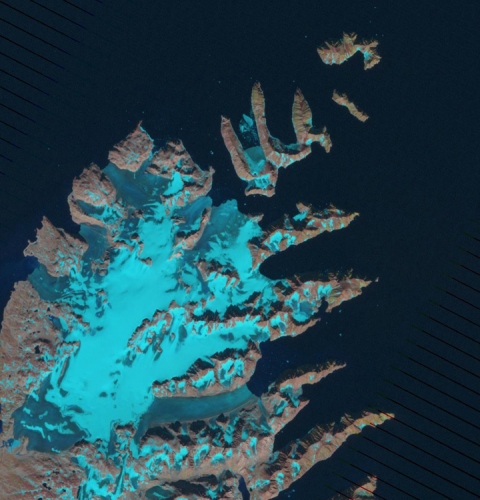 [*] - kerasian falsification - from the Greek word for cherry: κέρασος.
The purported falsification of an argument or theory by reason of the production of cherry-picked evidence.
The Chatter Box
More Articles All Articles
About