Patrick Lockerby
Hopefully You Will Get Smarter


Despite the wide use of sentences beginning with a word ending in -ly  and despite the acceptance of such usage by people who know how language is used in the real world: despite these facts there are still some people who throw up their hands in horror at such "abuse" of language.  Having been taught no doubt by repeaters of that Latin-based snobbery which was once peddled as English grammar, such people insist that -ly words are adverbs and as such they must, must, must - on pain of death - modify a verb.  "Where is the verb?", they cry.  That is woo of the first water. 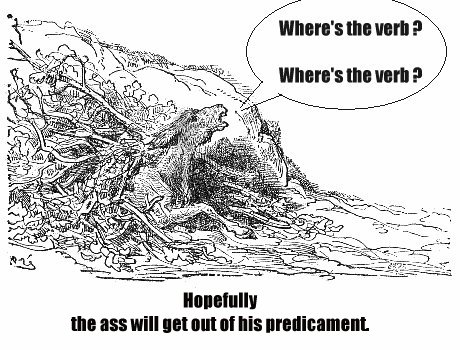 In ordinary everyday speech - as anyone who takes thought on the matter can verify - when someone starts a sentence with a -ly word - which appears to be an adverb to a language maven - they are making plain their own mental state or their behavioral norms.  A -ly word in this context is not somehow neutered: it does not mean, as some would have it: "it is to be hoped that ...".

"Edwin and Morcar, the earls of Mercia and Northumbria, declared for him: and even Stigand, the patriotic archbishop of Canterbury, found it advisable—"'

'Found WHAT?' said the Duck.

'Found IT,' the Mouse replied rather crossly: 'of course you know what "it" means.'

'I know what "it" means well enough, when I find a thing,' said the Duck: 'it's generally a frog or a worm. The question is, what did the archbishop find?'

It is of course possible to create a sentence using a -ly word as a true adverb.  For example: "Erratically we walked through the market."  However, such use is not generally observed because such constructions tend to be somewhat ambiguous.  It can mean what it prima facie appears to mean: that the walking was erratic.  But given that 'erratic' can convey the sense of 'unusual' - 'aberrant' even - the speaker may mean that the choice to walk was unusual or that the choice to walk through the market was unusual.

A sentence beginning with a -ly word usually informs the listener or reader about the speaker's or writer's frame of mind or habitual behavior.  Adverb schmadverb.


When I imply that I am hopeful that you will get smarter it is implicit in the show of hope that 'will' is used as an indicator of futurity.  Had I demanded that you get smarter I would have said so.  Commandingly.  Obviously I meant 'will' in its general sense of 'shall'.

Now there are language mavens who positively insist that 'will' and 'shall' have entirely different meanings.  Usually - note the real adverb here - they insist that will has to do with the power of the will and that 'shall' has only to do with futurity.  This is W3, woo of the third order, otherwise known to me since my childhood as wicky wacky woo.  Will or shall, either term may be used with emphasis to indicate a definite wish, desire or act of will.

Adult: "Will you come here now!"


In ordinary speech and, nowadays in most writing, shall and will are both abbreviated to a common form: 'll.  Now if the two words were really that different, wouldn't the abbreviation have evolved as two forms?  But consider the normal everyday use of 'll.  If someone said to you: "I'll take it under advisement" you would have to be screw-loose pedantic to respond: "do you mean shall, or do you mean will?".  The meld of shall and will in common usage should be enough evidence for any rational and dispassionate observer that the two words have come to mean exactly the same thing.  A bit like 'who' and 'whom', really, but that's another story.

To whom it'll concern

Shall I, will I, what'll I do ?
Shall 'will' mean the same thing to me and to you ?
Will you think what I shall ?
Shall I think what you will ?
It shall all come out well in the wash, so it will.


More mayhem, and some science >>
The Chatter Box
More Articles All Articles
About