Patrick Lockerby
The Voynich Manuscript part 4 : Not So Mysterious ?

The Voynich manuscript was written in an as yet unreadable script.  It is named after Wilfrid Voynich, who acquired it as a dealer in 1912 from the library of Villa Mondragone, a Jesuit college in Frascati, Italy.  It is now in the care of Yale Library.

In my previous articles on Yale Library's Beinebecke MS 408 I focused on its background.  I am now going to discuss some basic possibilities about its unusual script.  I am still working on an attempt to transcribe the text into modern English.  If I succeed, my readers here at scientificblogging will be the first to know.

I now give my reasons for believing that the manuscript is not written in code, but in an odd script.  The underlying language will almost certainly be found to be medieval vulgate Latin.

The first thing that strikes anyone on seeing MS 408 for the first time is its overall oddness.  Nothing seems to make sense.  Quite apart from the script, which matches no known alphabet, the pictures seem to be just a fantasy.  Nobody has, as yet, positively identified even a single plant from its picture. 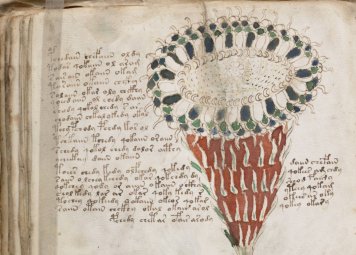 In medieval times, a physician would carry a materia medica, for three reasons I suggest.  Firstly, ownership of such a book was in itself a mark of erudition, a medieval equivalent of a degree or a license to practice medicine.  Secondly, the book could be shown to the - presumably illiterate - patient to illustrate some points about illness or medicine.  Thirdly, the physician could consult the book for recipes and ingredients rather than memorize them.

I suggest that this particular materia medica would have served those purposes well enough and would not have appeared fanciful to a majority of people when it was written.  Per contra, it would have seemed to be little out of the ordinary.  I suggest that MS 408 contains a synthesis of  ideas and beliefs know to most people in medieval England, France and neighbouring countries.  Those ideas and beliefs were transmitted across the known world an across the centuries, losing much information in the process.  It is not just in language, but also in art that we can see how ideas change and can be corrupted through the years and centuries.

In the Voynich ms is a fold-out which is often described as the 'rosettes' page.  It looks very mysterious to us at first. 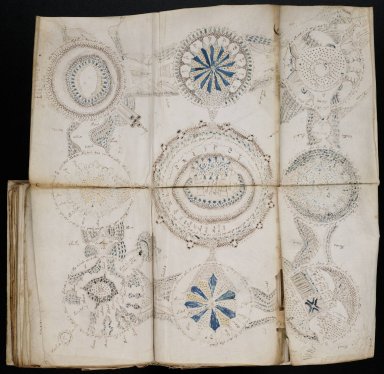 I suggest that any average British person of about the year 1350 would recognise it immediately for what it purported to be when drawn: a map of Baghdad.  In the top left and bottom right are faint images of the sun - a convention in map-making for showing east and west.  My suggestion of Baghdad, and the orientation, are supported by clues in the centre panel. 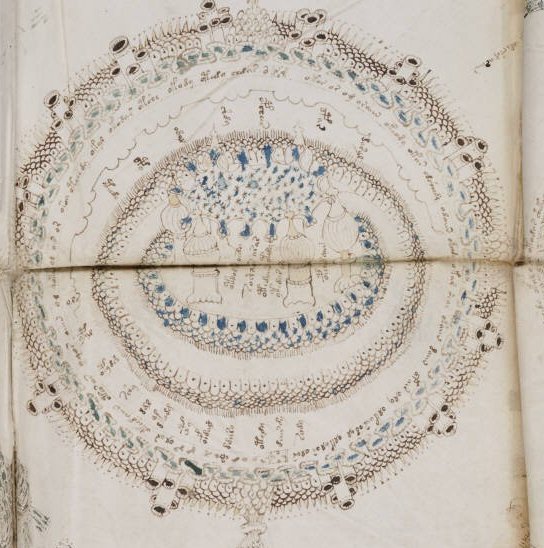 The onion domes could be representative of any country influenced by Islam.  But the only circular city recorded in medieval times, as far as I can discover, is Baghdad.  This Voynich panel fits a description of early Baghdad in 'History of Baghdad' by al-Khatib al-Baghdadi.  The city was built to a circular plan by Abu Ja'far.  Later, Al-Mansur built a surrounding wall with four gates.  He added two walls, the inner wall being higher than the middle wall.  Between the walls were two fasils, empty defensive areas.

There were 18 towers between each gate.  The artist shows these as clusters of 6.  One wall had an extra tower - shown here as an extra cluster of 6.  The four gates at the north, south, east and west were domed.  There was a great dome in the city, a major landmark for about 180 years, which collapsed due to heavy rain about 941 CE.  Baghdad was sacked and burned in 1258.

There were defensive moats and ditches.  The central palace was noted for its fine draperies.  In the top left panel is a tower.  This has been described by some observers as being 'in a hole'.  I suggest that the inexpert drawing leads to an optical illusion: the representation is of a tower on a mound.  There was such a tower in the fields outside medieval Baghdad.

I suggest that acceptance of the Baghdad theory does not automatically mean that any part of the Voynich script is Arabic or any related language.  My initial assessment is that it is mainly Latin, with influences from other European languages.  It was most probably written in England.  There are two proofs that Baghdad was famed in England long before the Voynich ms came to be compiled.

This coin was made for King Offa in imitation of a dinar of Al-Mansur, Caliph of Baghdad!

In medieval England the story of Loris and Blanchefleur was very popular between about 1200 and 1350.  It is a typical European 'take' on a story of a man entering the sultan's harem by subterfuge.  It is a European adaptation of a story from the Arabian Nights.  From knowing this story, and from travelers' tales, the average British peasant would have heard of Baghdad, its strange onion domes, its baths and its library - called the House of Wisdom.  It is said that at the sack of Baghdad, the waters of the Tigris ran black with the ink from the books dumped into it.

Now imagine a traveling physician or midwife in medieval England carrying the Voynich ms.  There are many pictures of herbs, an apothecary section dealing with leaf and root preparations and aromatherapy, a balneology section and an astrological section charting the best times for conception and birth.  This 'proof' that the bearer had studied medicine at the House of Wisdom in Baghdad and that they had once attended the Caliph's harem would surely increase the client fees payable!

In my next article I briefly discuss the evolution of the materia medica from its source via Europe and from its source via the islamic countries.  I also show further information suggesting that the 'rosettes' part describes places and features from medieval Baghdad. The wierdness of the plants, I suggest, is a further clue pointing to the likelihood that the language beneath the Voynich text is medieval Latin.

Continued in The Voynich Manuscript part 5 : The Baghdad Connection
The Chatter Box
More Articles All Articles
About