Patrick Lockerby
What is a BLEVE?

It is fairly common knowledge that removing the radiator cap of a vehicle with a hot engine will cause the ejection of boiling water.


The cooling system of a liquid-cooled engine is pressurized for two reasons.  The first reason is to let the engine run at an optimum temperature.  The second is that heat transfer by direct contact increases with pressure.  That last reason is why CPU coolers use strong clamping systems.  Mostly.  (Keeping the water from evaporating doesn't figure as a third reason - there are better engineering solutions to that problem.)


When the pressure in a container of any kind is raised, the boiling point of the liquid inside is raised.  In the case of a typical small engine cooling system the boiling temperature of the water inside is raised from 100oC to about 125oC.  The pressure in a typical road auto is around 23 p.s.i.  On releasing the radiator cap, the water, now at atmospheric pressure, boils so rapidly and violently as to eject hot water.  Kids!  Don't try this at home!  (Assuming you can get your vehicle through the door.)

It isn't just water that behaves in this way, but any liquid whatsoever.

Most BLEVE events that get reported concern inflammable gases and liquids.  If a bottle of gas overheats enough then its internal pressure will exceed the design safety threshold of the container and it will fail.  A common failure mode is where a small rupture allows gas to be ejected which then ignites.  This may add to the temperature rise in a runaway or cascade event, leading to the sudden and dramatic bursting of the container.

If this happens to a domestic aerosol can in a garage then the garage will almost certainly survive.  But I have seen the aftermath when a 13 kg bottle of propane exploded in a garage fire.  In fact, the bang was heard across much of the town.  Fortunately, much of the blast went upwards as it tore the roof apart.

It sometimes happens in an accident that an outlet pipe is ripped off.  The ignited vapor in such a case may not rupture the container but - if the container is large - may cause a blast sufficient to do extensive damage.  See example below.

If a container vents combustible vapor into a confined space where it can mix with air in the presence of a source of ignition it will explode.  If the explosion acts as a feedback - stressing an already heated container - then a second-stage BLEVE may occur.  That is when the containing vessel ruptures and the vapor explodes.  Fortunately, most BLEVE events are first-stage.  They just make a big bang.  A big bang BLEVE 1 which destroys a building is much better than a bigger bang BLEVE 2 which destroys a city block.

It is important to note that the complete rupturing of a pressure vessel is preventable.  All you need do is incorporate some sort of vent mechanism.  This may or may not be resettable, depending on the intended application.  Many kinds of batteries use resettable vents to let evolved gases escape.  With smaller batteries - such as are used in fire alarms, burglar alarms and flashlights - the venting goes unremarked.  In the case of common lead-acid vehicle batteries, the vented gas from an over-charging battery has been known to destroy the battery if ignited, as by a spark.

Ideally, any vent should eject vapor directly up into the atmosphere.  If that is not possible or desirable then the pressurized container should be housed in an enclosure designed to contain the pressure of any resulting explosion or to vent the blast in a controlled fashion.

As far as I know there is no recognized classification scheme for BLEVE events.  I propose that there should be, for the benefit of engineering professionals and firefighters.  Here is my suggestion for such a scale, for discussion.

Level 1 - the containing vessel is not ruptured.
Level 2 - the vessel is ruptured.

This was something on the order of a BLEVE 1-5 on my scale: 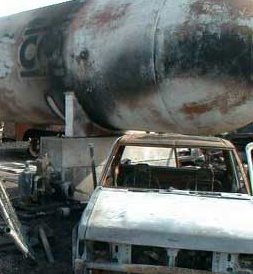 Incredibly, this 18,000 gallon propane tank - the source of the vented gas - seems not to have ruptured.  However, a bobtail* about 14 feet from this tank exploded.

This is a cropped image from a chemaxx.com article: Propane Tank Fire&Bobtail BLEVE


* Bobtail - the tractor unit of an articulated truck, or lorry.