Patrick Lockerby
What Is A Tipping Point ?


The term 'tipping point' is in widespread use in English, but what does it mean?


Imagine a child's seesaw with an empty bucket on each end.  The seesaw is initially at rest with one end touching the ground.  If left alone, nothing would happen - there would be no motion.  The whole mechanical contraption would be in a static configuration - in static, or stable equilibrium.

A sensitive dial scale is placed under the lower end of the seesaw.  You now drip water or trickle sand into the upper bucket.  For a long time, nothing much happens.  Eventually, on close observation you will see that the needle of the scale shows movement.  With each grain of sand or drop of water the needle moves more.  The needle starts to twitch.  Suddenly, just a tiny amount of sand or water is enough to tip the seesaw completely.

The point where the seesaw is 'twitching' is very sensitive to even a small application of force.  Once such force has been applied the seesaw tips.  Due to the effect of momentum, to stop it tipping you would have to fill the other bucket instantly, and with a greater mass than the one causing the tip.  The mass needed to stop the motion is many orders of magnitude greater than the tiny mass needed to push the seesaw past its tipping point.

One application of this principle is the tipping bucket rain gauge.  Two buckets in one assembly arranged like back-to-back garden wheelbarrows share a common pivot.  Rain passes through a collecting funnel and into one bucket.  When enough water is in the bucket, the tipping point is passed.  The full bucket tips out its contents and the other bucket, now under the funnel, begins to fill.

It is a simple matter to connect the bucket mechanism to a dial, or to use one or two micro-switches to count the buckets of water.  If the tipping bucket is carefully made and calibrated then dial motion or pulse count can be used to indicate rainfall in inches or millimeters.  If you add a clock you can measure flow rate directly. 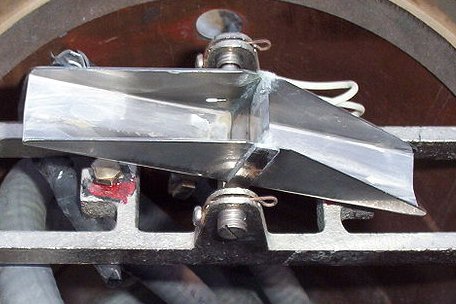 Now, although you can have a lot of fun with a rain gauge, you can have a lot more fun with measuring humidity.  All you need is a mechanism which operates on principles of humidity and which exhibits a tipping point rather like the tipping bucket mechanism.  Ideally it would make a better teaching aid if it was exceedingly twitchy.  What we need is a device that oscillates and then nose-dives into a new, but temporary, state of stable equilibrium.  It would be even better if the gadget had a sort of 'Sesame Street' look about it so as to encourage small children to get curious about science.

Fortunately such a gadget already exists.  Just like the tipping bucket, you can add a micro-switch or optoelectronic sensor and a clock pulse generator.  The tipping pulse rate is directly related to atmospheric humidity.  All you need then is to calibrate the device using some knowledge of physics.  Well, quite a bit of physics.  In fact, a shed load of physics.  Torque, momentum, oscillation, evaporation, condensation, capillary action, gas expansion and contraction ... oh yes - and tipping points.

The following video is a wonderful demonstration of a humidity controlled tipping point experiment.  Enjoy!
.

I love to watch dipping, tipping drinking ducks, don't you?

All along the backwater,
Through the rushes tall,
Ducks are a-dabbling,
Up tails all!