Many people have predicted the end of fundamental physics.  Often these are at the end of great progress such as the late 19th century when classical physics was quite well understood, or in the midst of such a flurry of action when it seems like all the pieces are coming together such as in the 1920’s and 1930’s in nuclear and quantum physics.  Clearly, there are many mysteries and surprises yet to uncover in fundamental physics but is there a pattern in its historical progress that might indicate where we are in its completion.  This type of analysis (also called logistic analysis or learning “S” curve patterns) have been often observed in business and the rate of technology development, e.g., steam engine efficiency.  Cesare Marchetti was a prolific researcher in this field looking at the topics of energy fuels, environmental actions, and worldview dynamics. About a decade ago, Theodore Modis, hypothesized that the history of the universe seems to demonstrate a large logistic progression.

This leads us to the question of how scientific fields progress. Are scientific fields developed faster as more is known?  Or are fields developed slowly at first as definitions are determined, then at a relatively constant rate of progress once the fundamental issues have been defined, and then again at a slower pace as the remaining issues are explored and resolved with the constraints that they must be consistent with the earlier discoveries?

To gather more evidence to address these questions, an important field, fundamental physics, was identified and analyzed.  A source for much of the technological advance has been fundamental physics and its later developments into applied physics.  Fundamental physics history has been quite well documented through research papers and biographies, and is dependent on a relatively small set of field colleagues at any one time.

The methodology and analysis were to categorize an independent list of historical physics discoveries into traditional subfields and then evaluate each subfields progress via logistic growth patterns. Then an overall pattern of the set of subfields was also analyzed. The events in the history of physics as listed on a website were assigned to the 12 subfields of classical gravity, classical mechanics, optics and wave physics, thermodynamics, electrodynamics, atomic physics, special relativity, nuclear physics, general relativity, quantum mechanics, high-energy particle physics, and string physics.

It is seen that, in general, as fundamental physics developed, initially there was a speeding up of research in subfields.  Decreases are seen in both the time to complete a subfield and the time between subfields. However, after about 1930 the relative rate of new subfields in high energy physics and beyond has slowed.  This change in the might indicate that the logistic nature of the field’s discovery is being seen; i.e., the subfields with the smallest transition times might be interpreted as the midpoint (or inflection point) in the development of the fundamental physics. 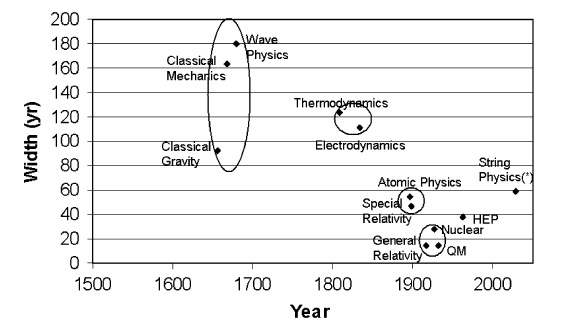 Figure 4. Graph of the characteristic time (20% to 80% completion time) versus the year of median (50%) completion for the 11 subfields.  The circles show the groupings of subfields with similar median completion times into stages.  Note that the right-most point (string physics) is just an estimate.

By assuming that each stage contributes the same amount towards the overall development of fundamental physics, the overall completion fraction curve with the 5 completed stages and one uncompleted stage can be plotted.  Since the stage that is centered at 1925 has the smallest characteristic time, this point is chosen as the center of the overall transition.  Symmetry of the curve would have 3 stages beyond (HEP, string physics, and another yet unidentified stage) the center stage to match the 3 stages before the center stage.  This leaves only the logistic width parameter, a, to fit.  This data and a logistic fit to the curve are shown in Figure 5, with a logistic a parameter of 1/ (77 years).  This corresponds to a characteristic time of 212 years for the transition to go from 20 to 80% completion.

Within this one field of science, the nature of logistic development is seen in both the subfields and the complete field.  If the logistic interpretation is correct and is followed, the data suggest that string physics is likely to be 50% complete in 2030 and 80% complete in 2090.  However, if the development curve is logistic, then the development curve would be symmetric around the midpoint, identified as the “Golden Age” of physics in 1920s with the simultaneous developments in general relativity, quantum mechanics and nuclear physics.   This would imply there should be symmetric stages that correspond to each other; i.e., if 3 stages are identified before the midpoint, then there should be 3 after the midpoint.  String physics is only the second identified stage, leading to the suggestion that another stage in the development of fundamental physics might come after string physics.  If symmetry holds, the last stage’s 20%, 50%, and 80% completion times would be 2100, 2180, and 2260.

Cumulative field completion assuming that each stage has an equal weighting.  The logistical fit is based on the historical stages.  The last two points (Stage 6-string and 7) are positioned assuming symmetry around the midpoint (Stage 4).

Obviously there are many limitations with this type of analysis dealing with the selection and categorization of discrete events, subfields, and stages.  Many assumptions were made along the way, such as that each event and stage had equal importance, which was similar to the analysis of Modis.  There is no claim of a mechanism generating the possible logistic development, and no effort was made to sort out potential influences such as funding levels and public interest.