Tweet
Dr. Daniel Reardon, an astrophysicist, is being a good sport in telling his story showing that modern scientists are not the applied physics geniuses like The Professor on "Gilligan's Island."

He read a paper saying people touch their face too much and that could lead to getting SARS-CoV-2 into the body where it might cause COVID-19, and since magnets repel and he was bored he tried his hand at invention.

“I have some electronic equipment but really no experience or expertise in building circuits or things,” he told Guardian Australia with a refreshing blank honesty. He tinkered with a device that could detect a magnetic field and figured that by putting magnets on his wrist he could set off an alarm.  But it did just the opposite.

Still bored, he started playing with his neodymium magnets and put one in his nose, but it really got weird when he placed one in the other nostril. He couldn't get them out. He read the Internet and saw it had happened to a child and figured the solution was more magnets. But when one slipped he ended up with two magnets in his left nostril. "At this point I ran out of magnets.” His health care worker partner thought it hilarious but he still needed to go to the hospital. 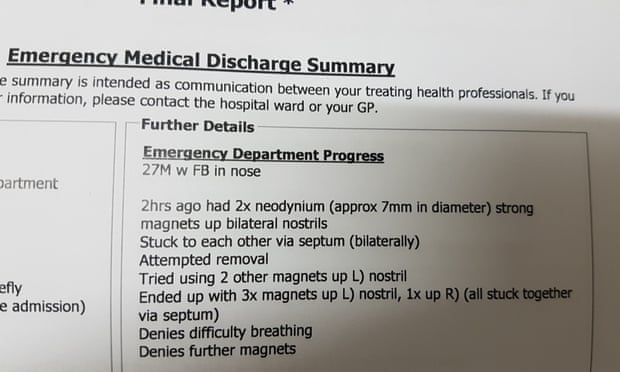 Courtesy of Dr. Daniel Reardon, who is a really good sport for sharing his story.

Many of us have been there. In the late 1980s I bought a late model Jaguar four-door sedan; maybe an odd choice for a young guy but I did. This was the year before Ford acquired the company and instituted some modern sensibility into production. They made beautiful cars that worked great when they worked but overall had a bad reputation for quality and had earned it. Over time I had things go wrong that I'd never even known could go wrong. It had twin gas tanks and one leaked. Then the other also had to be replaced. One time the cable that goes from the gas pedal to the engine throttle plate broke. And one time I slammed the door too hard and I heard various clattering noises and, sure enough, the window would no longer go down. So I took the interior door panel off. I saw clips but little idea where they went and, in pre-Internet days with no experience, not much clue. The solution was to open the passenger trim panel. So I did. But as I was taking it off, those clips fell out, which was more evidence of that brilliant Jaguar design. So now I knew I had to be really careful taking the trim panel off and I went to the back doors and, you guessed it.

I took it to my mechanic, a fellow veteran, and told him the story and he said, "Please tell me you didn't work on the fourth door."