Tweet
In 2012, the Obama administration set out a new emissions standard for cars, ostensibly in an effort to help the subsidized electric car segment, since only direct emissions counted and now the electricity that is 85 percent powered by fossil fuels.

It was aggressive, and going to be costly, but auto manufacturers saw the way the wind was blowing and agreed, knowing a new administration might be in power in 2017.

Sure enough, the Environmental Protection Agency and National Highway Traffic Safety Administration decided that the 2020 standards will be strict enough for now and are removing the far more difficult short term standard for gasoline vehicles and amending it to 31 mpg in 2025 from the 28 now. They are instead focusing on CO2 emissions because MPG is really irrelevant when the goal is less pollution. 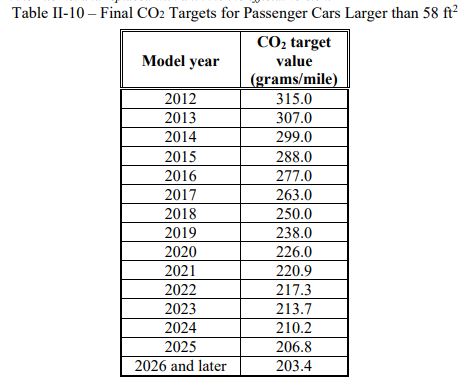 It's still pretty terrific but activists are spinning this like EPA is being overruled by Trump after readily agreeing under Obama. They never consider it was the opposite. No impartial scientist at EPA thought it was a good idea to start counting invisible particles - small micron particulate matter, PM2.5 - as a pollution hazard.

The EPA had that decision handed to them from above, and not from scientists. It was based on one epidemiology paper where EPA didn't get the raw data and the group refused to hand it over to independent epidemiologists. Smog, PM10, is a killer, that is well established, but it's almost like academic air epidemiologists were worried about being out of jobs once America had some of the best air quality in the world, so they invented a new demon. When they were shown to be lying about deaths - zero have resulted from PM2.5 - they changed the verbiage to be "reduced" life span, as if anyone could know how long people might live if they didn't have particulate matter that you need an electron microscope to detect.

Now EPA needs to eliminate California's exemption from its air standards so cars for the tens of millions of poor people in the state can be more affordable. It hasn't helped the environment one bit, unless you also believe in particulate matter phantasms, but has made the cost high, because the aftermarket cannot sell used cars from outside California. And that has meant higher emissions older cars stay on the roads longer.