Tweet
It is election season so political journalists and their allies are using every soundbite during this pandemic for their own gain but the U.S. has been more right than wrong in our response - especially when we ignored WHO.

The President mentioned hydroxychloroquine as a treatment for COVID-19, the disease that can result from the SARS-CoV-2 coronavirus that originated in Wuhan last year, and the political knives came out for him. He had put in travel restrictions when the United Nations World Health Organisation was saying that the U.S. should not do that and had just denied that coronavirus was a human-to-human disease at all.

In the former case, he trusted peer review - which everyone said he should do until he did - and in the latter he did not trust WHO - which everyone said he should do and which would have been a huge mistake. It turns out that if China had listened to the actual Democratic China - Taiwan - instead of obsequiously rushing to repeat communist talking points - we could have reduced transmission by 95 percent. Half of Brazil's cases came from Italy in the five weeks after the U.S. reduced travel. Italy would have self-isolated earlier if WHO had not suggested travel restrictions were xenophobic.

Now the U.S. government is pulling funding for WHO while an investigation occurs, and they are right to do so, but because it is an election year people who use love of science as a veneer for their politics will be at war again. But he is right. There are already claims we will lose "prestige", whatever that means, and not be allowed in countries where WHO is. That's fake news promoted for political effect and it should be ignored, because it was the same nonsense used when we put in the travel restrictions Canada and everyone else did six weeks later. 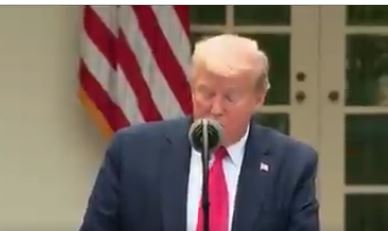 President Donald J. Trump announcing an investigation of WHO.

WHO accepted everything China claimed at face value - that is not scientific. You don't accept the words of a communist dictatorship that arrested doctors in Wuhan when they tried to be whistleblowers about the virus. One of them even died "from the disease" at age 32, and no one with any understanding of China or microbiology believes that was the cause of his demise.

The WHO should not worry about the U.S. pulling funding. They can claim that a drop in funding will matter - as if the WHO gets lunch money from us every day - to world coronavirus efforts but then they will have to answer questions about how much help WHO has been so far. If it does matter, China can secretly pick up the financial slack, just like Russia does for American environmentalists who are helping promote their government. It is the least the Chinese can do in payment for the U.N.'s covering fire against scientists who have been asking why the country did nothing from 2007 to 2020 to mitigate the chances of this happening.