Who Is Surgisphere And How Did They Get Into A Lancet Hydroxychloroquine Paper?
By Hank Campbell | June 4th 2020 12:18 PM | Print | E-mail

Tweet
Surgisphere, a company that bills itself as having one of the largest and fastest hospital databases in the world, was riding high a few days ago. Their data had led to papers in both New England Journal of Medicine and The Lancet, they moved WHO to stop clinical trials because their data showed no benefit but some risks of hydroxychloroquine.

Not bad for a company with three employees and 170 Twitter followers.

Social media presence does not mean everything, of course. Science 2.0 has had 300,000,000 readers but our two sites on Facebook only have 120,000 members. If you like I F**king Love Science or 'science is a corporate conspiracy' theories, Facebook is the place to be, but it does nothing for our traffic. People find us in Google search.

Still, three employees (they also claim 11) managing the world's largest database of hospitals is such a breathtaking achievement that not only should it have more followers than a Kardashian, its leader, Dr. Sapan Desai, should be teaching business classes all over the world. Peter Drucker wanted no more layers of management than the Catholic church has but this vascular surgeon can move the whole world with a handful of people.

Until scientists began to ask the awkward questions journalists are supposed to ask; who is this company? Where is their data and methodology? No one seems to know. An audit by the co-authors of the recent paper (why didn't they do that before sending it to the journal?) found they could not verify the data. 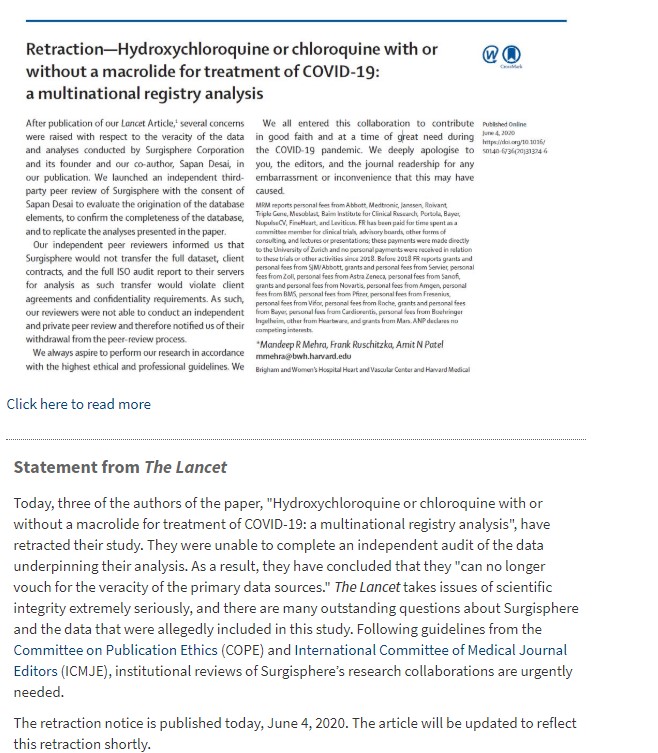 There is no still no evidence hydroxychloroquine will work for COVID-19, and since it was only an observational study the paper shouldn't have been used for final decisions any more than a mouse model or food frequency questionnaire would. Yet it was, primarily because in modern times observational claims are not only counted as equal to hard science, media portray them as overlords of chemistry, biology, and toxicology. We can call it The Curse of IARC.

Media desire to rush to print with anything, especially if it will undermine their political opposition, has exposed not only the weaknesses of peer review, I have written here and in USA Today and Wall Street Journal and more about how activists have abused that for years, but the weaknesses in modern journalism. w Even a part of science journalism has unfortunately become more about promoting The Resistance than being trusted guides for the public on complex subjects.

The authors have done the ethical thing and retracted the paper, which I would have thought excessive if it was just an error in classification, as the original the Letter of Concern said. But there is no way to trust anything this company has ever done. The good news is that the process of science worked. Though the paper fooled a sloppy review process - that happens quite a lot - it didn't fool the science community in post-publication review. Which is a process that has once again shown a lot of value.

What do I not trust and never did and neither should you? Invited commentaries. Here is what Professor Christian Funck-Brentano wrote about the now-retracted paper: “This well-conducted observational study adds to preliminary reports suggesting that chloroquine, hydroxychloroquine, alone or with azithromycin is not useful and may be harmful in hospitalized COVID-19 patients.”

Did he read it? Or is The Sorbonne not what it used to be?