Pessimistic scenarios of the future are popular and always have been. By 700 BC, the Greek philosopher Hesiod lamented in Works and Days that the Golden Age for mankind had passed. Paleolithic patterns of thinking lead us to remember these negative messages. Recognizing danger was once necessary for survival, but now we create exaggerated anxiety over things our ancestors would have ignored. In a survey, more than 70% of respondents said they thought the world was getting worse, and only 5% stated that is was getting better. People are concerned about terrorism, war, immigrants, and the destruction of the environment.

Newspaper headlines give us the impression that Doomsday is almost upon us.

An objective look at the world finds the pessimism is unfounded. Instead, there is a reason to have a great deal of optimism. 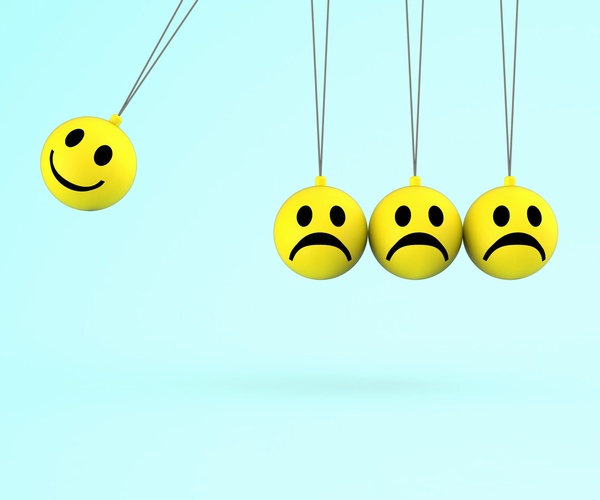 The standard of living is rising

In his book The Rational Optimist, Matt Ridley says that today's ordinary man has a higher quality of life than a king did in the past. When a person is in the mood for a certain kind of food, he can go to a variety of restaurants or shops. Therefore, he can access the service of more servants and products than the French court could at the time of its greatest glory.

The situation regarding entertainment and healthcare is similar. From a medieval perspective, the current standard of living can be described as paradise on Earth. That's why people from other cultures want to live in Western countries. But why are living standards and prosperity rising? Ridley says it’s due to an exchange of products, services, ideas and the development of innovation. Ridley isn’t an idealist; he’s aware of current problems but believes they’ll be solved.

The world is safer than ever

The world has never been as safe as it is today - this is the central message of the book The Better Angels. Harvard professor Steven Pinker uses data analysis to demonstrate that, in the long run, murders and other crimes have fallen. Nowadays, in wars and other violent conflicts, deaths are at their lowest number in history. Less violence in the world may also be related to the fact that people are more intelligent.

In addition, the current generation is more "moral" than the previous one in terms of decreasing promiscuity (the lowest since 1920) or alcohol and drug abuse.

The environment is getting better

Although we see many news reports on ecological catastrophes, it seems that humanity as a whole is more conscious and the general situation is gradually improving. The shrinking of the ozone layer has prompted an adequate response. We are seeing the first signs of improvement, and the ozone layer is returning to normal.

Despite many terrible prophecies, from Malthusian predictions of overcrowding to the Limits to Growth, it turns out that people are not only aware of these problems, but are solving them as well. In countries around the world, environmental ministries have been established and non-profit organizations are calling for solutions to problems. The carbon intensity of the US economy has been declining for over half a century and CO2 emissions have also been declining worldwide. Most countries in the world have ratified the Paris Climate Agreement, which calls for emission reductions. The United Nations has adopted the Goals of Sustainable Development, which aim not only at improving the environment in general but also at improving the quality of life around the world.

Inequality is an obstacle to society's development and well-being. While the standard of living in the West has risen for centuries, in other civilizations it has stagnated, causing significant global inequality that peaked in the 1970s. At that time, the situation was changing - globalization began, barriers to the free market were removed, and many development programs were introduced. Global inequality has fallen for more than a quarter of a century due to the decreasing number of people at risk of poverty.

Developing countries are also getting the latest technology, so they don’t have to go through the whole development cycle that Western countries have gone through. In the jungle of Sri Lanka, for example, you can surf mobile internet faster than in many places in the West. The use of the Internet is leading to the spread of knowledge and the further elimination of geopolitical and social inequalities.

The rich are helping

There are pessimistic arguments that inequality within countries is increasing and wealthy people are only getting richer. This is true, but it is also necessary to add that these people often earn their money themselves. In contrast, wealthy dynasties (e.g. noble families) are losing power. In the US, over 60 percent of billionaires are self-made. It turns out that keeping wealth for generations is harder than earning it.

Moreover, today’s generation of technological billionaires is altruistic. Many of them distribute their money between the needy perhaps more than any state or organization would. The accumulation of capital in the hands of individuals prompted an industrial revolution and led to the victory of the West; in contrast, communist egalitarianism proved to be ineffective. That's why Google's founder, Larry Page, would like to give Elon Musk all his possessions after his death to make his dreams for a better future come true. Mark Zuckerberg uses almost all his property to eliminate inequalities. Warren Buffett plans to give away 99% of his property. Bill Gates is giving away nearly all his fortune. The report published by his foundation shows how it is helping and how the world is getting better.

These facts do not mean that there are only a few problems that need solutions. Objective data doesn’t help people in Syria or Sub-Saharan Africa or people in developed countries who suffer from social exclusion, illness, or poverty. We need to realize that if we don’t change our surroundings for the better, it could lead to even worse circumstances.

Yet we should also keep in mind that being pessimistic can distort reality and lead to self-fulfilling prophecies. If most people think they’re living in a world that’s getting worse, then they’ll find that they are.
Eduard Petiska
More Articles All Articles
About

Dr. Eduard Petiska, Ph.D., is a postdoctoral researcher in the Department of Environmental Education at Charles University Environment Center. His...