Erin Richards
Although the theoretical applications for stem cell research are seemingly endless, the far-off possibilities are not as awe-inspiring as some scientists would like. Setbacks, ethical concerns and funding are all part of the hurdles that face all new scientific research, stem cell research especially. However, drastic results and benefits may be closer than previously thought.

An article documenting initial positive outcomes for MS patients who underwent spinal stem cell transplant was published in the summer 2009 edition of Multiple Sclerosis Quarterly Report. This article shows the first results of the nationwide NIH sponsored HALT-MS study. Patients showed increased initial neurological function after the procedure regardless of discontinuation of medications to treat symptoms of MS. 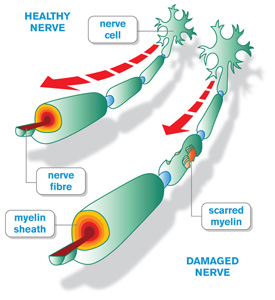 This illustration demonstrates the destructive action of MS. The immune system attacks brain and spinal axons covered with a protective myelin sheath. The nerve cell on the left is healthy with an intact myelin, while the cell on the right has damaged myelin. Progression of MS continues to break down myelin around nerve cells until neuronal function is impaired completely. Photo credit: University of Rochester Medical Center

The study examines the effect of high-dose immunosuppression, and autologous stem cell transplantation on MS and its symptoms in patients not responding to current available treatment options. Positive results will demonstrate improved neurological function and protection against the degeneration of the nerve fibers that come under attack during progression of MS.

Author of the article, George H. Kraft, MD, MS, and director of the Western MS Center in Seattle, along with fellow colleagues, show promising initial outcomes from the first three patients entered into the HALT-MS study and the first to undergo the autologous stem cell transplant. All three patients had severe relapsing MS and impaired neurological function. After the transplantation, all three showed stable and significantly improved neurological function, without the aid of further MS treatments.

The first step of the study includes negating effects of the immune system, which inflicts attacks on axons and their myelin sheaths in the nervous system in patients with MS. Following the eradication, stem cells, either from the patient or a matched donor, are transplanted into the patient. These stem cells have the ability to generate new blood cells, new bone marrow cells and new immune cells to rebuild the immune system. This would create a new immune system that would not attack nerves and thus bypass the cause of MS. 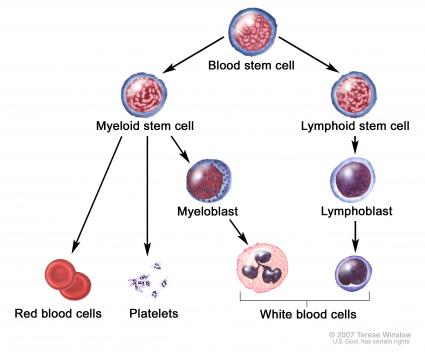 This illustration shows the differentiation of a blood stem cell, like the ones used in the HALT-MS study. The blood stem cell has the ability to produce the missing parts of the immune system after radiation and immune suppression and eradication. Blood stem cells can make blood cells and platelets, as well as bone marrow cells and key immune system cells. Photo credit: University of Minnesota Masonic Cancer Center

Kraft and researchers believe that their study will not only indicated the direction for a cure for MS, but also given them important data about unrelated axonal degeneration. They foresee that stem cell treatment will suppress the immune response that demyelinates axons in the brain and spinal cord, greatly reducing, if not eliminating, the caustic damage of MS worldwide.

Patients eligible for the study have severe, refractory relapsing MS patients and for whom conventional MS therapy is unsuccessful. The HALT-MS study is still actively recruiting eligible patients and is currently being held in four research centers across the US. There are currently 400 patients with MS worldwide who have been treated with stem cell transplantation.

Although this treatment may not be the absolute "cure" for the cause of MS, and other autoimmune diseases, the  benefit of stem cells seen in helping reduce some symptoms of MS shows that we have only yet begun to tap the potential of stem cells.