"All Five Major Health Certifications": Drake’s Organic Spirits Wants You To Think Its Booze Is Better For You
By Hank Campbell | January 10th 2019 03:00 AM | Print | E-mail

Hank Campbell
Drake’s Organic Spirits is touting it is the "first and only spirits line in the world to receive all five major health certifications." By "health", for four of them they simply mean manufacturing or cultural preferences; kosher, vegan, Non-GMO Project, and USDA Organic. (1) For the health-related one, gluten-free, there is no gluten in rum (sugar/molasses) anyway and since they use the same ingredients for their vodka as their rum, there is no gluten in that either.

And finally, by "spirits line" they mean the mixes that go in their rum and vodka, not the alcohol itself.

In other words, their health framing is just marketing hoopie, they even made sure to avoid violation of the Treasury Department's Alcohol and Tobacco Tax and Trade Bureau warning about using GMO claims to suggest health benefits for booze, the way British company Diageo recently was with its star-laden claims about Smirnoff vodka. (2)

What about the booze? Drake's sells "organic" rum. Okay. I can make organic rum with no effort at all on my stove, just use cane sugar and some molasses, which I will also make from cane sugar. There is no worry about my rum not being certified organic because there is no GMO equivalent for either of those products. Non-GMO Project will happily sell me a label if I send them a check. Just like they did Drake's. 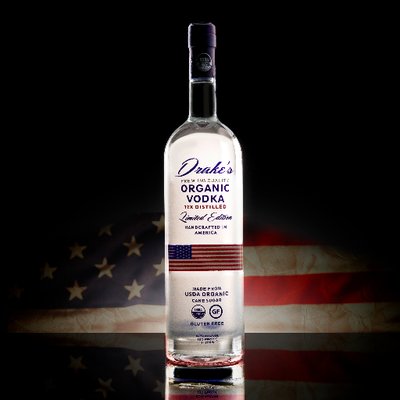 There is no gluten in molasses, or in rum, or any vodka made from sugar. So while the argument by corporate marketing departments is always that it's important for gluten-free to be listed as a health claim, it is insulting to celiac patients to pretend they are too stupid to know what has gluten in it and only corporate marketing departments keep them from being poisoned. Just say your vodka is made from sugar, not wheat, don't try to sell a "nocebo" to the public and pretend it is to save celiacs. They are guaranteed to know more than booze makers about their own disease.

Drake’s is the first and only spirit line in the world to be certified USDA Organic, Vegan, Non-GMO Project Verified, Gluten-Free and Kosher.

Their wording is very clever, it suggests a health benefit without actually laying claim to one, which would get them in trouble with Treasury Department's TTB. However this last part may still get them in legal hot water (bold mine):

“The right mix makes a good cocktail great,” said Drake’s founder and CEO Mark Anderson. “Drake’s Organic Mixes are convenient, healthier and delicious. Organic products taste better and are better for our planet and bodies. Our spirits and mixes are no exception.”

Your "organic" spirits are a class 1 carcinogen, a toxic chemical. There is no healthy form of rum or vodka. And it is certainly not going to cause less cancer, disease, ruined lives, or car accidents if the vodka has an organic sticker on it. It is also not better for the planet, since every study has shown the organic process uses more toxic chemicals and requires more land, which means more environmental stress.

It's not the first time Anderson has stepped over the ethical line in his quest to boost revenue. Last year he told a journalist, "If you’re going to have a healthier lifestyle and have an adult beverage, you’re probably going to mix a healthy organic vodka with a healthy organic beverage.”

There is no positive health certification for alcohol. Not one. Certainly not five. Implying there is means their CEO is putting his lust for dollars above your health sense.

(1) On organic, President Clinton’s Secretary of Agriculture, Dan Glickman, specifically noted when he approved the first "organic" label. "Let me be clear about one thing. The organic label is a marketing tool. It is not a statement about food safety, nor is 'organic' a value judgment about nutrition or quality.”

(2) Before they quickly recanted in response to my article and said they didn't think that GMOs were unhealthy at all, nor was their vodka healthy because the corn they use is not GMO corn.

“Smirnoff is not claiming that GMO ingredients are a health concern, nor is it claiming that vodka, or Smirnoff No. 21, is healthy.” - source
Science 2.0
More Articles All Articles
About