College Enrollment Will Go Down This Decade, And That's Probably A Good Thing
By Hank Campbell | December 28th 2020 08:12 AM | Print | E-mail

Hank Campbell
If you sell hot dogs at a baseball stadium, you probably do well in revenue. Now imagine the stadium puts 6 hot dog competitors next to you. Will you still do well or will your hot dog revenue go down? Unless you are Paul Krugman you know the price will go down. Now imagine the stadium tells you 6 people just like you doing the same job is a positive thing; more people will enjoy hot dogs and the market for hot dogs will probably grow because there are so many choices.

That may be true, yet it does not help you one bit.

This is the plight of new Ph.D.s who discover that a large part of the reason they got the Ph.D., to do research at a university, is going to involve a challenge few told them about. The university does not mention that while they are extolling academic life over icky corporate work that they are producing 6 times more Ph.D.s than can be employed in academia.

In 2010 I began to worry that government science funding agencies spending science funding to advertise how much you should want to stay in school and compete for government science funding was showing effects; 5,000 Ph.D.s were working as janitors. That needs some context. If you got a Ph.D. in 18th century French poetry, and you have any kind of actual literacy, you know gainful employment in your field may take longer. There aren't that many jobs out there. Yet this was impacting scientists also. Due to the glut in PhDs, post-doctoral researcher drifted down, some positions became unpaid. Some even only offered them if you brought your own grant.

We don't need need more criticisms of criticisms of Proust but we always need more science Ph.D.s, right? Not if they are going to work as bartenders, and not at the expense of them becoming doctors or other professionals. And that has been a problem; we weren't creating new Ph.D.s in science from people who might otherwise sell mobile phones, we were often cannibalizing smart people from other fields. Or we were encouraging people who would've been better off in the private sector to go to graduate school, where by age 40 and after three poorly-paying post-doc jobs they have lower quality of life than friends who got bachelor's degrees.

I've written about the Ph.D. bubble since then and universities are still saddling young people with monstrous debt to pay celebrity economists like Robert Reich hundreds of thousands of dollars per year to teach two hours a week. This "propaganda of higher-education apologists", as Richard Vedder at the Chronicle phrased it, is the cause of runaway student loans. In the late 1980s, politicians saw statistics showing that college education led to higher lifetime earnings and vowed that college education should be a 'right.' So they made student loans unlimited. You no longer needed to get a scholarship, work your way through, or have parents who could afford it. By 2010, a whopping 21,000,000 were enrolled in college, most of it financed by debt.

What had also happened was entirely predictable in a subsidized field; universities found ways to take more of the increased money.

According to the National Center for Education Statistics, the average cost just for a bachelor's degree is now over $112,000. When Congress decided a college education should be a 'right' and made student loans unlimited the cost was under $27,000. That is $53,000 adjusted for inflation so it basically doubled. Not a huge problem over decades, the price of cars in California went up a lot more than that in the same period. It's really less than 3 percent per year and not so bad. 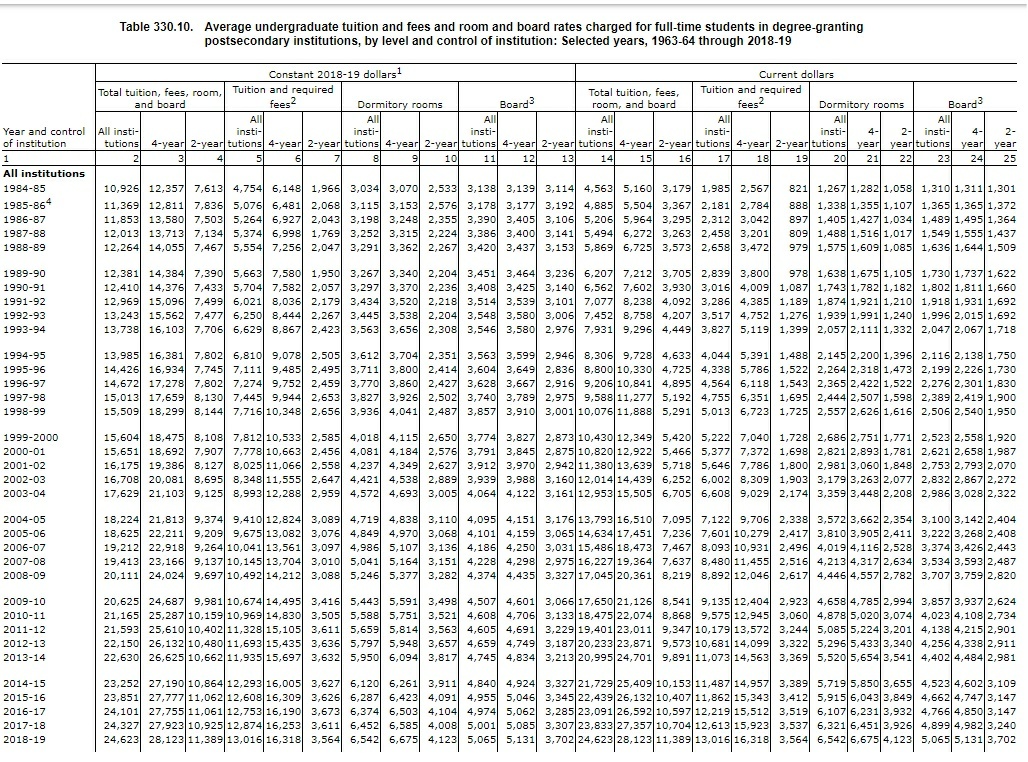 Except Federal Reserve Bank data show the average annual growth in wages during that time was only ~0.4 percent, even with the big increases that came during the first years of the Trump administration. So the cost of higher education has risen 7X what wages have, and all that debt was for nothing.

Academia used to be a labor of love but now the average professor makes $120,000 per year - scientists much more than that, even if they are sitting in a foreign prison. At rich schools like Columbia the average is $260,000. That's a great income and worth the student loan debt if you are an undergraduate and are truly committed to getting a tenure job. Yet with 6X as many Ph.D.s as there are jobs, getting a tenured position is a real challenge; the average age for an initial R01 grant is now over 40. I am not saying you shouldn't go for it if you want that, I want the best minds competing to do basic research just like I want the best in anything competing, but a glut in people means the best minds often won't win; someone cheaper and 'good enough' will.

And if student loan debt is forgiven, as the incoming administration has vowed it will be, there will be a consolidation not seen since the 1980s; because all of the old expenses in the university system will remain. All those student-loan-debt buildings, all of those salaries. Those costs can't go down, so the only place it will go down is in wages for graduate assistants and adjunct professors. It's like a stadium adding in hot dog vendors to compete for the same pool of customers, yet guaranteeing the salaries of the first vendor there - and then deciding hot dogs should be free.

In the current 10-year data available, young people with at least a bachelor’s degree had increased from 31 to 37 percent. That sounds great, if a degree means someone is smarter, or at least better off. Yet wages show they are neither. That is being corrected. Most recent data among younger people show a 6 percent decrease in students getting a college degree. Even with population increases and a large 'non-traditional' (over 18-24) age group getting degrees, we won't see a return to 2010 levels of degrees until perhaps 2030.

That's a good thing. It means young people are engaging in critical thinking about their futures, exactly what we want future leaders to do. And critical thinking says that at current cost levels, a college education may be a bad investment for hundreds of thousands of young people.
Science 2.0
More Articles All Articles
About