Most Don't Need Social Authoritarianism When It Comes To The Environment, Asking Works Just As Well
By Hank Campbell | February 11th 2021 11:37 AM | Print | E-mail

Hank Campbell
If a tourist doesn't know messing around with a coral reef is bad, they may try to touch them or pet turtles, but after being told by someone local that it has risks for the nature they are there to see they far less likely to do so.

A new paper found that such "nudges" works well. Which would mean we often don't need government 'ignore of the law is no excuse' type shaming policies to change behavior.

Obviously laws have to exist for a reason also. All of the public service announcements about dead people didn't keep morons from drinking and driving, or west coast elites from refusing to vaccinate their children(1), but tourists visit places because they have heard good things, they are not out to ruin well-regarded locales. In that instance, heavy-handed tactics may work in the short term, but could lead to resentment and rebellion when no one is around. Positive approaches like informative nudges stick.
The new findings on the "knowledge-action gap" was field experiments using observations of tourists visiting the archipelago island of Gili Trawangan, in Indonesia. It found what you might expect; given no behavioral cues or messaging, people might try to pet a turtle they see around a reef but when 'nudged' towards the desirable action, look but don't touch, with either a written or personal message it was enough to lead people to make environmentally conscious decisions. 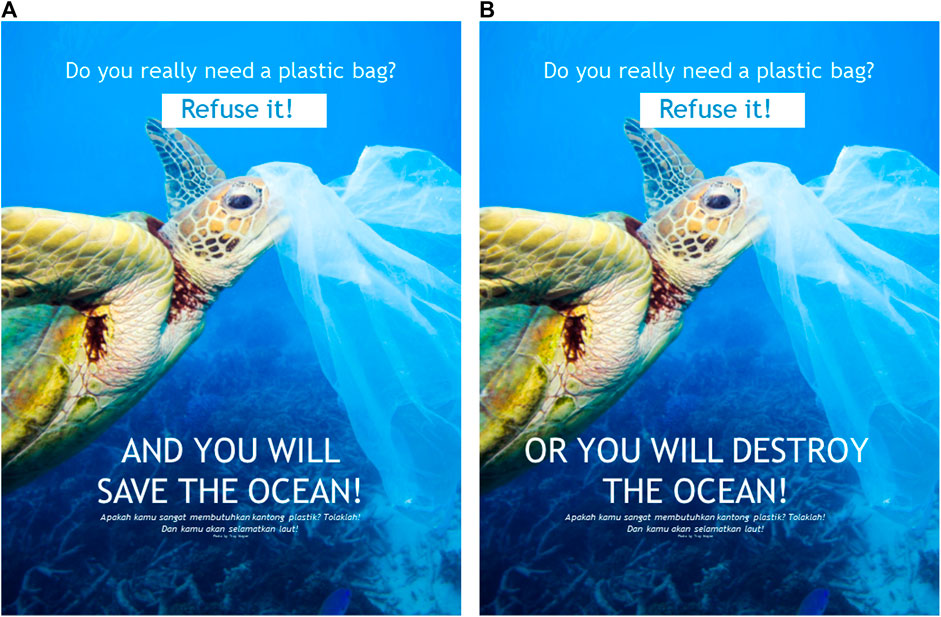 Positively (left) and negatively (right) framed signs. As a science nonprofit we can confirm that while the left works for educating people, when it comes to raising money, the right is the norm. That is why environmental law groups have 200,000% of the revenue of science media nonprofits.

Negative approaches also worked - when tourists know people are looking - but character is what you do when no one is around. So positive approaches would likely have the best long term impact. Californians are ridiculing that the plastic bag ban government implemented - a mandate and subsidy for cloth bag vendors - was thrown out the first time public health was important. During the COVID-19 pandemic government immediately brought back was plastic bags and made those mandatory. Because science showed few ever wash reusable bags while plastic bags get re-purposed in fine ways, but not for food. Government had not changed behavior in a positive way, they listened to environmental lobbyists whose companies get donations from cloth bag companies. Few one objected to having plastic bags again.

And that may be what happens if people are preached at that X will cause Y but are not convinced it is real.

Antifa or those knuckleheads who invaded the Capitol building aside, people are basically good. Everyone cares about the environment. Find a global warming denier and you will still find someone who conserves energy and uses a recycling bin. They were swayed by messaging. Were they swayed by that crying Italian actor pretending to be a Native American? I bet they were, but that was negative imagery, and it still did the job for a whole generation.

(1) On surveys, no one will say they want to ruin a coral reef but they may not know touching them can cause damage. This is why surveys are generally useless when it comes to behavior. When a giant swath of progressives on the west coast were refusing to give their children vaccines - some schools had over 70 percent unvaccinated kids- they were not admitting to being anti-vaccine on surveys; they framed it as a pro-choice decision. In that instance, anti-vax behavior was too ingrained, too many of their neighbors felt the same, and California had to pass a law to stop Marin, San Francisco, and Los Angeles from spreading disease. It is clear that they won't need a mandate for the COVID-19 vaccine, since so many wealthy elites are paying to jump in line.

But they also needed a law to stop them from risking harm to their children, and even after it was passed they began paying pediatricians that word spread would give them a "medical" exemption, and the same goes for the few who will damage the environment even if nudged not to do so. Some moron will always try to climb up on Stonehenge.
Science 2.0
More Articles All Articles
About