Hank Campbell
There are more women getting degrees in the life science, social science, and pre-med fields, while more men graduate in engineering and physics. Some contend that is gender bias introduced at a young age, but since education is 70 percent women it is difficult to charge them with sexism against females.

Regardless of why, whether it is just that women prefer fields like medicine, where they can help people instead of doing theoretical physics, the data show fewer women than men get degrees in overall Science, Technology, Engineering, and Math (STEM) fields.

Recent survey results published in Sociology of Education found that gender differences in high school students' occupational plans - the jobs they want to have at age 30 - were a lot more indicative of desire to go into STEM fields than grades, test scores, and classes taken. Ability and classes taken accounted for only a small difference between female and male STEM majors. Even if young women were great in math and science, they didn't want to do it as a career. That's not a problem, we don't want to tell smart people who want to be doctors to be engineers instead. But differences in career goals will cause disparities in STEM just like there are disparities in anthropology and education, where men have far less representation. 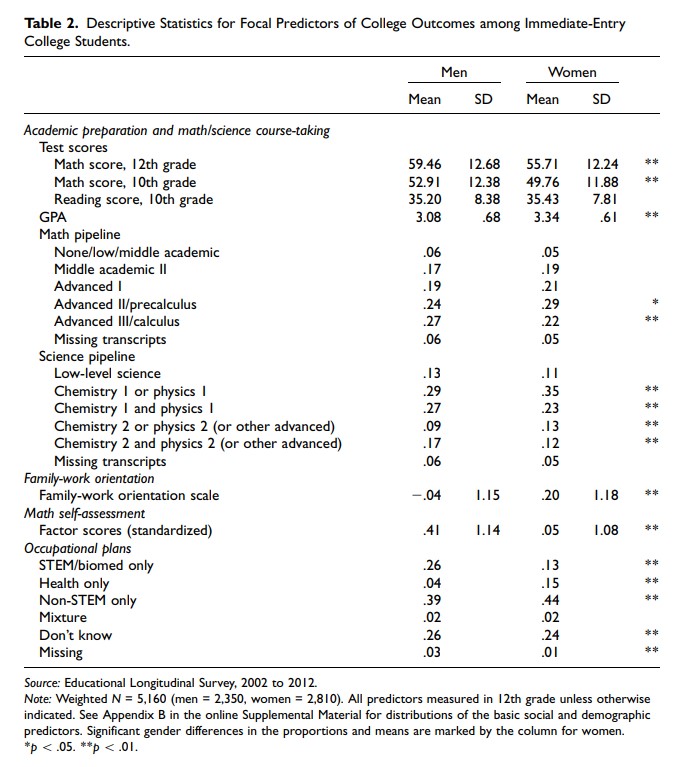 Data were out of the U.S. Department of Education's Educational Longitudinal Surveys (ELS), which from 2002 to 2012 tracked high school sophomores. High school senior boys wanted to go into STEM or a medical field 26 percent of the time while 13 percent of girls did. Yet 15 percent of girls planned to enter health occupations compared with 4 percent of boys, which affirms other results showing that more women are inclined to want to actually help people rather than study fruit flies or write speculation about the multiverse.

Among college sophomores who declared STEM majors, over 58 percent of men completed their degree while just over 42 percent of women did.

What does that tell us? Not much. Like astrologers, people will glean conclusions that match what some want to hear. The fact is that differences persist, but that won't help with solutions and it is unclear if there need to be. We need not be worried there are fewer men in biology, nor should we be worried there are fewer women in high-energy physics. As long as no one is being blocked out, or treated as if they don't belong for reasons outside ability, the system works. It is impossible to mandate parity, and academics wouldn't like it if universities did.  The real lack of inclusion is cultural. Though women are slightly under-represented in STEM, it's Republicans and handicapped people who are rarely found in faculty jobs. I would challenge any university department to agree that 44 percent of their faculty should be fired and replaced with Republicans to create true representation.

"Gender differences in academic achievement in high school and in work-family orientation are 'zombie explanations': They refuse to die, no matter how weak the empirical evidence for them," says Professor Kim Weeden of Cornell University, director of the Center for the Study of Inequality.

They don't die but they are dramatically different arguments. No one believes women can't do math, Larry Summers got fired from his job running Harvard for even suggesting there could be a scientific reason for less female representation in math, but work-family balance has merit. A woman is still the sex giving birth, and the private sector is a lot better about work-life balance than academia. Lots of female doctors do both, as do many in business. But a lab in a university is a really small business; often 5-6 employees. That makes it difficult to achieve work-life balance and younger scholars who are smart enough to do anything they want may hear those stories and choose something else.

Only 18 percent of men complete STEM majors, which means four out of five don't want anything to do with it. It's not easy, and it's not for everyone. As long as smart people are doing something to benefit society, be it medicine or math, we'll continued to lead the world in adult science literacy. And all boats rise when that tide is high.
Science 2.0
More Articles All Articles
About