Terahertz Band - 6G Cell Service Has Science Obstacles That Can Be Overcome, But Cultural Ones May Be Insurmountable
By Hank Campbell | June 14th 2021 10:06 AM | Print | E-mail

Hank Campbell
There are lots of advertisements for 5G cellular service but it still isn't available in most places, and devices that take advantage of it are in relatively low use. Better quality cat videos on a 5-inch screen are not all that compelling

Sooner rather than later, people are going to want the haptic internet - a virtual reality tactile experience far more advanced than a vibrating Xbox controller - and businesses will want holographic conferencing and both will require more mobile edge computing - mini-clouds closer to users than current centralized storage.

Those will require the next evolution in the terahertz band - 6G. It is blocked out to be from 95 GHz to 3 THz. 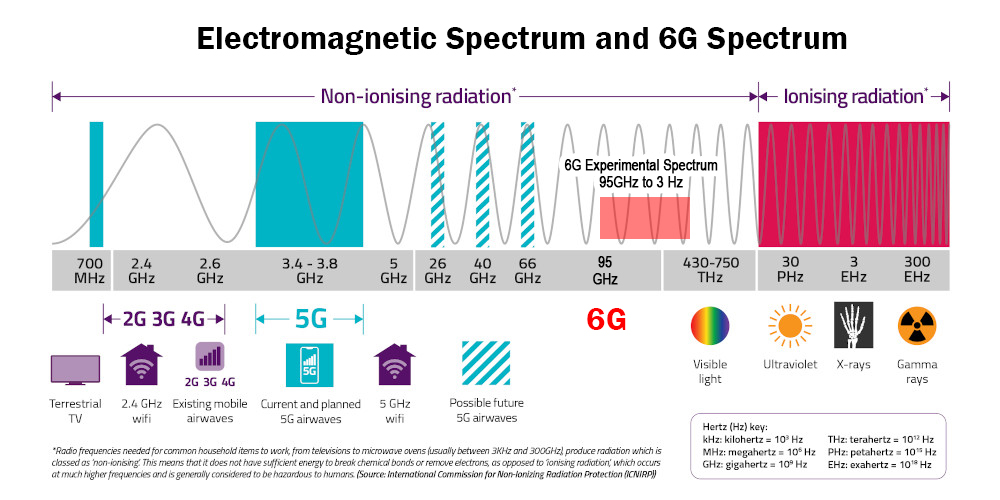 There are challenges., but the science and engineering challenges aren't as daunting as they seem right now, according to a new paper.

Older people in the physics and engineering industries certainly get that. When I was a young man and home computers were still in 'processor doubling every 18 months' mode, the crippling barricade was really the 100 MHz bus on a PC. It was fine to get chip clocks at whatever was achievable, but data was going to be an issue because a 100 MHz bus - the connection - was going to interfere with - and be interfered with by - a whole bunch of other products already in use, from radios to fluorescent lights to telephones.

It was solved because it had to be solved. PCs were big business.

Yet that issue - 6G does not need to be solved - may be what holds it back.

1. Higher frequencies mean worse wall penetration, as anyone who went back to their 2.4 Gigahertz network from 5 in their house will tell you. So many devices compete at 2.4 that it would be great to move from the 3 available channels at 2.4 to the 23 channels at 5 GHz but people want convenience, not to have to stand in a specific location to get a good signal.

2. Current batteries are not up to the challenge. There hasn't been an important breakthrough in batteries in 30 years, and it shows. Just like the best covered wagon was developed well after cars became popular, engineers are eking out better performance from legacy technology but companies have no reason to improve when government subsidizes and mandates current electric cars.

Just like a phone goes into power saving mode when battery is draining fast now, in the future that will mean power-hungry 6G will be the first to go. Even now, 5G phones will become more common in the next few years, as people replace their existing phones, but it is not going to really be 5G most of the time. The newer chips require more energy but for now batteries are the same old stuff.

3. Anti-science myths travel around the world before the truth can put on its pants. In a world where activists can convince the public neonic crop protection products are killing bees when bees are at record numbers, and naturopaths can convince people food that uses certified organic pesticides will prevent cancer, it is no surprise that people think light bulbs can cause brain cancer. Well, they don't really think that, but when the same energy as a light bulb is called 5G radiation they do. Even in my town - an Intel town - there were concerns about 5G towers going up.

Approaching terahertz speed, that short wavelength means blazing speed - but it is truly short. And it is not going through a tree or a wall, just like sunlight does not go through either of those.

This means a lot more 'towers.' It may even mean that each device has to be both a receiver and a transmitter.  Whoever the Robert F. Kennedy, Jr. is of the future will surely try to claim that 6G is harming us, and people are removed enough from science that they'll fall for claims that non-ionizing radiation will turn them into The Hulk.

These issues can be overcome. When the John Bull steam engine was to be rolled out for a passenger train, there was concern that humans had never gone that fast. So they tested it on dogs first. That may sound silly now, but even in the 1970s activists promoted the same fear about the Concorde SST airplane flying too fast for many humans to endure. A decade ago some still worried that cell phones caused brain cancer despite there being no greater instances of brain cancer but a lot more cell phones.

It takes patience and science outreach, which is what we do best at Science 2.0, so if you are inclined to help please donate.
Science 2.0
More Articles All Articles
About