Hank Campbell
Epidemiology pushes out a lot of dumb papers. Not as many as social psychology per capita but in volume a whole lot more. It's easy to see why the public believes horse de-wormer cures COVID-19, it was in an epidemiology paper, and that methodology was just as valid as a paper this week 'linking' olive oil to longer life.

But neither of those is as bad as the half-baked correlation mixed with supernatural beliefs in unsubstantiated epigenetics to say something so dumb last week that I don't even feel mean ridiculing it. The worst epidemiology paper (well, the worst that got corporate media attention) I read claims that you may be fat because your grandmother smoked cigarettes - before age 13. I felt my IQ drop in real time seeing such data dredged dreck. It is worrisome at a time when we need the public to trust the science that is helping reduce deaths from COVID-19.

Epidemiology has produced a lot of bad papers this century. Though they were once a legendary group, today if you are a trial lawyer and want to sue over a weedkiller an IARC epidemiologist is there to help. An IARC epidemiologist will even sign an expert witness contract for your lawsuit before their results are published and few in epidemiology find that odd or object. Want to believe a vegetarian diet leads to worse grades in school? Epidemiology is the way to go. The field that was once so evidence-based and conservative they were last to accept a genetic risk of cancer is now so rife with nonsense that a comical website was even created to throw spurious correlation together. If you are one of those California anti-vaccine people because a British kook used epidemiology to claim vaccines cause autism, you won't like that autism is also linked to organic food.

But your grandparents' dumb habits made you fat? That is truly special. There is no plausible biological mechanism for how, beyond the deus ex machina of epigenetics mixed in with statistical suggestion. People who started smoking at 12 are also more likely to do drugs and be obese and get COVID-19, do we blame smoking for those two generations later? Scientifically, it is nonsense.

We can't be too mean about people of the past, because you can bet 50 years from now pundits will be laughing that our supposedly best health experts (if you believe the best go into government, anyway) claimed pulling cloth masks up and down between sips of water on an airplane prevented disease spread - or that taking off your shoes in the airport before you get on the plane prevents terrorism. Yet we bought it because we don't want to be called science deniers or, worse, Republicans by talking heads on Twitter. 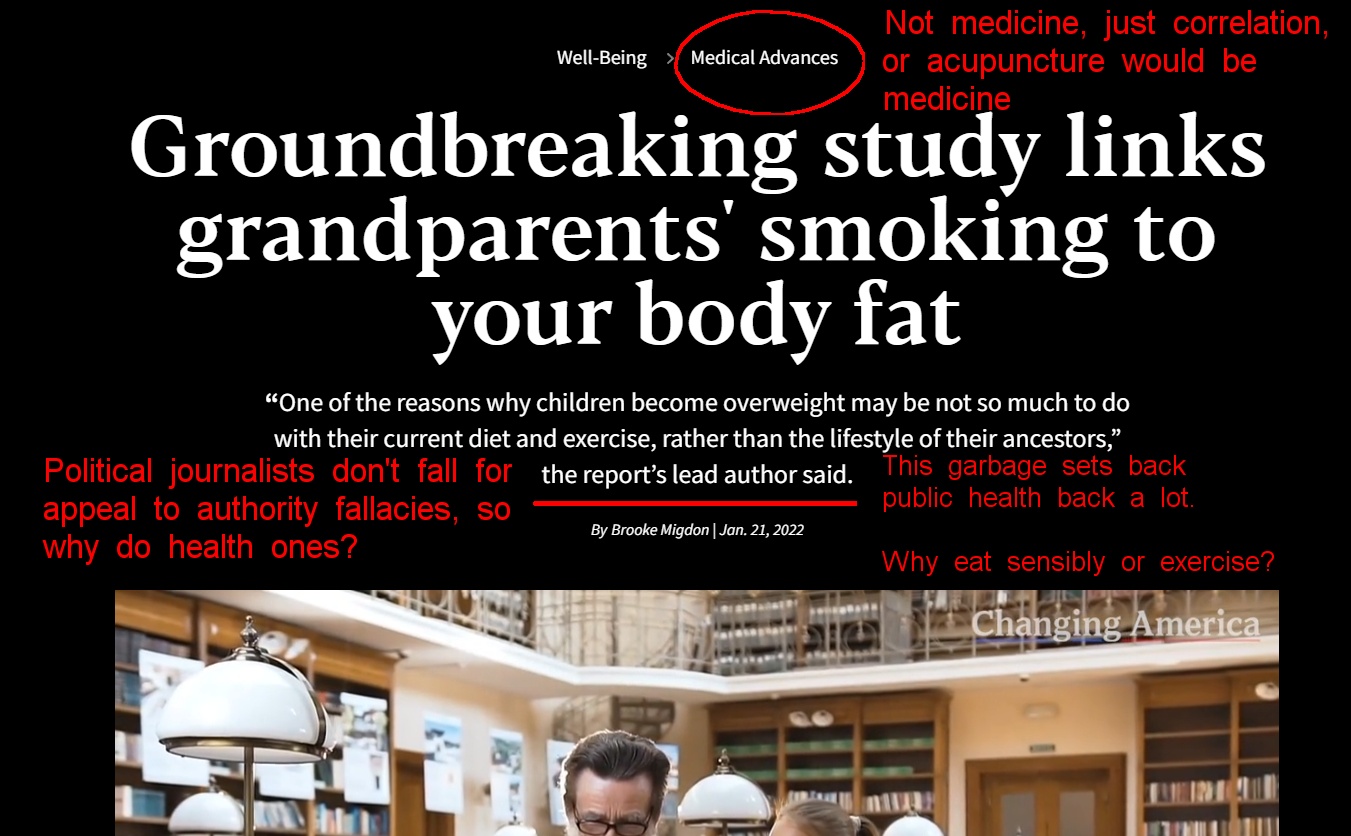 Smoking was known to be harmful by the 1960s but it was dismissed because it was just epidemiology. Obviously it had to be, because we can't do clinical trials on dead people but that was a much different epidemiology than the garbage fire Food Frequency Questionnaires enabled by the statistical significance fetish. The irony is that epidemiology showed smoking causes cancer but its newfound legitimacy due to that led to a rush of people entering the field and they all wanted to find the next smoking gun. So sketchy outfits like Harvard School of Public Health began linking every food and chemical to some benefit or harm. Then in 2010 the U.S. taxpayer-funded National Institute of Environmental Health Sciences well full-on crackpot, embracing the dangerous activist nonsense that has made anti-vaccine sentiment common among the left and now, with COVID-19, among the right also.

An anti-vaccine movement that used to be mostly wealthy progressives in California is now so bipartisan that Republicans cheer Robert F. Kennedy, Jr. when he claims Anne Frank - the Dutch girl murdered during the Nazi regime - had it easier than Americans do because cell phones are everywhere.

So we need to push back and use the same critical thinking academics and other Democrats usually only reserve for when Republicans cite a paper and criticize claims that your eating too much is not why you are fat, or sitting on your phone for 8 hours a day, but rather because your ancestors smoked cigarettes. Talk about exculpatory!

Unfortunately it is also complete nonsense and if we want the world to get better in 2022, coronavirus and beyond, it is time for credible epidemiologists to take a stand against gibberish wrapping itself in the flag of science.
Science 2.0
More Articles All Articles
About