The Next Generation Of Parents May Think It's Normal To Let Kids Play Outside Again
By Hank Campbell | March 6th 2019 04:34 PM | Print | E-mail

Hank Campbell
Two generations ago, it was normal for kids to play out on the street. But trust in media was high then and sensationalized accounts of kidnappings and white vans and accidents led to helicopter parents worried that their children would be kidnapped.(1) Today, unless there is an organized play date scheduled well in advance, kids are likely to stay indoors. Sports will cause concussions, after all.

That has led to kids being isolated and often obese.

It may be starting to change. The Mommy Blogger (2) culture that has led to bizarre surges in organic food, the anti-vaccine movement, and the notion that any stranger who talks to them is a sexual predator, has its antipode in the backlash against living in a fear state about kids being outdoors. In the US hat has led to efforts like Let Grow, where some parents even allow children to take the subway without an armed phalanx, and in the UK they have Playing Out.

In Cities  &  Health, Alice Ferguson writes about why she and a friend decided to let their kids play out in the streets like she did as a child. She notes they liked the idea of implicit physical activity, when kids are playing they don't think they are exercising, and that she remembered it developed social skills, important because then parents did not abdicate so much personality development to school systems and the Internet. 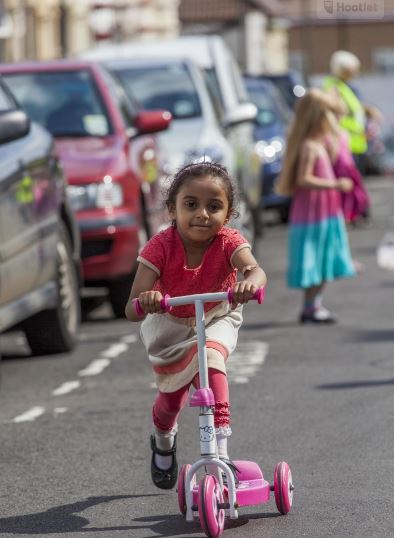 In my neighborhood it would likely mean kids on their phones outside the first few times, and it was probably also an adjustment for the parents at first; they were still so hesitant they felt the need to go to the city council and get a road closed in order to create a play street (when I was a kid we just got off the street when a car came by) but then it became popular so the city council made it easier to close streets a year in advance.  And then it spread to nearly 60 other areas where Ferguson estimates it's creating physical activity and maybe some old school independence for up to 24,000 children.

If that trend continues it may become so common that parents are not so worried about drivers they need government mandates to let kids out, and drivers again will become used to being more cautious when a kid and a ball are nearby.

There are other benefits outside the obvious. Since kids don't just spontaneously go to each other's houses or play outside as much as in the past, parents may not socialize as much with neighbors either. Kids could be doing a lot to develop social skills for their parents by going outside and meeting new people.

Ferguson recognizes there is no substitute for developing resilience, as happens when one kid is just outside kicking around a ball and then other kids join. Arguments occur, factions are created, disputes are settled. Just like in adult life. The phrase "take your ball and go home" is as meaningless to kids today as "rewind" or "hang up the phone" if they don't have a ball and interact with other people outside, but someone who will ruin things for everyone if they don't get their way is an important trait to recognize in later years.

But these are still organized playdates and Ferguson recognizes that is an interim step. "We only ever intended this model as an interim, emergency measure. Being able to play out on your own street once a week or once a month, closely supervised by adults, is a poor replacement for 'real' playing out; the freedom to just go out your front door, meet up with your mates, have an adventure and come home when dinner is ready. Our long-term vision is for all children to have the freedom to play out where they live, every day."

She says cars are obstacle in just letting kids go outside but that is not true. We created that myth also, by letting media hijack common sense about the tiny relative risks of letting kids be kids, and forgetting all the rewards from our youth. When more kids are on the streets, people do drive more carefully. Your neighbors are not The Other who lack our moral compass about running over children, they are probably decent people who will be even more careful if they know the children in their neighborhood and see them playing outside often.

(1) There are about 100 abductions per year by strangers. While that is more than will be killed by cows (around 25 per year), about 600 adults will be shot on Thanksgiving alone. So if you don't think your odds of being murdered on Thanksgiving are all that worrisome, take comfort that the odds of that happening are still 2000X greater than your child being kidnapped while they're out of sight.
Science 2.0
More Articles All Articles
About