Hank Campbell
When is it right to turn over 5 million acres of public land for exploitation by energy corporations?

Then it was time for lawsuits.

If the history of using federal lands for energy is any indication, environmentalists approve of it when the politician behind it is in their tribe. Especially if it looks like they can win a "sue and settle" case and get paid a handsome sum.

In 2013, with ethanol already in use, the Obama administration added fracking to its list of energy exploitation allowed on public lands. The lawyers at Center for Biological Diversity, a litigation group, sued, and a judge said the Obama's Bureau of Land Management had to do more environmental impact studies.  So Obama lost and California and environmentalists won, right? It's politics, nothing is ever what it appears. While publicly being critical of fracking, California government worked for it with the Obama administration behind the scenes. Fracking means high-paying union jobs and Texas, Oklahoma and North Dakota were booming while the rest of the country remained mired in recession. California, with $500 billion in unfunded liabilities, wanted more revenue. 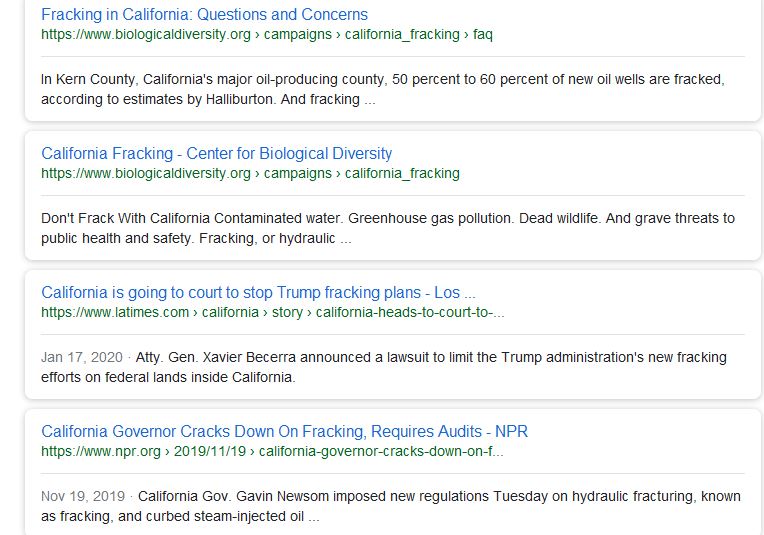 Journalists and lawyer groups like Center for Biological Diversity are rushing to claim (perhaps they even believe it) that California government is concerned about natural gas, but with $500 billion in liabilities, rampant unemployment, and a severe depression due to the coronavirus lockdown, government is secretly cheering that the court lifted the moratorium on fracking last week. Nearly 700 wells will now be paying taxes on local energy in addition to consumers paying the highest utility rates in the country due to taxes.

While publicly cheering they were privately smarting from the decision - it meant more reliance on Texas and Alaska and other out-of-state energy producers - so the Obama administration offered to try again.

In 2015, they did. Bureau of Land Management created guidelines for environmental concerns and lawyers sued again. In 2016, U.S. District Judge Michael Fitzgerald put another roadblock in front of their desire to use public land for fracking, siding the same 'needs more study' tactic that had worked before. And won. Environmental groups got another check for 'court costs', which is the overwhelming source of income for almost all trial lawyers.

Yet they just lost to the Trump administration, in a California court that critics argue is "liberal."

It wasn't that the federal government changed out its career employees and they suddenly started arguing for real, it was environmental groups that changed. When it was a President they had campaigned for, they argued his administration's decisions 'need more study' and a judge would sign off on their "sue and settle" agreements and taxpayers would foot the bill for environmental lawyer bonuses while cases went to appeal and the process could be repeated again.

Yet with the Trump administration, a President from a party they oppose, they argued the government's behavior was "illegal" because it sought to get rid of unnecessary and burdensome regulations that were just the kind of chronic lawsuit bait that stymied progress.

"Illegal" is a much different case to prove. The Obama administration was great about pre-arranging settlements with environmental groups - and environmentalists kept their tone respectful because he was their guy. "Needs more study" was not a slam on Democrats. But with Trump they tried to suggest the federal government was violating the law in undoing a useless added layer of bureaucracy that didn't help the environment one bit.(2)

This additional layer of fracking regulations, agreed upon in secret meetings between the Obama administration and environmental lawyers, had a benefit for the Obama administration also. he had just wasted tens of billions of dollars subsidizing solar panel plants in the ridiculous belief that America could compete with $1 an hour Chinese labor.(3) The bankruptcies were a blight on his strategy. If natural gas became more expensive, then solar might look less awful in comparison.

Though the relationship looked combative to outsiders, the Obama administration was happy to add more layers of cost to an energy source it opposed and environmental groups were happy to keep suing and settling to help.

The world was surprised and a Republican won the White House in 2016 but environmental groups clearly took it personally. That is an uncommon error for lawyers but their tack changed to "illegal" when it was simply undoing the work of a previous administration that used no science. If an arbitrary positions was illegal to undo by the current administration, then it was illegal to implement. And the court did not find that to be true. Just like with an executive order, a President can do it, but they ain't Moses. Another President can undo it. President Obama undid lots of executive orders by his predecessor, often for show or to reward his allies, and Trump did the same thing.

Environmental lawyers failed spectacularly here. The judge sided with the government and against Sierra Club and its puppet arm, Earthjustice, using concussive force - a summary judgment against them on all grounds.

It's not over. Environmental lawyers know they can keep appealing until a President more friendly to their agenda gets into power and then it will be back to business as usual. But for now, it is a win for consumers, and the environment will not be harmed by even a virtual particle.

(1) They are always promoting alternatives so they can feel righteous in getting sue-and-settle payments in court arguing against what is working right now. If solar ever becomes viable, you can be sure they will discover all of the toxic chemicals in those panels that they ignore now.

(2) Useless bureaucracy is what got us the coronavirus crisis. A CDC that had become such a bloated job works program that it needed 6 weeks to tell us if lettuce had E. coli found itself completely unprepared for an actual pandemic.  They had employees writing about global warming and the rest were inventing epidemics, like the "pre-diabetes"  which baffled international diabetes organizations and every other government, and vaping, which baffled foreign health agencies that knew the harms of smoking.

They were so in love with their own bureaucracy and ability to impede progress they wouldn't even send a coronavirus test to UC Davis and told the hospital they first had to show the patient had coronavirus. When they finally sent test kits out, they had faulty reagents and were useless.

Exasperated by CDC's inability to do anything more than talk about statistical correlation, FDA began issuing emergency authorizations so independent groups that knew what they were doing could begin testing. Government learned it had to get out of the way.

Journalists dutifully tried to spin it that a Republican administration was the problem at CDC but it fell flat. Most of the CDC are career government employees, they are union members, they are the group that like government. In other words, they are almost all Democrats. If they make things complex for everyone else, they remain important.

(3) New York did the same thing as DC in the Obama days. In 2015, state infectious disease experts, worried after the SARS and MERS coronavirus pandemics, plus H1N1 and ongoing concerns about influenza, asked Governor Andrew Cuomo for 16,000 additional ventilators. His government refused. What did get funding was a solar panel plant run by a political donor, a subsidy of nearrly $600,000,000.
Science 2.0
More Articles All Articles
About