Withania somnifera (Ashwaganda) is one of the most valued medicinal plant in Ayurveda
By Ashwani Kumar | May 27th 2012 03:36 AM | Print | E-mail

Ashwani Kumar
Withania somnifera is one of the most valued medicinal plant in Ayurveda and other traditional systems of medicine (Shivani and Kumar, 2000). In Ayurveda, W. somnifera is regarded as one of the most useful herbs having ‘Vata’ pacifying properties (Singh and Kumar, 1998 and Singh et al., 2001). In recent times, it has attracted tremendous pharmacological research interests. The plant has been reported to have adaptogenic, anticancer, immunomodulatory, antioxidative and neurological effects (Schliebs et al., 1973; Ray and Gupta, 1994 and Dhuley, 2001). It is also considered efficacious in the treatment of arthritis, behavioural and stress- related problems (Kulkarni et al., 1992). Thirty-three crude extracts from 9 Ethiopian medicinal plants were tested for antimalarial activity against chloroquine-resistant Plasmodium falciparum (strain FCM-29) in vitro. The measurement of radiolabelled hypoxanthine incorporation by the parasite was used to assess inhibition of parasite growth. The chloroform and methanol extracts of leaves of W. somnifera showed substantial antimalarial activity. 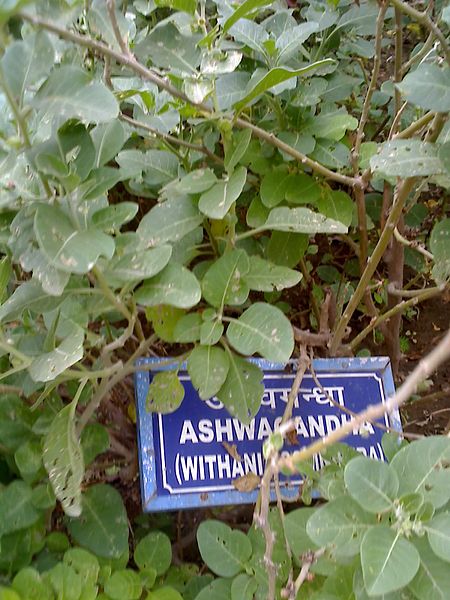 Ashwagandha is one of the most widespread tranquillisers used in India, where it holds a position of importance similar to ginseng in China (Bown, 1995). It acts mainly on the reproductive and nervous systems, having a rejuvenative effect on the body, and is used to improve vitality and aid recovery after chronic illness (Bown, 1995 and Chevallier, 1996). Administration of an extract of W. somnifera was found to reduce two stage skin carcinogenesis induced by DMBA (dimethyl benzanthracene) and croton oil (Davis and Girija, 2001). Enzyme analysis of skin and liver showed significant enhancement in antioxidant enzymes such as GSH, GST, glutathione peroxides and catalases in W. somnifera treated group when compared with the control. The elevated level of lipid peroxide in the control group was significantly inhibited by W. somnifera administration. These studies indicate that W. somnifera could reduce the papilloma induced alterations to the antioxidant defense systems (Christina et al., 2004). Administration of an extract from the powdered root of the plant W. somnifera was found to stimulate immunological activity in mice. The results confirm the immunomodulatory activity of W. somnifera extract, which is a known immunomodulator in indigenous medicine. HPLC method for the determination of withaferin A and withanolide D was developed. The system was successfully used to investigate the presence of the markers in different W. somnifera plant parts as well as to analyze their content in market products (Ganzera et al., 1998). The aqueous suspension of Withania somnifera root powder was investigated for their in vivo and in vitro immunomodulatory properties. W. somnifera showed potent inhibitory activity towards the complement system, mitogen induced lymphocyte proliferation and delayed-type hypersensitivity reaction. Our results report immunosuppressive effect of W. somnifera root powder, thus it could be a candidate for developing as an immunosuppressive drug for the inflammatory diseases (Rasool and Varalakshmi, 2006). The whole plant, but especially the leaves and the root bark, are abortifacient, adaptogen, antibiotic, aphrodisiac, deobstruent, diuretic, narcotic, strongly sedative and tonic (Emboden, 1979 and Bown, 1995). Internally, it is used to tone the uterus after a miscarriage and also in treating post-partum difficulties (Emboden, 1979). It is also used to treat nervous exhaustion, debility, insomnia, wasting diseases, failure to thrive in children, impotence, infertility, multiple sclerosis etc (Bown, 1995). Externally it has been applied as a poultice to boils, swellings and other painful parts (Emboden, 1979 and Chopra, 1986). The root is harvested in the autumn and dried for later use (Bown, 1995). Some caution is advised in the use of this plant since it is toxic. The fruit is diuretic. The seed is diuretic and hypnotic (Bown, 1995). The fruit is rich in saponins and can be used as a soap substitute (Emboden, 1979). Bown (1995) worked out cultivation detail. A fairly easily grown plant, it requires a warm sheltered position in full sun and a well-drained moderately fertile soil. Prefers a dry stony soil.This species is not hardy in temperate climates but it can be grown as an annual, flowering and fruiting in its first year from seed. Propagation is through seed. There is usually a high germination rate within 2 weeks. Indian Ayurvedic tradition also has strong adaptogens, paticularly ashwagandha (Withania somnifera), also known as Indian ginseng, used for more than 3,000 years in indigenous medical systems for anti-inflammatory and astringent properties, as well as serving as a liver tonic, ashwagandha is being studied for a range of immune supportive properties. It may work as an immunoregulator, stimulating generation of cytotoxic T cells and decreasing stress-induced immunosuppression. Further research suggests it may inhibit autoimmunerelated inflammation and serves as an antimicrobial/antifungal. It is highly esteemed as a rasayana drug of Ayurveda, capable of imparting long life, youthful vigour and intellectual powers. The drug is a good tonic (Khan, 2006). Ali and Shuaib (1997) isolated five new withanolides, namely withasomnilide, withasomniferanolide, somniferanolide, somniferawithanolide and somniwithanolide from the stem bark of W. somnifera collected from the southern region of New Delhi. Withanolides are the most important bio-active constituents present in roots of ashwagandha. Withanolides are believed to account for the multiple medicinal applications of ashwagandha. These molecules are steroidal and bear a resemblance, both in their action and appearance, to the active constituents of Asian ginseng ( panax ginseng) known as ginsenosides. Withanolides, including glycosylated ones present in medicinal plants are reported to have antioxidant, immunomodulatory and other activities (Ghosal et al., 1989; Bhattacharya et al., 1997; Furmanowa, 2001; Matsuda et al., 2001 and Zhao et al., 2002). Some withanolides are known to have quinone reductase induction-mediated protective activity against chemical carcinogenesis (Misico, 2002). A variety of mono- and poly-herbal preparation are commercially sold in India. However, no phytochemically standardized pharmacoepial parameters are published for quality evaluation.
Humboldt Fellow and Science
More Articles All Articles
About

Professor Emeritus ,Former Head of the Department of Botany, and Director Life Sciences, University of Rajasthan, Jaipur. 302004, India At present...