News Staff
In 2006, a somewhat common yet unpredictable decline in bees occurred, just as had happened in previous decades and leading back as long as anecdotal records have been kept. While scientists tried to determine the cause, various constituents rushed to lay blame for this new short-term decline on various environmental factors. The science consensus was that it was parasites but while the investigation was ongoing, the European Union wanted to know if it was due to a newer class of pesticides, called neonicotinoids, that had been introduced as a safe alternative a decade earlier, due to a mass die-off of bees.

Bee numbers have rebounded nicely but the report says they are not out of the woods yet.

According to the background information in the Status and Trends of European Pollinators (STEP) report, pollination is helps 84% of European crops on some ecosystem level and 78% of temperate wildflowers needing biotic pollination. The authors also estimate that ~10% of the total economic value of European agricultural output for human food amounted to €22 billion in 2005 (€14.2 for the EU) was dependent upon insect pollination. 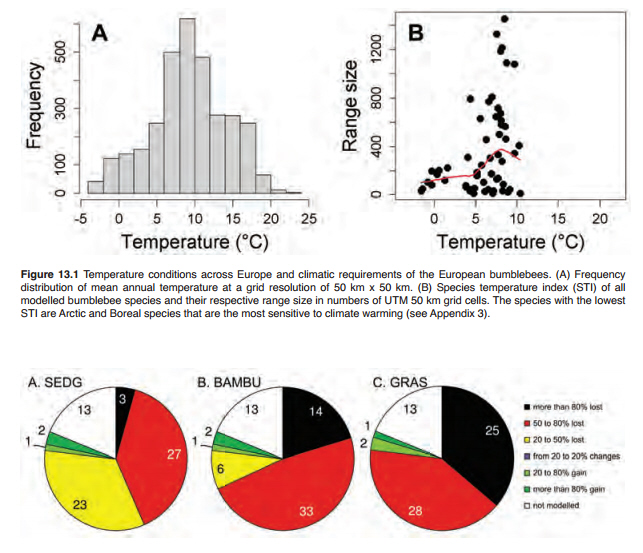 Though bee numbers have been on an upward trend overall since accurate records came into existence in the 1960s, in one region of Europe, bees did decline and the authors contend it is a 'cocktail' of environmental stressors which could threaten the entire EU in the future. They further believe that nature-based solutions are possible.

The cause is due to climate change, they write in "Climatic Risk and Distribution Atlas of European Bumblebees". The atlas provides what they believe is the most comprehensive evaluation of the likely consequences this will have.

To make their estimate, the authors from universities and environmental NGOs collated over one million bumblebee records provided from all over Europe. Based on these data, they modeled the current climatic niche for almost all European species (56 species) and projected future climatically suitable conditions using three climate change scenarios for the years 2050 and 2100.

Strong mitigation strategies are therefore needed to preserve this important species group and to ensure the sustainable provision of pollination services, to which they considerably contribute.

Professor Simon Potts of the University of Reading, Coordinator of STEP, said, "Europe's pollinators face many challenges if they are to continue to support food production and maintain the flower diversity of our landscapes. The STEP project has generated a substantial body of knowledge on how to conserve pollinators, safeguard the pollination of crops and better understand how mitigate against threats".