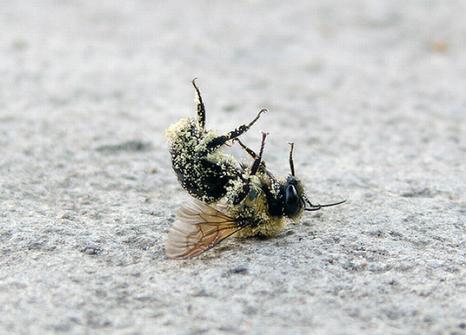 Researchers have discovered that a network of viruses usually associated with managed honeybees pose a widespread risk to bumblebees in the wild also.

The study revealed multiple interconnected diseases that are threatening several species of bumblebee and the managed honeybee, which are essential pollinators of many agricultural crops and wild flowers.  Previously research had only identified one virus, deformed wing virus, which had most likely spilled over from managed honeybees into wild bumblebee populations, and fluctuations in wild bees were attributed to pesticides by activist groups rather than the other viruses.

The research identified five viruses – black queen cell virus, deformed wing virus, acute bee paralysis virus, slow bee paralysis virus and sacbrood virus (all named for their effects in honeybees) - from wild bumblebees and managed honeybees at 26 sites across Great Britain. Some of these infection levels were highest in honeybees and for others they were higher in bumblebees. This suggests that some viruses are predominantly spread by honeybees, while others rely on wild bumblebees.

Professor Mark Brown, from the Department of Biological Sciences at Royal Holloway, University of London, said, "Our results confirm a recent review of potential threats to pollinators, indicating that so-called honey bee viruses are widespread in wild bees. It is imperative that we take the next step and identify how these viruses are transmitted among honeybees and wild bees, so that we can manage both to reduce their risk of disease."

Professor Robert Paxton, from Queen's University, Belfast, added, "Our previous research suggested that a key virus of the honeybee – deformed wing virus – spills over to infect bumble bees, probably via contact at flowers. We now find that other viruses may be doing the same. Yet our new findings also highlight just how little we know of bee parasites and the role they play in the decline of pollinators."

This study was funded by the Insect Pollinators Initiative, a joint venture of the UK's Biotechnology and Biological Sciences Research Council (BBSRC), Defra, the Natural Environment Research Council (NERC), the Scottish Government and the Wellcome Trust, managed under the auspices of the Living with Environmental Change (LWEC) partnership.

Article: 'A sting in the spit: widespread cross-infection of multiple RNA viruses across wild and managed bees' upcoming in the Journal of Animal Ecology.
News Articles
More Articles All Articles
About