Many large mammals went extinct at the end of the most recent Ice Age (about 11,000 years ago), including the Steppe bison, Bison priscus.

Recently an intact one was found, literally frozen in time. This most complete frozen mummy of the Steppe bison yet discovered dates to 9,300 years ago and was uncovered in the Yana-Indigirka Lowland.

The Yukagir bison mummy, as it is named, has a complete brain, heart, blood vessels and digestive system, although some organs have shrunk significantly over time. The necropsy of this unique mummy showed a relatively normal anatomy with no obvious cause of death. However, the lack of fat around abdomen of the animal makes researchers think that the animal may have died from starvation. 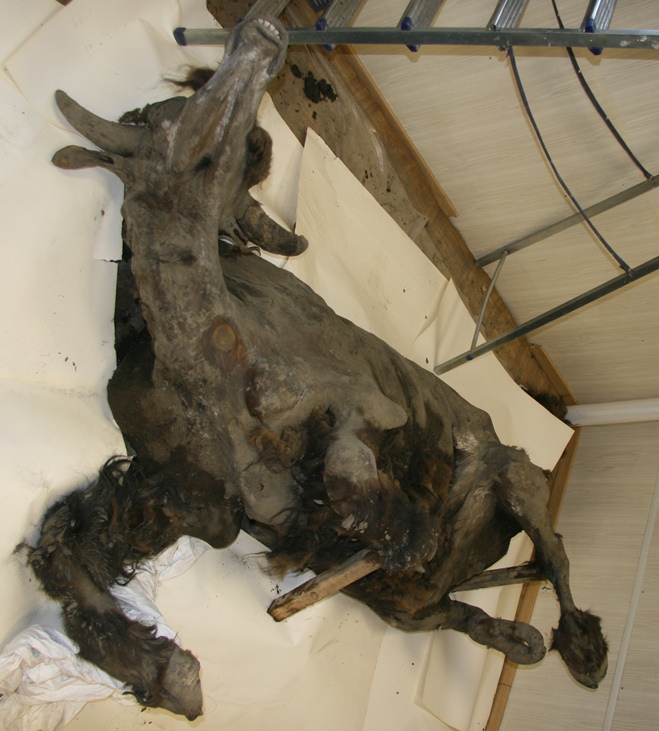 Yukagir bison mummy
found in 2010, a young ox age of about 4 years. Credit: Academy of Sciences of Republic of Sakha
The project is being led by Dr. Natalia Serduk of the Russian Academy of Sciences in Moscow, Russia with contributions from a large group of scientists mainly from Yakutsk and Moscow, Russia. One project scientist, Olga Potapova, from the Mammoth Site of Hot Springs in South Dakota, says, "The Yukagir bison mummy became the third find out of four now known complete mummies of this species discovered in the world, and one out of two adult specimens that are being kept preserved with internal organs and stored in frozen conditions", making this find one of high importance.

Dr. Evgeny Maschenko, another project scientist, from the Paleontological Institute in Moscow  comments, "The exclusively good preservation of the Yukagir bison mummy allows direct anatomical comparisons with modern species of Bison and cattle, as well as with extinct species of bison that were gone at the Pleistocene-Holocene boundary."

Frozen bison and mammoth mummies are changing the way we think about paleontology because of the large amount of information that can be ascertained from each specimen, with new scientific methods and approaches that became available within the last decade.

Potapova adds, "The next steps to be done include further examination of the bison's gross anatomy, and other detailed studies on its histology, parasites, and bones and teeth. We expect that the results of these studies will reveal not only the cause of death of this particular specimen, but also might shed light on the species behavior and causes of its extinction."