The iPhone 6 is apparently flexible, though that's a not a good thing; people are warping them when they sit down, and people without abnormal strength can simply twist them in their hands.

But that won't always be a design and construction defect. As tech company LG demonstrated this summer with the unveiling of its 18-inch flexible screen, the next generation of roll-up displays is tantalizingly close.

Researchers have reported a new, inexpensive and simple way to make transparent, flexible transistors — the building blocks of electronics — that could help bring roll-up smart phones with see-through displays and other bendable gadgets to consumers in just a few years. Maybe even in iPhone 10. 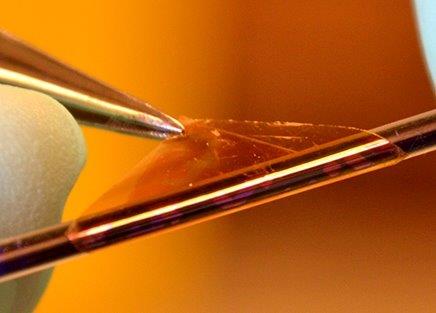 This transparent transistor, which functions even when wrapped around a thin pen, could help make flexible electronics widely accessible. Credit: American Chemical Society

Yang Yang and colleagues note in ACS Nano that transistors are traditionally made in a multi-step photolithography process, which uses light to print a pattern onto a glass or wafer. Not only is this approach costly, it also involves a number of toxic substances. Finding a greener, less-expensive alternative has been a challenge.

Recently, new processing techniques using metal oxide semiconductors have attracted attention, but the resulting devices are lacking in flexibility or other essential traits. Yang's team wanted to address these challenges.

The researchers developed inks that create patterns on ultrathin, transparent devices when exposed to light. This light sensitivity precludes the need for harsh substances or high temperatures.

"The main application of our transistors is for next-generation displays, like OLED or LCD displays," said Yang. "Our transistors are designed for simple manufacturing. We believe this is an important step toward making flexible electronics widely accessible."