During the short, dreary days of winter, some people feel tired and oversleep, they are depressed and irritable and have trouble concentrating.  But once spring arrives, they say they feel fine.

4 percent of the American public say they suffer from this seasonal affective disorder (SAD), a type of depression that occurs during the same season each year.

Biologists know that variations in the amount of sunlight a person receives and her or his circadian clock play a role in the disorder and some have proposed that the neurotransmitters serotonin and melatonin may be involved. However, they have not yet identified the underlying neurobiological mechanisms responsible. 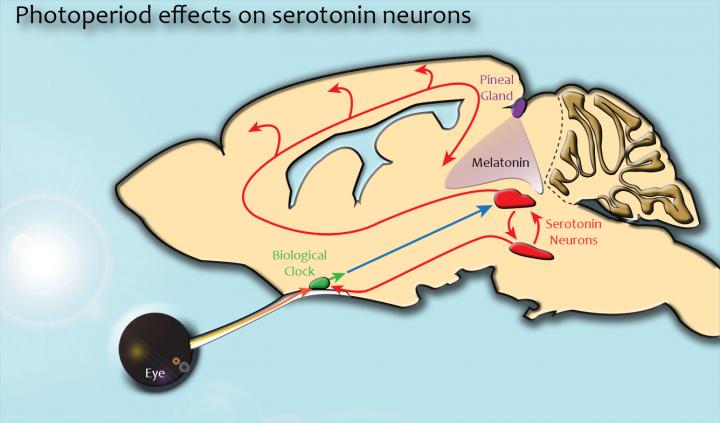 Illustration of the links between the brain's serotonin system, circadian clock and pineal gland which are involved in seasonal affective disorder, depression and other serious mood disorders. Courtesy of Chris Ciarleglio, Brown University

Researchers writing in Current Biology report that they have localized the seasonal light cycle effects that drive SAD to a small region in the mid-brain called the dorsal raphe nucleus in an experiment with mice, a common "animal model" for studying depression in humans.

In both mice and humans, the dorsal raphe nucleus is an area where many of the specialized neurons that control serotonin levels throughout the brain are located. Because high concentrations of serotonin are associated with feelings of well-being and happiness while low levels are linked to depression, it plays a major role in regulating an individual's mood. Their study also found that the day/night cycle in which individuals are born can have a long-lasting effect on the activity level of the neurons in this region.

"We got the idea for the study from a report by Viennese psychiatrists which found a season of birth correlation in SAD patients," said the study's lead author, Vanderbilt graduate student Noah Green.

The biologists decided to concentrate their investigation on the dorsal raphe nucleus because prior studies had shown that it is linked to the brain's master biological clock and it also responds to melatonin, a hormone that is involved in the regulation of a number of related physiological functions, including sleep, blood pressure and seasonal reproduction.

Scientists have developed a number of tests to determine whether mice are depressed or, more precisely, exhibit depression-like behavior. For example, one of these is a forced swim test, where the researchers put a mouse in a pool of water and measure how much time it spends struggling to get out and how much time it spends floating passively. They argue that a depressed mouse will spend less time struggling than a normal mouse. (Mice float so they aren't harmed when they stop paddling.)

Administering several of these tests, the researchers found that the summer-light-cycle mice exhibited lower levels of depression-like behavior than their spring/fall- or winter-light-cycle counterparts.

When the biologists examined the brains of individuals from the three groups, they found a story consistent with the behavioral testing. They found that serotonergic neurons fire faster in the summer-light-cycle mice and they had elevated levels of serotonin and the neurotransmitter norepinephrine, which is known to excite serotonergic neurons.

"Before, we thought serotonin was probably involved. Now we know that serotonergic neurons are definitely involved," said Vanderbilt's Stevenson Chair in Biological Sciences Douglas McMahon, who supervised the study.

Intriguingly, when mice born in summer light cycles were switched to winter light cycles the increased firing of serotonin neurons persisted for several months, into adulthood for the mice.

"This showed that early life seasonal photoperiods can have enduring effects on the serotonin neurons. If such an effect occurs in humans, and is long-lasting, it could contribute to the season of birth modulation of SAD risk," said McMahon.

The researchers also had an opportunity to test the role of melatonin. Normally, the hormone affects the serotonergic neurons in the raphe nucleus by binding to a special structure on the neurons' surface called melatonin receptor 1.

So the researchers got a strain of genetically engineered mice with melatonin receptor 1 "knocked out." Although the pineal glands in these mice worked normally, their serotonergic neurons couldn't respond to the melatonin because they lacked the proper receptors.

When they raised the knock-out mice in the three different photoperiods, the researchers found that the seasonal effect disappeared.