The world’s fastest 400-meter sprinter, Blake Leeper, was ruled ineligible to compete in the Tokyo Olympics due to having an assumed advantage, but a new study with the most comprehensive set of data ever collected from elite runners with bilateral leg amputations compared performance data from Leeper, South African “blade runner” Oscar Pistorius and other bilateral amputee sprinters with those of the best non-amputee sprinters in the world across five performance metrics and found no advantage.

For the study, Leeper, who was born without legs, visited  Alena Grabowski, associate professor of integrative physiology at CU Boulder at the Applied Biomechanics Lab for a series of tests in 2018. That summer, he had sprinted the 400-meter in 44.42 seconds, breaking the record of Pistorius, the first below-the-knee amputee to compete against able-bodied runners at the Olympic games. After Pistorius’ history-making run in 2012, the International Association of Athletics Federations (now World Athletics) ruled that, going forward, athletes using “mechanical aids” must provide evidence that their blades do not give them a competitive edge. 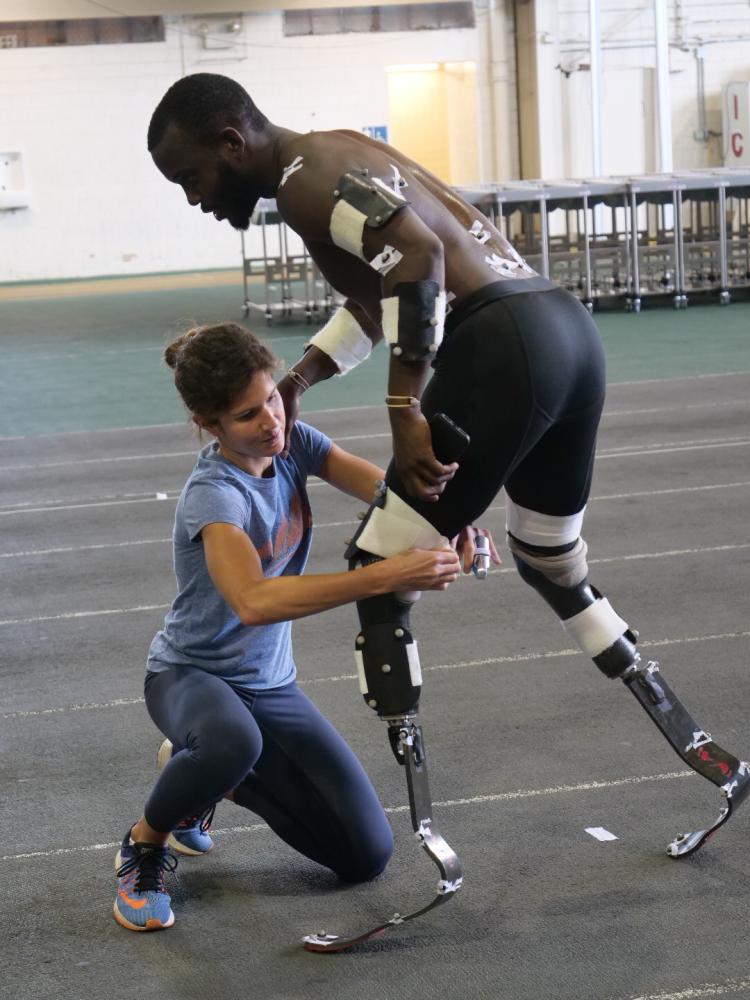 Blake Leeper, paralympic medalist and double amputee, gets tested and trains with Alena Grabowski, associate professor of integrative physiology at CU Boulder, over the course of several days in August 2018. Photos by Glenn Asakawa/CU Boulder.

So Leeper enlisted Grabowski, an expert in running prostheses biomechanics who had collected similar data on Pistorius years earlier. On the treadmill and track, researchers measured Leeper’s acceleration out of the starting blocks, maximum speed along straight-aways and around curves, velocity at aerobic capacity and sprint endurance (all-out effort). They took the top metrics from all available data from elite bilateral amputees and compared them to the top metrics from non-amputees.

Instead of having an advantage, athletes using prostheses were 40% slower out of the starting blocks, had 19% slower velocity at aerobic capacity and were 1 to 3% slower around curves compared to non-amputees.

The authors presented preliminary results to the Court of Arbitration for Sport in 2020 but the court ruled that Leeper could not participate in World Athletics-sanctioned events, including the Olympics, because his prostheses made him too tall.

“A lot of assumptions have been made about running prostheses and performance with no data to support them,” said senior author Grabowski. “With this study, we show that the use of running prostheses provides no competitive advantage over 400 meters compared to biological legs.”
News Articles
More Articles All Articles
About